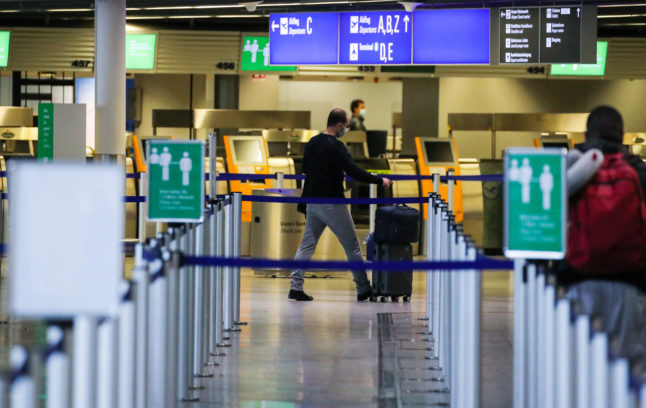 What happens if you overstay your 90 day limit in Italy? Photo by Armando BABANI / AFP.

The 90-day rule has long applied to non-EU nationals like Americans, Canadians and Australians and since Brexit it also applies to Brits.

However it’s not always clear what happens to people who overstay, and whether the rules are being strictly enforced on the ground.

What is the rule?

Non-EU nationals, including Brits, can stay for 90 days out of every 180 in the EU without needing a visa or a residency permit. This can be in the form of one long stay or several short stays.

The limit is for time spent within the EU, so you cannot simply move to a different EU country, you need to leave the Bloc altogether and go to a non-EU country.

This does not apply to people who live in Italy and have a residency card.

Brexit: How Brits can properly plan their 90 out of 180 days in Italy and the Schengen zone

If you want to stay longer than 90 days – either because you are moving to Italy full-time or because you want longer visits – you will need to get a visa.

You can find full details on the types of visa HERE, but the key thing is that visas must be applied for in advance from your home country – you cannot come to Italy and then apply in order to extend your 90-day stay.

What are the penalties for people who overstay?

If you spend more than 90 days in the EU or Schengen zone without a visa or residency permit then you are officially an overstayer. And unlike the pre-EU days when passport control consisted of a man in a booth with a rubber stamp, scanning of all passports on entry/exit of the EU makes it pretty easy to spot overstayers.

This is set to become even more stringent when the EES scheme comes into effect next year – full details on that HERE.

READ ALSO: Visas and residency permits: How to move to Italy (and stay here)

The EU lists a range of possible penalties although in practice some countries are stricter than others.

Within the system, anyone who overstays can be subject to the following penalties:

Deportation – if you are found to have overstayed, countries are within their rights to either imprison you and deport you, or give you a certain number of days to leave. In practice, deportation is rare for people who aren’t working or claiming benefits, they are more likely to be advised of the situation and told to leave as soon as possible.

Fines – fines can be levied in addition to other penalties and vary according to country. In Italy, those found to have overstayed their visa as a result of border checks conducted while they are voluntarily leaving the country of their own accord are not subject to any fine, but those caught overstaying their visa on Italian soil theoretically face both an expulsion order and a fine of between €5,000 and €10,000.

READ ALSO: What type of visa will you need to move to Italy?

Entry ban – countries can impose a complete ban on re-entry, usually for three years although it can be longer. A complete ban is usually only put in place for people who have over-stayed for a significant amount of time.

Difficulties returning to the Schengen area – even if you avoid all of the above penalties, the overstay alert on your passport will make it more difficult for you to return to the EU, and this applies to any EU or Schengen zone country, not just the one you over-stayed in. People who have this alert on their passport are likely to face extended checks at the border and may even be turned back. You will also likely encounter difficulties if you later apply for a visa or residency.

People who simply stay in an EU country without securing residency become undocumented immigrants and will not be able to access healthcare or social security provisions. If caught, they face deportation.

How is Italy really enforcing these rules?

Among EU countries Italy has a reputation for being among the less strict, and deportations are rare for people who are not working or claiming benefits, unless they have been in Italy for many years without the correct papers.

If it’s a question of simply over-staying by a few weeks it’s very unlikely that police will come to your home and deport you.

However, that doesn’t mean that there are no consequences of your over-stay – what’s likely to happen is that you will be caught next time you leave Italy.

Passports are stamped and scanned on entry, which means that border officials can see how long you have been in the country – if your arrival date was longer than 90 days ago you are likely to be flagged as an overstayer.

While in Italy this shouldn’t lead to a fine, there’s a possibility you may be banned from re-entering the country.

A re-entry ban can be either for a limited time period or indefinitely and even if you avoid a ban your passport is likely to be stamped as an over-stayer, which can lead to complications for further travel anywhere within the EU.

What’s in the law?

The Elections Act 2022 introduced several changes to the current legislation on electoral participation. Among these, it removed the rule by which British citizens lose their voting rights in the UK if they have lived abroad for more than 15 years

The new rules also abolished the requirement to have been previously registered in the UK electoral roll to become an overseas voter. In addition, the registration in the electoral roll will now last up to three years instead of only one year.

It is estimated that these changes could increase the number of overseas voter registrations by some 3 million. But the way new measures will be applied in practice is still to be defined.

Under the new law, Britons living abroad will have to register to vote in the last place they were registered in the UK. This means that people who have never lived in the UK will be ineligible to vote, regardless of how long they have been overseas, while those who left when they were children will be able to use a parent or guardian’s address.

But given that the UK does not require residents to register with local councils, how to prove previous UK residence? “Typical documents accepted as a proof of residence are Council tax or utilities bills, but not everyone will have them or will have kept them in an international move,” says Fiona Godfrey, co-founder of the British in Europe coalition.

Ballot papers are pictured in stacks in a count centre as part of the 2019 UK general election. (Photo by ANDY BUCHANAN / AFP)

Other questions concern how people will effectively cast their ballot. UK citizens overseas will be able to vote by post or by proxy or in person at their polling station if they are in the UK at the time of the election. However, few people are likely to travel to the UK for an election and in the past there have problems and delays with postal voting.

The Electoral Commission has recommended that overseas electors appoint a proxy to vote on their behalf. But who could that be for people who have been away from their constituency for a long time?

New secondary legislation will have to answer these questions, defining how to be included in the electoral roll and how to exercise the voting right in practice.

According to British in Europe, the government should present draft legislation in the first half of the year so that the parliament can adopt it before summer and registrations of overseas voters can start in the autumn.

British in Europe are currently running a survey to understand the difficulties UK citizens abroad may face in the registration and voting process, as well as their intention to participate in elections.

The survey asks for instance which documents people can access to prove their previous residence in the UK, what problems they had voting in the past, and if and how they plan to vote in the future.

“We need to get an up-to-date picture of British citizens living around the world and have information to make recommendations to the government, as it prepares secondary legislation,” Godfrey said. “If millions of people will exercise their voting rights, there will be consequences for council registration offices, post office and authorities that will manage the process, among other things” she argued.

The right to vote concerns only UK parliamentary elections and national referendums, not elections in the devolved administrations of Scotland, Wales and Northern Ireland, or at local level.

The survey is open to UK citizens living anywhere in the world and is available at this link.