On Saturday December 4th the British government announced it would demand pre-departure tests for all arrivals from 4am on December 7th onwards.

These tests, which were scrapped only weeks ago, must be taken within two days of travel to the UK. They can be PCR or antigen tests and must be carried out by all travellers regardless of their vaccination status.

The requirement applies for those arriving in England, Scotland, Wales and Northern Ireland

On November 27th the UK Prime Minister Boris Johnson announced that PCR tests and self-isolation for UK arrivals would be reintroduced amid concerns of the new Omicron variant that was first identified in South Africa and has now been found in several people in mainland Europe and the UK.

The requirements came into force at 4am on Tuesday, November 30th.

This means that if you’re arriving in the UK after 4am on Tuesday, November 30th, you need to book and take PCR tests instead of lateral flow tests, which will no longer be accepted.

You’ll need to take a PCR test by the end of the second day after arriving in the UK and self-isolate until you get a negative test result.

This means you can only leave home if you need to buy essential supplies, such as food or medication (but only if no-one else can buy them for you), to take a test or for urgent medical care.

The potential problem with this change is that the UK testing system has been beset with problems.

For example, at least one private testing company is being investigated for failure to deliver PCR test results on time – or in some cases at all – meaning people could be stuck in quarantine for a long time.

And another is being looked into for providing thousands of incorrect negative results.

And Which? travel editor Rory Boland expressed concern about the testing companies and how they would cope with the additional demand, as he details in the below tweet, meaning people could be stuck in quarantine for days.

People regularly report missing test results, companies that never reply when you have a problem and fake prices from firms that don't exist.

When you do take a test, the UK government only carry out genomic sequencing on a handful of results submitted.

Forms to fill in

If you’re due to arrive before 4am on November 30th, you can complete the required Passenger Locator Form now, but if you’re arriving after that time, you’ll need to return to the website after 4am on Monday, November 29th as the system is being updated.

You need to fill one of these forms in, even if you’re just passing through the UK, and it needs to be completed 48 hours or less before you start your journey.

However, a few things remain unclear, including what the requirements are for people who are entering the UK for less than two days, and whether these could rule out short business trips.

The government is expected to reveal further details this week and we will be update this article as soon as further information is available.

Wearing face masks on public transport and in shops will also be mandatory again in England from Tuesday.

They are still required in Scotland, Wales and Northern Ireland on public transport and many indoor spaces. 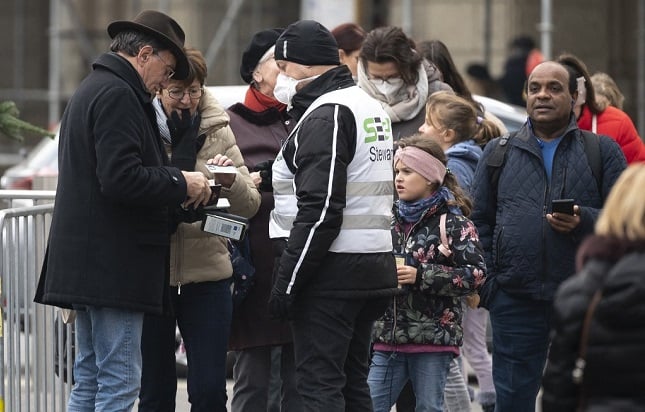 ACROSS EUROPE
Mandatory jabs and restrictions: How Europe is responding to the new wave of Covid

Spanish Health Minister Carolina Darias on Thursday confirmed that face masks would no longer be compulsory on public transport, a measure which has been in place in Spain for almost three years.

“I will raise the proposal of eliminating the mandatory use of masks on public transport”, she said, adding that next week she will convene with the Interterritorial Council of the National Health System to “put this measure into effect”.

Darias did not specify exactly when this would happen, although government agreements are usually approved the following day in the Official State Gazette (BOE), so the official end to the mask rule looks set to be on February 8th.

The minister did clarify however that masks would still be mandatory in health settings such as health centres and hospitals “as health experts advise”.

Last week, Darias reported the possibility of eliminating the mandatory mask rule in pharmacies, but this is currently being “weighed up” by health experts.

Manuel Franco, an expert in Public Health and a member of the Spanish Society of Public Health and Sanitary Administration (Sespas) explained that “the World Health Organisation (WHO) is already considering the decision to lift the public health emergency warning for Covid-19” and adds that “if this goes ahead, it would make no sense to maintain the mask rule”.

The use of masks ceased to be mandatory outdoors almost a year ago, on February 10th, 2022.

Then, two months later on April 20th, the government announced they wouldn’t be required indoors either, except in health centres and on public transport.

The latest bulletin of Sentinel Surveillance of Acute Respiratory Infection in Primary Care (ARIs) and in Hospitals (SARI), announced a drop in infections and hospitalisations and said that the rates for Covid-19 remain stable.

The decision to end the mask rule in February comes after health experts who advise the Spanish Ministry of Health said that masks should no longer be required on public transport.

On Wednesday, January 25th the director of the Health Alerts and Emergencies Coordination Centre of the Ministry of Health (CCAES), Fernando Simón, assured that the end of the mask rule on transport would be announced “shortly” either “next week or the following”.

Then, on Thursday morning, government spokesperson, Isabel Rodríguez, stated that the decision to remove the mask on public transport would be taken “immediately, when possible”, but pointed out that the government was looking at the situation in China first.

ACROSS EUROPE
Mandatory jabs and restrictions: How Europe is responding to the new wave of Covid
Url copied to clipboard!