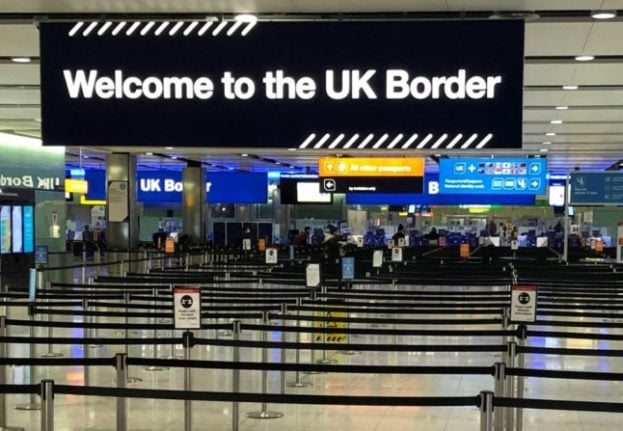 The UK government announced its relaxed Covid travel rules on Friday with the main change being that vaccinated travellers from Europe to England would no longer need to take pre-departure tests, and can use cheaper lateral flow (antigen) tests for their ‘Day 2’ test after arriving.

Unvaccinated travellers from Europe would still need to quarantine for 10 days, take a pre-departure test as well as PCR tests on day 2 and day 8 after arrival.

The changes come into force from October 4th.

However while the announcement spelled good news for most travellers who had been vaccinated in Europe, the UK did not announce any change to is rule that those who have had Covid and one dose of a vaccine are not considered “fully vaccinated” for the purposes of travel to the UK.

It also wasn’t clear whether those who have had mixed Covid vaccines would still face quarantine, despite being fully jabbed.

The UK’s Department of Health and Social care confirmed to The Local that there was no change to the current policy or relaxation of rules regarding those who had received mixed vaccine doses in Europe.

So as it stands anyone who had one dose of Astra Zeneca and then a dose of Pfizer or Moderna in a European country is not considered fully vaccinated by the UK government.

The current rules are:

However the British embassy in both Germany and France have said that from October 4th the UK will accept those fully vaccinated with mixed doses.

“From 4 October travellers who have had a mix of eligible 2 dose vaccines (e.g. a combination of AstraZeneca and Pfizer BioNtech) will be recognised as fully vaccinated,” says the British embassy.

We have asked the UK’s Department of Health to clear up the confusion once again.

In several European countries mixing of vaccines has been quite widespread, particularly for those who had a first dose of the AstraZeneca vaccine before guidelines on its use in individual countries changed.

There is no credible medical evidence that individuals who had two different brands of Covid vaccine are less protected against the virus, in fact some studies have suggested better protection from mixing and matching doses.

The UK’s current rules on mixed vaccines have caused anger to the thousands of vaccinated travellers who still cannot visit the UK without having to quarantine and take expensive tests.

One reader told The Local: “My partner, a British national with mixed vaccines, feels like a second class citizen and hasn’t seen her family since December 2019.”

These rules at present affect only arrivals in England, the devolved nations of Scotland, Wales and Northern Ireland have so far not indicated a change to their definitions.

The so-called “bivalent: shots, approved by the European Medicines Agency earlier this month, target the BA.1, BA.4 and BA.5 Omicron variants, now responsible for the bulk of new cases since the outbreak began worldwide in early 2020.

French authorities are urging at-risk patients — including those over 60 or adults with pre-existing conditions — to get the bivalent vaccines as part of its booster campaign.

“The number of infections has again started rising in the past few days,” the HAS health authority said, noting that the BA.5 sub-variant was causing the most new cases.

The new vaccine targeting the highly contagious BA.4 and BA.5 types is made by Pfizer and BioNTech, while jabs from Pfizer/BioNTech and Moderna are for BA.1.