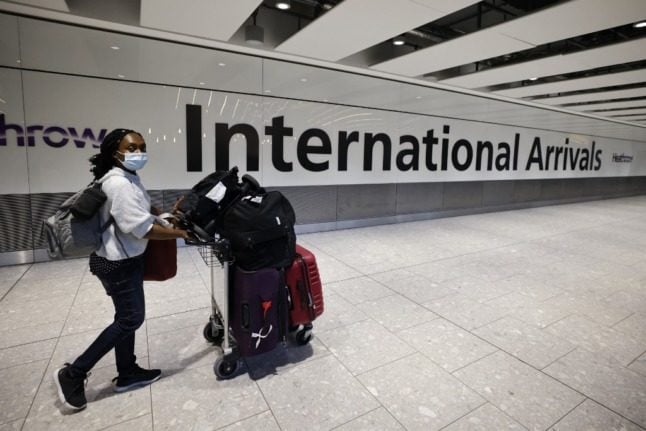 The shake up of the much-maligned Covid travel rules for entering UK countries comes into force on Monday, October 4th.

The new measures are initially only applicable for travel to England but the devolved nations of Scotland, Northern Ireland and Wales are likely to follow suit.

Travellers heading from European countries to the England should take note of the following changes:

France is in the grip of a major confrontation between unions and the government over plans to reform the pension system.

So far, the main actions have been concentrated on one-day strikes that are supported by all eight of the union federations, however an increasing number of unions are filing notices for renewable or unlimited strikes, with some targeting the February holidays.

The French minister of tourism, Olivia Gregoire, called on unions to respect the “sacred period” of school holidays (which in France run from February 4th to March 6th, depending on which zone you are in).

Meanwhile, Philippe Martinez, the head of the hardline CGT union, told RTL that if the government remains stubborn then “there is a possibility of days of action during the school vacations”.

As a result, it is likely that further notices will be filed.  The Local will update this story with the latest – but here’s what we know so far.

Tuesday, January 31st – this is the next one-day mass strike, which will likely see severe disruption on many services, particularly public transport – full details here.

Trains – two rail unions – the hardline Sud-Rail and CGT-Cheminots – have filed a renewable strike notice for “mid-February” in addition to a two-day strike which is to take place on Tuesday, February 7th, and Wednesday, and 8th.

Ski resorts – two of the largest unions representing French ski lift operators and seasonal workers, FO (Force ouvrière) and the CGT, have filed “unlimited” strike notices starting on January 31st – the same day that unions across other sectors have called for another ‘mass strike’.

This doesn’t necessarily mean that the strike will continue throughout February, but unions say they want to put pressure on the government to discuss both pensions and changes to benefits for seasonal workers, which particularly affect ski industry employees.

The CGT union in particular has threatened further actions during the Ski World Championships, held in Courchevel from February 6th to February 19th. Strikes in ski resorts usually primarily affect the operation of ski lifts. You can read more here.

The national union coordinator for French oil giant, TotalEnergies, Eric Sellini, told AFP that these actions would result in “lower throughput” and “the stoppage of shipments.”

The most concrete effect of this is likely to be shortages of petrol and diesel at some filling stations if the blockades are successful in stopping supplies leaving the refineries.

Power cuts – the hardline CGT have also threatened more “direct action” with employees of the State electricity sector threatening to cut the power to certain towns. This isn’t a scheduled action (or indeed a legal one, the government has promised to prosecute workers who do this) but short targeted power cuts could continue into February.

UK border – finally, if you are travelling to or from the UK, be aware that a UK Border Force strike is planned for February 1st and 2nd, which is likely to increase waiting times at the border.

We will update this story as more details are released, and you can also find all the latest in our strike section HERE.