The story of how Dante’s remains came to be in Ravenna isn’t that complicated. It’s how they came to stay there that gets strange.

When the poet died, sometime between September 13-14th, 1321, he hadn’t seen Florence for some 20 years. Exiled for life after finding himself on the losing side of a war for control of the city, Dante spent the next several years roaming, defiantly refusing conditional offers to return home on terms he saw as unjust.

He eventually settled in Ravenna, in present-day Emilia-Romagna, at the invitation of its ruler.

He had lived in the city for just three years when he died aged 56. But his body was in Ravenna, and Ravenna wasn’t about to let it go.

Dante was buried by the church of San Pier Maggiore (now the Basilica di San Francesco) with all the pomp that Ravenna could muster. After a funeral attended by the city’s great and good, his body went into a Roman marble sarcophagus that was laid to rest outside the church’s cloisters.

And there it remained for the next 160 odd years, undisturbed but for the addition, in 1366, of an epitaph by fellow poet Bernardo Canaccio, who couldn’t resist including a dig at Florence:

” … here I lie interred, Dante, an exile from my homeland, he who was born of Florence, an unloving mother.”

Meanwhile that “unloving mother” was growing distinctly fonder of her lost son. Fellow Tuscan poet Giovanni Boccaccio, who along with Petrarch would follow Dante’s precedent of writing in the vernacular instead of Latin, wrote texts and gave lectures in praise of his idol, whose reputation was gathering weight across Europe.

All the praise seems to have reminded the Florentines of the Dante-shaped hole in their cemetery. Seventy-five years after the poet’s death, the city made its first documented request for Dante’s remains. It would prove the first of many.

In 1396 Ravenna said no. In 1430, Florence asked again. Ravenna again declined. In 1476 Florence tried a third time – and for the third time, Ravenna turned them down.

So it looked rather like a taunt when the governor of Ravenna decided, in 1483, that the city’s most illustrious corpse ought to occupy a more prominent position. That year Dante’s sarcophagus was moved to the other side of the cloister and a sculptor commissioned to make a marble bas-relief of the poet at work. But the mighty Republic of Florence had bigger guns to use. The Medici, Florence’s original power dynasty, were about to assume the ultimate authority: the papacy. Giovanni di Lorenzo de’ Medici was appointed Pope Leo X in 1513 and what previous delegations had proved unable to achieve by diplomacy, he could demand by papal decree.

In 1519, at the request of Florentine intellectuals and artists, Leo X granted his fellow townspeople permission to go to Ravenna and fetch Dante’s remains. The poet was to return to Florence and be laid to rest – for good this time – in a spectacular monument designed by none other than Michelangelo, Tuscan, sculptor, painter, poet and patronee of the Medici.

A delegation set forth for Ravenna. It arrived at the church of San Pier Maggiore, with the weight of the Catholic Church and one of Europe’s most powerful families behind it. The delegates ordered the sarcophagus opened. Dante’s remains were… not there.

The Franciscan brothers, whose order had been guarding Dante’s tomb for nearly 200 years by this point, had got wind of the papal mission and tunnelled a hole through the wall of their monastery into the sarcophagus. They stashed the poet’s body inside the gap, all without being spotted from the outside.

The Florentines’ reaction to finding Dante gone isn’t recorded, but it’s safe to bet they were pretty riled. According to some versions of the story they found themselves in the awkward position of not being able to report the body missing, since doing so would involve admitting they had thrown open the tomb with the intention of stealing it.

Ravenna took note and moved Dante’s remains inside the cloisters for safe-keeping, where monks guarded them jealously for another 150 years. On October 18th, 1677, a friar named Antonio Santi put them into a wooden chest (we know because he left a note), and in 1692 it’s recorded that workers carrying out repairs on the sarcophagus were supervised by armed guards to make sure they didn’t try anything.

By the late 18th century plans were afoot to give Dante a more imposing tomb. In 1781 a local architect commissioned by Ravenna’s Catholic authorities completed a small neoclassical mausoleum, lined with marble and topped with a dome, that would house the original sarcophagus and 15th-century bas-relief. So that no one could be in any doubt, it was inscribed: “DANTIS POETAE SEPULCRUM” (“Tomb of Dante the poet”). 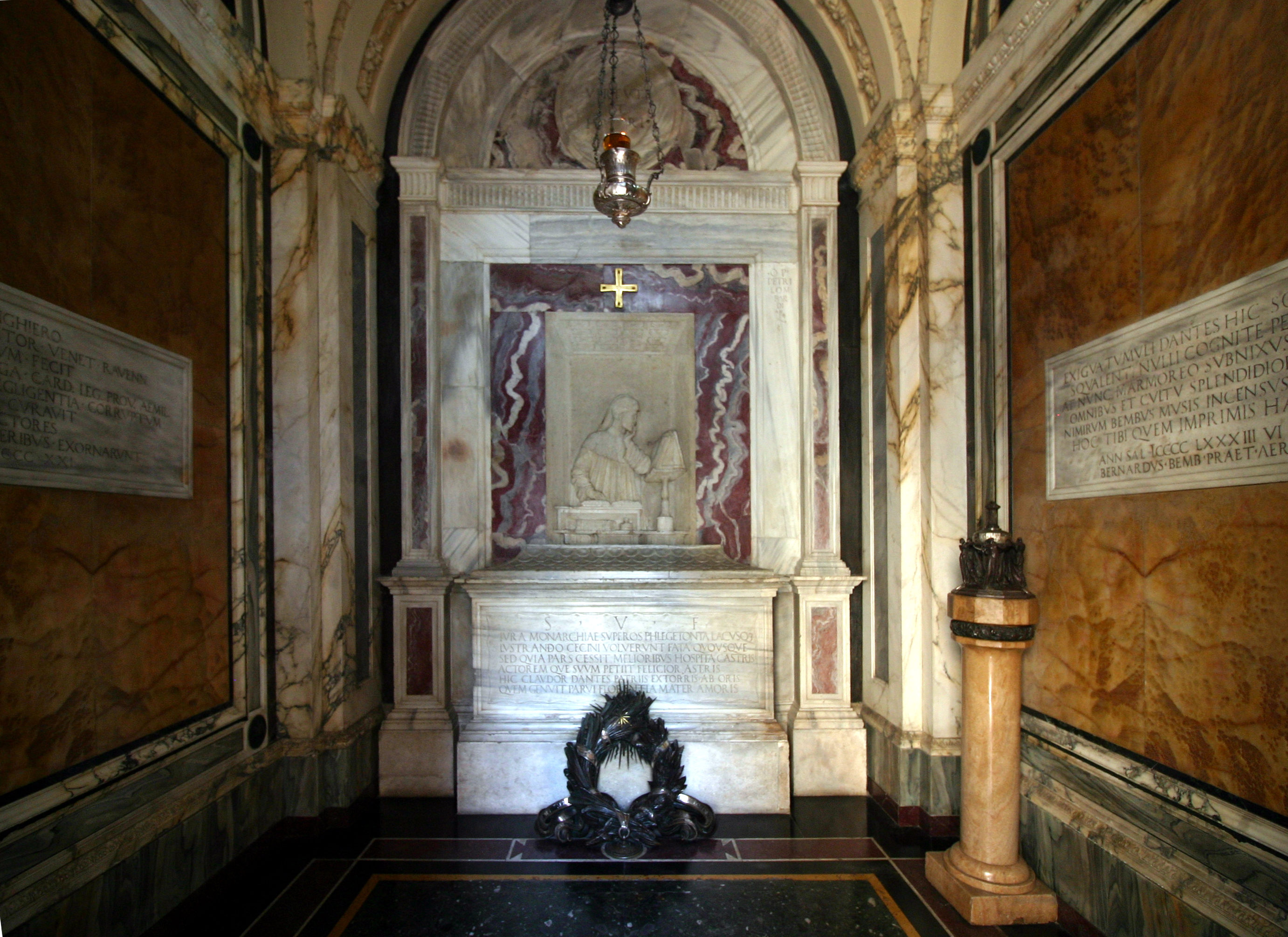 Accounts diverge at this point: either the monks neglected to mention that they’d hidden the bones and quietly let the new tomb go empty, or they returned the bones to the sarcophagus. But even if they did, they wouldn’t stay there for long.

This time the threat didn’t come from Florence, but from France. When, in 1805, Napoleon declared himself “Emperor of the French and King of Italy” and occupied the north-east of the peninsula, Ravenna fell under the Frenchman’s rule – and Dante’s custodians became increasingly concerned about their new masters.

As Napoleon’s armies seized property from religious orders up and down their new territory, the friars of San Francesco found themselves forced to abandon their monastery, but not without taking measures to ensure that the poet’s remains didn’t become part of the booty. In 1810, after less than 30 years in his new mausoleum (if he’d ever been there in the first place), Dante was gathered up and put back in the same wooden chest in which he’d spent most of the 18th century.

The casket was hidden in a wall of the chapel and the gap sealed. The friars fled, without leaving any record of what they’d done or where to find the bones.

In another few years the French would have left Italy, but Ravenna’s old rival remained. As the 500-year anniversary of Dante’s death approached, it was time for Florence to revive its claims to Dante yet again.

The city pointedly commissioned a tomb of its own in the Basilica di Santa Croce, this one much grander than Ravenna’s. The poet sits pensively atop a tomb, statues of Italy and Poetry in mourning on either side. The inscription reads: “Honour to the most illustrious poet”, a quotation from Canto IV of the Inferno – which, as all good Dante scholars know, continues: “His shadow, which had departed, now returns.”

Ravenna can’t have missed the point, but chose to ignore it. As impressive as it was, Dante’s tomb in Florence was to lie empty from its completion in 1830 right up until today.

READ ALSO: Why a discovery at Verona University could change the story of Dante’s life

But meanwhile, his Ravenna monument was also empty. For several decades in the 19th century, Dante was in the bizarre position of having two tombs and not being in either of them. Not that most people were any the wiser: his acolytes continued to make their pilgrimages to the mausoleum in Ravenna to pay homage to the poet, not realizing that all the while he was several metres away inside a chapel wall.

And there he might have remained had a labourer not uncovered the chest during work on the basilica in 1865, and had a sharp-eyed student not spotted Friar Santi’s note labelling the box “Dantis ossa” (“Dante’s bones”).

The contents were subsequently handed to doctors for examination, who pronounced them to be the almost intact skeleton of an older man between 165-170 centimetres tall, with a “larger and more beautiful” than average skull that they took to indicate superior intelligence. The bones were transferred to a crystal case and placed on public display, where they attracted large crowds of admirers. Then they were moved to a heavy wooden casket lined with lead and put back where they were supposed to be all along, in the mausoleum.

But, incredibly, it wouldn’t be the end of their travels. Having survived Florentine appeals, papal machinations and Napoleonic incursions, Dante’s remains would face one last threat: World War II.

In March 1944, with northern Italy occupied by the Nazis and the Allies attempting to bomb them out, the poet’s bones were moved once more – this time to a patch of earth in the basilica’s garden, where they remained safely until hostilities ceased.

On December 19th, 1945, Dante was put back in his Ravenna mausoleum for the final time (we assume), and the grassy mound that sheltered him was marked with a plaque. As for his hometown, Florence has finally abandoned its hopes of seeing Dante return after death, contenting itself with the monument in its cathedral and a statue of the poet in the square outside.

If Dante wouldn’t come to them, however, the Florentines would send a little bit of Tuscany to him: each year the city sends local olive oil to burn in the lamp that lights Dante’s mausoleum.

Rest in peace, Dante – wherever you are.

This article was originally published in 2018.

A man was found dead on Saturday in the Hotel Continentale after a woman he was with cried out for help, according to unconfirmed media reports.

Italian news outlets have identified the victim as Ricky Bibey, a two-time Challenge Cup winner with Wigan Warriors and St Helens. Police have yet to confirm the dead man’s identity.

Super League tweeted it was “saddened to hear of the passing of Ricky Bibey”.

“We thank Ricky for his contributions to the game and send our condolences to Ricky’s family and friends during this time”.

Super League are saddened to hear of the passing of Ricky Bibey, aged 40.

We thank Ricky for his contributions to the game and send our condolences to Ricky's family and friends during this time. ❤ pic.twitter.com/hokOo8GPjh

A maid rushed in to find the 43-year old woman bleeding heavily from serious injuries, and she was rushed to hospital, La Nazione daily newspaper said.

Bibey, 40, appeared to have died of a heart attack, it said.

Other guests at the Continentale, just next to the Tuscan city’s famous Ponte Vecchio bridge, reportedly heard shouts coming from the room.