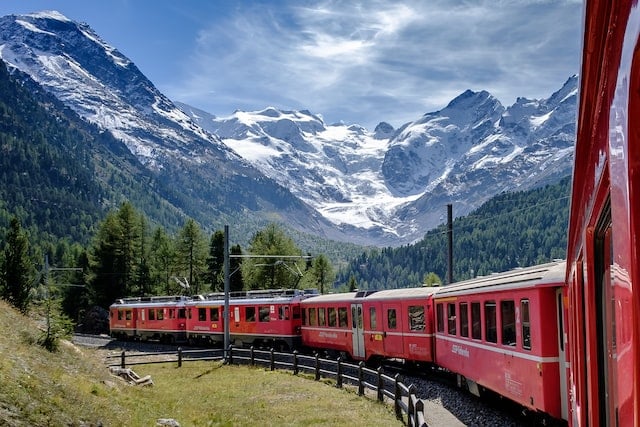 A Swiss train at the Montebello Kurve heading to Pontresina, Switzerland. Photo by Andreas Stutz on Unsplash

With an average of 48 trips per person taken in 2021, the Swiss hold the European record for train usage. It’s a very secure record, with twice as many trips taken by Swiss residents in relation to the closest contenders: Luxembourg (26), Austria (24), Denmark (23) and Germany (21).

However, the effects of the Covid-19 pandemic are still being felt, with 2021 figures for Switzerland 35 percent down on 2019. Many potential passengers are staying away, either working from home or prepared to sacrifice time in traffic to avoid mixing with crowds.

Although passengers inevitably grumble about delays, broken air-conditioning and crowded carriages, the Swiss network is about as good as it gets for train travel, this side of utopia. In terms of comfort, coverage, frequency, integration with the rest of the public transport system, and punctuality, the service is exceptionally good.

With punctuality at 91.9 percent across the entire network of passenger trains, according to Swiss Federal Railways figures, and connection punctuality at 98.9 percent, it is logical to assume that most of the daily 0.88 million passengers go home satisfied.

My minor complaint about Swiss trains is that it is socially acceptable to take off your shoes to put your stockinged feet on the seat. How about just no feet on seats at all?

My major complaint about Swiss train travel is that it is too expensive. A full-price, second class ticket from Bern to Zurich, for example, costs 51 francs. That’s a distance of about 120km, a one-hour journey.

There are ways around the high costs, if you’re in the know. Anyone who travels regularly by train in Switzerland would be mad not to invest in an annual half-price travel card, which costs 185 francs. The savings on a handful of return trips from Bern to Zurich would more than cover the cost.

There are also good savings to be made when booking in advance, the so-called Supersaver tickets, but these are only valid for the exact train booked so not useful if there’s any uncertainty in your plans. With a Junior card that costs 30 francs per year, children aged between 6 and 16 can travel free with their parents.

People who travel by train in Switzerland, but not frequently enough to buy the half-price card or the annual GA (unlimited) Travelcard for a jaw-dropping 3,680-francs, will find individual ticket prices painful.

Switzerland could learn from other countries

This is not the responsibility of the railways themselves but an issue of public policy. With such an excellent public transport network, why is it that two-thirds of journeys are still be made by car?

The Swiss don’t show any signs of giving up their love affair with the car. There were 4.7 million registered passenger cars in Switzerland in 2022 and 0.8 million motorcycles, out of a total of 6.4 million road vehicles. That’s an increase of 39 percent since the year 2000, clearly exceeding the rate of population growth over the same period which was 24 percent.

Switzerland could look over the border to Germany for inspiration on how to encourage more train use, where cut-rate travel deals have had an immediate and significant effect.

In response to the cost-of-living crisis and the energy crisis sparked by the war in Ukraine, Germany has taken radical steps on pricing to encourage more people onto public transport. The successful 9-euro monthly ticket for all regional travel, offered last summer, will be followed in spring 2023 by a special offer of 49 euro per month to cover all regional transport. Austria has taken a similar flat-rate approach.

This kind of action is currently absent in Switzerland, where people are used to paying high prices for everything. The constitution even stipulates that, “A reasonable part of the costs of public transport will be covered by the prices paid by users.”

This constitutional article (81a) has been quoted whenever campaign groups – in Zurich, Bern and Fribourg, for example – have attempted to introduce free public transport at a city or cantonal level. Recent proposals have been quashed by local government and have not made it to a public vote – yet. 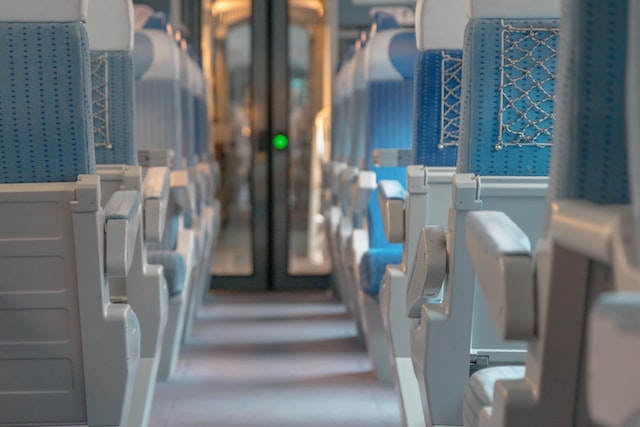 Seats on a train in Switzerland. Photo by Martin Adams on Unsplash

How can the Swiss be persuaded to ditch cars?

It is true that the Swiss have the power to change the Constitution by popular vote, if asked the right question, but voters tend to reject initiatives that are perceived as handouts.

There is a risk that offering something for free means it will sooner or later become underfunded, relying entirely on state subsidies. The experience of free public transport in Luxembourg since 2020, Malta last year and a number of European cities, including Tallinn, should provide helpful evidence on the outcomes.

One thing is certain, more needs to be done to incentivise people to ditch cars and embrace public transport, along with emission-free alternatives such as cycling. It would be great to achieve a happy medium for Swiss trains, a combination of good service and affordable prices.

If the various carrot and stick tactics work, and more people are persuaded to use Swiss trains, that will raise issues for capacity. What a good opportunity to scrap first class to make the best use of the available space.

I can see that this luxury is appreciated by business travellers and well-heeled retired people in particular, but there is nothing more annoying than having to walk through the rarefied atmosphere of half-empty first-class carriages to get to a second-class carriage where there is standing room only. 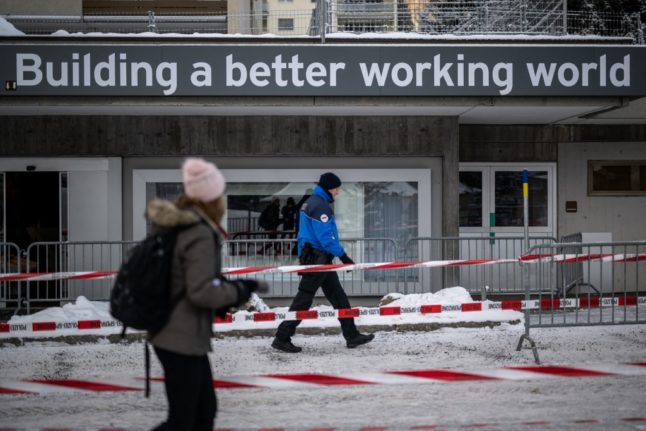 We already knew that Switzerland was a super place for the super-rich to live but now it’s official.

The latest government report on wealth distribution, published quietly without a press release last month, shows just how attractive it is.

Taking this measure of the proportion of wealth concentrated in the hands of the richest one per cent, Switzerland is an outlier in Europe. The 44 per cent rate is higher than in the United States, and more comparable to countries like Brazil and Russia.

The government figures are based on data collected from the cantons by the federal tax administration. Total assets minus debts are calculated but pension savings are not included in the calculation because they are not taxable and therefore not listed in tax declarations.

This trend of the mega-rich accumulating more and more wealth is well established in Switzerland. The bloating of the one per cent is now more extreme than at any time since the Second World War. Is this the kind of record Switzerland should be aiming for?

READ ALSO: Why is Switzerland so wealthy?

Because this phenomenon has not happened by accident. There is a long-standing trend of tax reduction supporting it. Wealth taxes have gone down consistently since the 1990s, led by centre-right parties, with the steady support of voters. Twelve cantons cut the tax rate for top earners in 2021.

An ongoing result of this favourable tax climate is that fortunes grow. Cantons compete among themselves to attract rich residents. This means ultra-rich Swiss people are not lured away from the country for tax reasons. Meanwhile, ultra-rich foreigners have compelling reasons to relocate to Switzerland.

There’s no doubt that Switzerland is a comfortable place for a super-rich person to settle. Beyond the tax regime and the some of the best views that money can buy, there are many other lifestyle and financial benefits.

The country has a long history of catering for every need of the super-rich, from healthcare to education to top class wealth management services. The luxury sector is highly developed, providing a perfect playground of shopping, dining and exclusive experiences.

READ ALSO: Swiss remain richest in world… but it’s not all good news

We have just emerged from a long phase of low-interest rates. When rates are low, asset prices go up. That means things like shares and property, which is what the rich hold. But even if it looks more dramatic than it is, it is still dramatic.

The data for this report only go up to 2018 so things might have changed somewhat. However, other reports have shown that the pandemic did not cause money to drain away from the one per cent. If anything, it worked in their favour financially.

On the face of it, having almost half the country’s personal wealth concentrated in the hands of so few people seems profoundly wrong.

However, according to a leading Swiss expert on wealth distribution, it is rather a net positive. These residents still pay tax and they spend money. “In a narrow national economic sense, it is a good thing to be an attractive place of residence for wealthy foreign nationals,” Professor Marius Brülhart of the University of Lausanne said.

“However, from a more broadly ethical, global point of view, you could ask whether it is fair to lure wealthy foreigners away from where they made their fortune. Those countries are then losing out on some of their most lucrative taxpayers.”

This issue of economic inequality has been debated for years. The wider social context is relevant. It matters a lot more that someone is sitting on a golden toilet when many in the same society are deprived of decent housing, healthcare or education.

READ ALSO: Swiss richer than ever but wealth inequality persists

In a country like Switzerland with a good social security system and generally good standard of living, you could say it’s tolerable for the rich to be left alone to get richer. In 2019, the average gross income of private households in Switzerland was 9,582 francs per month, with 31 per cent of that eaten up by compulsory deductions and health insurance.

It can be the case that the super-wealthy are blocking the dynamism of the economy by sitting on their billions. This feature of wealth inequality appears not to apply in Switzerland where the economy has had a great run over the past couple of decades.

There is also the concern of a small number of financially powerful people using their money to meddle in politics, but the Swiss direct democracy system mitigates that risk.

I hate to admit but, it is an advantage for Switzerland to have these people here rather than in Monaco or London. And it’s true that some individual municipalities benefit handsomely. IKEA’s founder, for example, famously donated 10 million francs towards a housing complex for the elderly in the village in Vaud where he lived for 37 years.

Not that we should rely on charity. It is up to voters to decide how much their rich neighbours must contribute to the public coffers – through the parties they vote for and how they vote on tax questions.

As long as Switzerland can afford to keep the Swiss and foreign one per cent happy, it will continue to do so. Whisper it from the rooftops: the rich are welcome in Switzerland.

TRAIN TRAVEL
‘We are supposed to be borderless’: Why train travel in Europe is not up to speed
Url copied to clipboard!