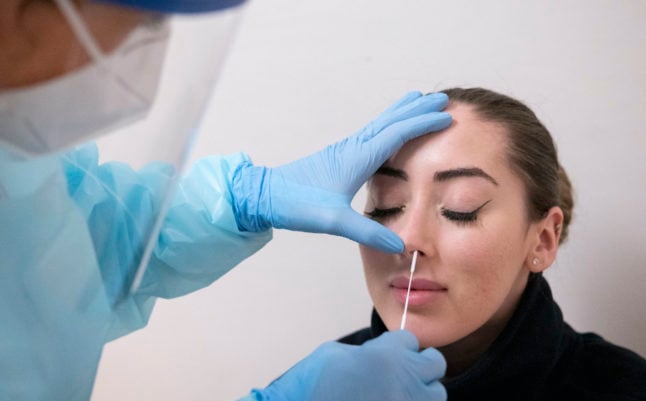 In a press conference, Health Minister Jakob Forssmed and Sara Byfors, head of department at the Public Health Agency, announced that travellers from China will need to show a recent negative test against Covid-19 upon arrival in Sweden from January 7th.

Sweden has also, as EU presidency holder, held a meeting of the Council’s crisis management mechanism IPCR where a common EU policy on entry restrictions due to the rapid increase in new Covid cases in China was discussed.

What do we know so far?

Forssmed stated that the requirement would come into force on January 7th and would last for three weeks. As there aren’t many direct flights from China to Sweden, this means in effect that travellers on the next direct flight arriving in Sweden will need to show a negative test.

This is due to a few factors, the Public Health Agency wrote in a previous statement, partly the fact that China has seen increased spread of infection since the beginning of December 2022 when it lessened restrictions somewhat, and partly due to the fact that there is not enough data on which variants of the virus are currently spreading in China and whether these are better able to evade vaccine protection.

It further stated that Chinese travel restrictions are due to change on January 8th, after being strict throughout the pandemic, which the Public Health Agency expects will lead to a sharp increase in travel from China.

Another factor which could be affecting this is the fact that one of the biggest social events in the Chinese calendar, Lunar New Year, takes place on the 22nd January, which will involve a lot of travel both to and from China, and the potential to spread the virus further.

This means, if you are planning to travel to Sweden from China, you will need to be able to show a recent negative test upon arrival in Sweden.

Forssmed further stated in the press conference that the negative test requirement will apply regardless of a traveller’s vaccination status.

Will there be a travel ban or vaccine requirement?

The government has not mentioned introducing a flat travel ban for travellers from China, such as the non-EU travel ban which was in place for much of the pandemic, which meant that even fully vaccinated travellers were unable to enter Sweden.

At the time of writing, it has only stated plans to introduce a negative test requirement – no vaccine requirement and no travel ban, although that doesn’t rule out the possibility that these could be introduced for travellers from China in the future.

What do you mean by a ‘negative test result’?

Forssmed stated that the requirement will cover travellers from China over the age of 12 who are so-called “third country” citizens, meaning non-EU, non-Swedish citizens resident outside of the EU/EEA and Switzerland.

Third country citizens resident in the EU/EEA will not need to show a negative test.

According to the Public Health Agency, the test should be no more than 48 hours old, and the certificate should be in Swedish or English. Both antigen and PCR tests are accepted, but they will need to be carried out by a medical professional who can provide a certificate, so at-home tests won’t count.

Having said that, Forssmed stated that this measure is part of a “common response at the EU level”, indicating a common EU plan to require a negative test for travellers from China entering the EU/EEA/Schengen.

This means that travellers from China via another EU country would most likely to have to provide a negative test at their point of entry to the EU regardless.

Will the government extend this test requirement to any other countries?

Currently, there are no signs that the government is planning to extend the test requirement to other countries. The press conference, a previous government statement, and the Public Health Agency’s recommendation to introduce testing for travellers from China only specifically refer to China due to the “increased and extensive spread of Covid-19 in the country”.

Unless other countries start to report similarly extensive Covid-19 outbreaks, it appears unlikely that the test requirement would be extended.

How much effect will this actually have?

“This should be seen as a possible infection control measure due to the fact that we don’t have much information on the epidemiological situation in China,” Byfors said.

“Not least, it would be relevant if there are other variants of the virus circulating there than in those in other parts of the world.”

Although the spread of Covid-19 is also high in Sweden, the Public Health Agency does not believe that an increase in travellers from China will affect the spread of infection in Sweden significantly. However, it states, a negative test requirement could delay or stop the introduction of a new variant to Sweden, lessening the burden on Swedish healthcare.

The above information was correct to the best of our knowledge at the time of publication. Please be aware that we are not a government authority and cannot issue any guarantees about whether or not you will be able to travel to Sweden. We always advise readers to also consult the official information on the Swedish border police’s website before travelling, which will be updated if a test requirement is implemented.

Travellers should also note that entry to Sweden is always at the discretion of the individual border officer, and entry rules may change at short notice. The Local cannot guarantee you will be granted permission to cross the border into Sweden. You are welcome to email our editorial team at [email protected] if you have questions, but please be aware that we cannot confirm that you will be able to travel to Sweden, and we may not be able to reply to every email.

The EU Entry/Exit System (EES) will record the biometric data (finger prints and facial recognition) of non-EU citizens travelling for short stays to the Schengen area (EU countries minus Ireland, Romania and Bulgaria, plus Norway, Iceland, Liechtenstein and Switzerland), each time they cross the external borders.

Fully digital, the system will enable the automatic scanning of passports replacing manual stamping by border guards. The data collected will be kept in a centralised database shared among the Schengen countries.

The EES was created to tighten up border security and will ensure the enforcement of the 90-day limit in any 180-day period for tourists and visitors. But it requires changes in the infrastructure at the external borders, including airports, and the setting up of a new digital infrastructure to connect authorities in participating countries.

Its entry into operation has already been delayed several times. The latest date for the EES launch was May this year, but last week European authorities decided to postpone it again “due to delays from the contractors”. It is now expected to enter into force at the end of 2023, as The Local reported this week.

“The EES will be a game changer for how the EU’s borders are managed. There are, however, a number of issues which must be resolved to ensure a smooth roll out and operation of the new system so that air passengers do not face disruptions,” a joint statement says.

Things to be resolved include a “wider adoption and effective implementation of automation at national border crossing points by national authorities, funding by member states to ensure a sufficient number of trained staff and resources are deployed to manage the EU’s external border, particularly at airports,” and the “deployment of sufficient resources” to help airports and airlines with new procedures.

Airlines also said there needs to be a public communications campaign to inform non-EU citizens about the changes.

In addition, industry groups called on EU-LISA, the agency responsible for managing the system, to “strengthen communication” with airlines and with international partners such as the US “to ensure IT systems are connected and compatible.”

The decision to postpone the EES entry into operation until after the summer “will give airlines, airports and EU and national authorities the opportunity to resolve these issues and ensure the system is fully tested,” the statement continues.

The EU-LISA is currently preparing a revised timeline for the launch, which will be presented for approval at the Justice and Home Affairs Council, the meeting of responsible EU ministers, in March 2023.