The Beckmann self-portrait that sold for a record price at a Berlin auction house. Photo: picture alliance/dpa | Britta Pedersen

As the hammer came down, the highest bid for Beckmann’s “Selbstbildnis gelb-rosa” (Self-Portrait Yellow-Pink) stood at 20 million euros ($21 million).

Beckmann’s work, which features the artist during his Dutch exile from Nazi Germany, is widely considered a masterpiece.

The sum was “the highest price that has ever been offered for a painting”, auctioneer Markus Krause told the room to applause.

Including fees, the price of the self-portrait will come to €23.2 million, according to the auction house Grisebach.

The previous German record was set in 2018 by another of Beckmann’s works, “Die Ägypterin” (The Egyptian Woman), which fetched €4.7 million.

The record price for a painting by the artist was set in 2017 when his work “Hölle der Vögel” (Bird’s Hell) — among Beckmann’s most important anti-Nazi statements  – sold at Christie’s in London in 2017 for £36 million.

Beckmann’s self-portrait was initially a gift to his wife Mathilde, known as Quappi, who kept it until her death in 1986. The picture had been in a private Swiss collection for decades, and not shown in public since the mid-1990s.

The painting was displayed behind glass at a public preview ahead of the auction to guard against vandalism by climate activists who have recently been targeting artworks.

Beckmann (1884-1950) enjoyed massive acclaim in Germany during his lifetime, with top dealers placing his work with private collectors and major institutions.

That was until the Nazi regime labelled his daring, politically charged art “degenerate” and removed his paintings from German museums in 1937.

Professionally thwarted and increasingly under threat, Beckmann left for Amsterdam, where he lived in self-exile for a decade before moving to the United States.

Beckmann would ultimately die in New York at the age of 66, of a heart attack on a sidewalk on his way to the Metropolitan Museum of Art.

Paintings by Beckmann, now considered one of the most important artists of the 20th century, have exploded in value in recent decades.

The most paid for an artwork this year was $195 million, for an iconic portrait of Marilyn Monroe by American pop art visionary Andy Warhol.

The bumper price tag is the second largest all-time behind Leonardo da Vinci’s “Salvator Mundi”, which sold in 2017 for $450.3 million. 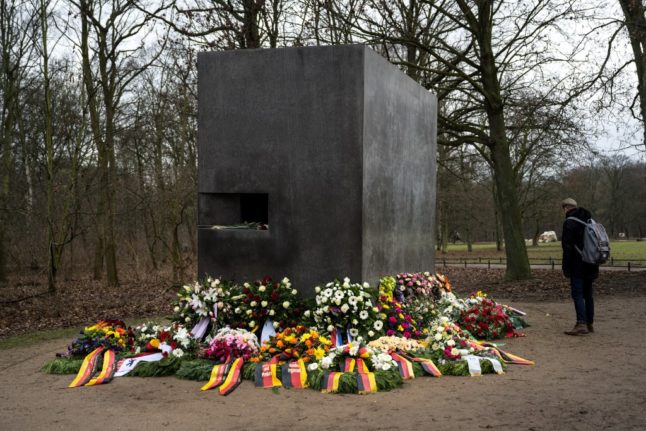 Campaigners worked for two decades to establish an official ceremony for LGBTQ victims of the Nazis, saying their experience had long been forgotten or marginalised.

Bärbel Bas, president of the Bundestag lower house, said queer survivors of the so-called Third Reich “long had to fight for recognition” of their
suffering.

She noted that gay men were murdered, castrated or subjected to horrific “medical” experiments in concentration camps where they formed the “bottom rung of the prisoner hierarchy”.

Thousands of lesbians, transgender people and sex workers were branded “degenerates” and also imprisoned at the camps under brutal conditions.

“We remember all people who were persecuted by the National Socialists – robbed, humiliated, marginalised, tortured and murdered,” Bas told the chamber of the glass-domed Reichstag building where Chancellor Olaf Scholz, his cabinet and MPs gathered.

Germany has officially marked International Holocaust Remembrance Day – the anniversary of Auschwitz’s liberation – since 1996 with a solemn ceremony at the Bundestag and commemorations across the country.

The event traditionally focuses on the Holocaust’s six million Jewish victims, although, at the first ceremony, then president Roman Herzog did also pay tribute to gay men and lesbians murdered under Adolf Hitler. 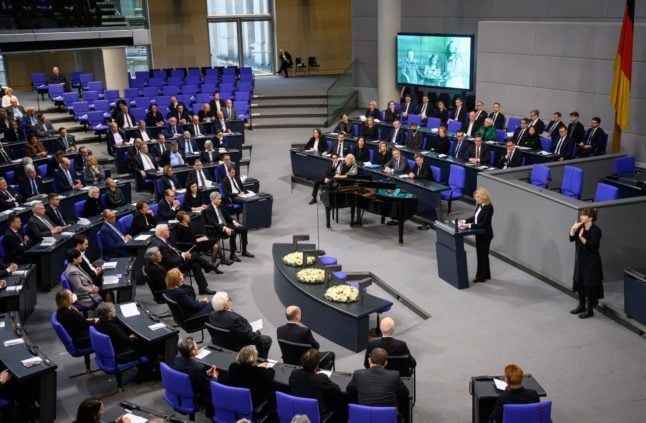 Dutch Jewish survivor Rozette Kats, 80, told the Bundestag that she welcomed the expansion of Germany’s culture of remembrance to include LGBTQ victims.

“If certain groups of victims are categorised as less worthy than others, it means Nazi ideology lives on,” said Kats, who lived out the Holocaust in hiding in Amsterdam while her parents were killed at Auschwitz.

Dani Dayan, chairman of Israel’s Yad Vashem Holocaust memorial, said that while Jews were the Nazis’ primary target, it was essential to recognise other groups.

“The Holocaust was an onslaught against humanity: LGBTQ individuals, Roma and Sinti, mentally disabled persons, but especially against the Jewish people,” he told AFP on a visit to Berlin this week.

“We respect and we honour all the victims.”

Actors read out the stories of Mary Puenjer, a lesbian from Hamburg who was gassed at the Ravensbrueck camp in 1942, and Karl Gorath, a gay man who survived Auschwitz only to be sentenced again for homosexuality in West Germany by the same judge who convicted him during the Nazi period.

Klaus Schirdewahn, who was found guilty in West Germany in 1964 of a sexual relationship with another man under a Nazi-era law still on the books, spoke of the shame he endured for most of his life.

“I am doing all I can so that our history will not be forgotten, especially at a time when the queer community is again facing hostility worldwide and also in Germany,” said Schirdewahn, 75.

For years it was rarely enforced and cities such as Berlin during the Weimar Republic had a thriving LGBTQ scene until the Nazis came to power.

In 1935 the Nazis toughened the law to carry a sentence of 10 years of forced labour.

Some 57,000 men were imprisoned, while between 6,000 and 10,000 were sent to concentration camps and given uniforms emblazoned with a pink triangle designating their sexuality.

Historians say between 3,000 and 10,000 gay men and an unknown number of lesbians and transgender people were killed or died of mistreatment.

Bas said it was a “disgrace” that queer people still faced state persecution after the war.

“By the time there were reparations, many (victims) were no longer alive,” she told AFP.

Section 175 was finally dropped from the penal code in East Germany in 1968. In West Germany, it reverted to the pre-Nazi era version in 1969 and was only fully repealed in 1994.

In 2017, parliament voted to quash the convictions of 50,000 gay men sentenced for homosexuality and offered compensation to victims.

Henny Engels of the German Lesbian and Gay Association rights group called Friday’s commemoration an “important symbol of recognition” of “the suffering and the dignity of the imprisoned, tortured and murdered victims”.