From prices increases to Christmas markets and possible strike action, December in Austria is set to be eventful. (Photo by Alexander Pöllinger / Pexels)

December in Austria is exactly how you would imagine it – twinkling lights, wintry weather and wafts of Glühwein in the air.

And this year, the festive season is set to be even more enjoyable after many Christmas celebrations were put on hold for the past two years due to the pandemic.

So if you’re planning to travel to Austria this December, here’s what to expect.

READ MORE: How to save money and still go skiing in Austria

There are currently no Covid-related travel restrictions for entering Austria.

Previously, people arriving in Austria had to show proof of vaccination, recovery or a negative test (known as 3G), but those rules came to an end in May.

This year will be the first Christmas season in Austria without Covid travel restrictions since December 2019.

Christmas markets are on

Another welcome return this year in Austria is the Christmas markets.

Last year, many markets around the country were cancelled after a snap lockdown in November, although some events still went ahead with strict rules in place.

But this year, the Christmas markets are back in full swing without restrictions, so make sure you visit one (or two) to really get into the Christmas spirit.

Austria’s most famous markets are in Vienna, like the Christkindmarkt in front of the Town Hall that runs from November 19 to December 26.

FOR MEMBERS: IN PICTURES: A guide to the main Christmas markets in Austria

The stressful days of pandemic lockdowns might be behind us (fingers crossed), but there are still a few rules in Austria to be aware of.

In Vienna, it is still mandatory to wear an FFP2 mask in pharmacies, on public transport and at stations. So if you arrive at Vienna International Airport and take public transport into the city centre, expect to be asked to put on a mask.

Nationwide, masks are also required at all health and care facilities, including hospitals and clinics.

Like in many countries in Europe right now, inflation is rising (see more on this below) and many workers unions are in the process of negotiating pay rises.

This has already led to a strike by rail workers at ÖBB, Austria’s national rail operator, on Monday November 28, with the possibility of further strike action if a deal can’t be reached.

Retail workers and beer brewers are also threatening to strike in early December for similar reasons.

So if visiting Austria in December, prepare yourself for some possible upheaval. Although the latest rail strike caused minimal disruption.

READ MORE: Train strike: What are your rights in Austria if your trip is cancelled or delayed?

Everything is more expensive

Inflation in Austria is currently over 10 percent, which has led to price increases for everything from daily groceries to energy bills and dining out.

Even the Christmas markets are more expensive this year due to higher prices for the Glühwein mugs. This means some markets in Vienna are charging almost €5 for the Pfand (deposit) for that first glass of mulled wine.

The same applies to ski resorts with hotels, lift tickets and restaurants all costing more this year.

READ ALSO: Reader question: Is travelling to Austria this winter worth it?

Besides Christmas (December 25) and Stephan’s Day (December 26), December 8, when Catholics celebrate the Feast of the Immaculate Conception (Mariä Empfängnis), is also a public holiday in Austria.

Of course, there are also several celebratory dates in December. For example, every Sunday until Christmas is an Advent Sunday, and Austrian families commemorate it in many ways, including lighting up candles.

On December 4, there is Barbaratag, while on December 5 Krampus pays his visit to Austrian villages and cities. On the next day, December 6, it’s time for St Nikolaus to bring chocolate and tangerines to children who were nice during the year.

It’s also worth noting that Austrians celebrate Christmas on the evening of December 24, usually with a family meal.

In some parts of Austria, like on high-altitude glaciers in the Alps, the skiing season is already underway.

Elsewhere, some resorts tentatively open in early to mid-December before the winter season officially starts at Christmas. So you can possibly save some money (and avoid the crowds) by going skiing earlier.

These off-peak rates don’t apply at all ski resorts but it’s worth checking before booking a trip to the mountains.

Expect lots of fireworks on New Year’s Eve (Silvester) in Austria – no matter where you are.

Most major cities have a large fireworks display planned for midnight on December 31 and hotels tend to book up quickly – especially in cities like Salzburg.

In Vienna, the bells ring out at St. Stephan’s Cathedral to welcome in the New Year, which is also broadcast on national television. This is followed by fireworks and some even take part in a communal waltz on Rathausplatz in front of the Town Hall.

But if you really want to celebrate New Year like an Austrian, then give a marzipan pig to your nearest and dearest. The little pigs represent a good luck charm and are handed out every year on New Year’s Eve. 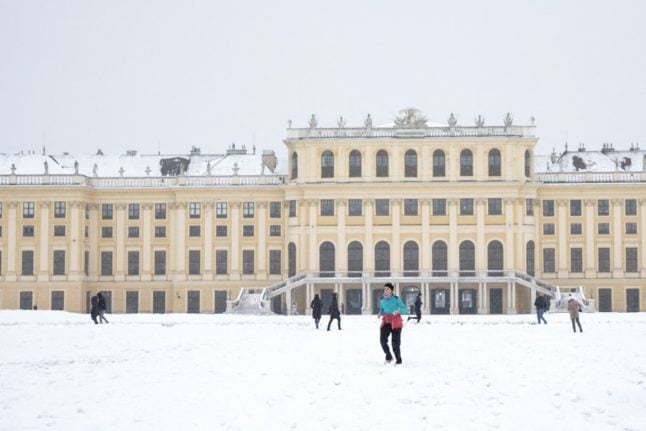 Vienna is a surprising city when it comes to weather and snow.

You can spend a week in the city in December amid sub-zero temperatures but not see any snow at all  – something that often surprises foreigners from warmer countries who associate Austria with mountains and skiing.

But then when snow comes the sight of Vienna under a white blanket is a sight to behold – even if the locals (not us) don’t seem to appreciate it. 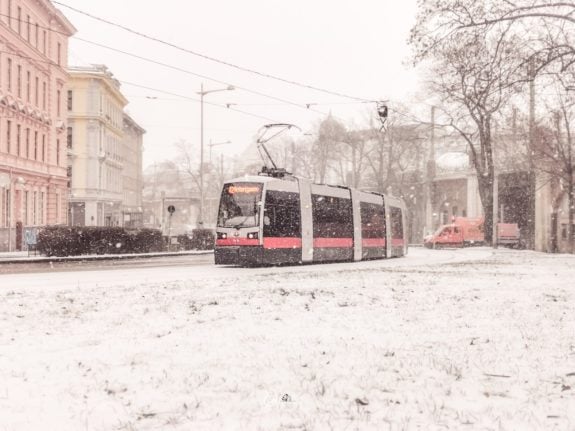 Austrians themselves love to hate the Viennese snow, joking that it is actually just “mud”. The truth is, it really doesn’t snow that often in the Austrian capital (the Hohe Warte measurement centre in Vienna recorded ten snow days in 2022, compared to 52 in Klagenfurt, 27 in Salzburg and 26 in Innsbruck).

It also doesn’t snow that much: the winter of 2021/22 saw only 31 centimetres of fresh snow, something that could fall in a day in a ski resort in the Austrian Alps.

However, when there is enough new snow to turn (parts of) the city white, certain areas are certainly better to explore than others.

It's a winter-ful life! ❄️ Who else spends Sunday as cuddled up as these ducks in front of the #Gloriette? 🦆

If you want to see the Stephansdom or the Vienna Opera covered in snow, it would have to be a tremendous snowstorm, subzero temperatures and even better if the snow was still falling. This is because the city centre is heavily urbanised and the asphalt and streets are treated so that snow melts faster.

The number of people walking by makes it harder to see that picture-perfect white snow.

However, some classic tourist attractions are greener and, therefore, can become whiter more easily.

For example, the palaces and parks of Vienna look beautiful when it snows. Schönbrunn, with its hundreds of square meters of gardens (plus a fantastic panoramic view up from the Gloriette), is always a popular spot when the snow falls, just as Belvedere, Stadtpark, the park in front of Rathaus and Prater.

Best places to play around

If your dream is to slide down a snow hill or build a snowman, Vienna’s many parks are the best places to go. Some beautiful examples in or around the city centre include Augarten, Prater, Schwarzenbergpark, Türkenschanzpark and Stadtpark.

By the outskirts, places like Roter Berg (you can check the video above) are very popular with kids, but even your small neighbourhood park might have great sledging spots, so don’t be shy to ask your neighbours.

READ ALSO: Six things to expect when you move to the Austrian mountains

Spots in the outskirts of Vienna

Other popular spots are in the Viennese surroundings or just a short drive away from the capital.

For example, the official trails of the City of Vienna lead you to several nature spots with panoramic views and guaranteed beautiful snow.

The Stadtwanderweg 8 is one of the best, with an observation deck and awesome spots to slide down from. The Stadtwanderweg 4 and 4a lead you up to Gallitzinberg, almost an Alpine peak (ok, not so much, but still beautiful).

Pictured is the view from Kahlenberg.

The mountains surrounding the city are also very popular, including Anninger, where you can walk through snowy forest paths and roads, and the very popular Schneeberg. Or, accessible via the city transport, the Kahlenberg.

Finally, a short trip leads you to spots such as Semmering (where the Viennese go for a quick ski trip) and the Rax, which you can go up via cable car.

Above, pictures posted on Twitter of a trip to Semmering on a snowy day.