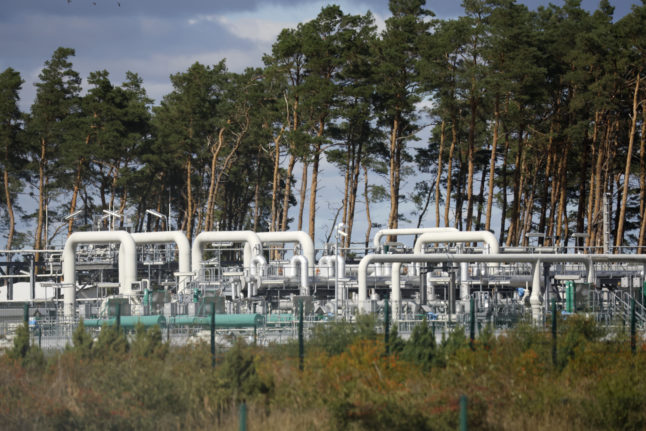 Pipes at the industrial plant of the Nord Stream 1 Baltic Sea pipeline in Lubmin, northeastern Germany, in August 2022. Sweden will no longer take part in a joint investigations of the Nord Stream pipeline links, according to reports in Germany on Friday. Photo: Odd ANDERSEN / AFP

“I have decided to together with the Security Service (Sapo) conduct a number of complementary inspections of the crime scene,” public prosecutor Mats Ljungqvist said in a statement (see here and here).

The Swedish armed forces have decided to assist the investigation following a request, Ljungqvist added, without giving any details as to what they were looking for.

Four leaks emerged on the two Nord Stream pipelines in the Baltic Sea off the Danish island of Bornholm at the end of September with seismic institutes reporting they had recorded two underwater explosions prior to the leaks appearing.

While the leaks were in international waters, two of them were in the Danish exclusive economic zone and two of them in Sweden’s.

In early October, the Swedish prosecution authority announced that they had collected “pieces of evidence” during an underwater inspection of the leaks in the Swedish economic zone, which had backed up suspicions of sabotage.

The new inspection comes as Sweden’s navy and the owner of the pipeline Nord Stream AG both announced earlier this week that they were conducting their own inspections of the burst pipelines.

Jimmie Adamsson, head of communications for the Swedish navy, confirmed they were at the scene with a ship specialised in diving operations and that they were supporting the prosecution’s new inspection.

But he stressed that it was not linked to the survey they had initiated on their own this week.

“The first investigation has not sparked the second, but they are two separate things,” Adamsson told AFP.

Nord Stream AG, which is majority-owned by Russia’s Gazprom, said Thursday that a “specially equipped vessel” had arrived at the location of “the pipeline damage in the exclusive economic zone of Sweden”.

The pipelines, which connect Russia to Germany, have been at the centre of geopolitical tensions as Russia cut gas supplies to Europe in suspected retaliation to Western sanctions over Moscow’s invasion of Ukraine.

Although they were not in operation when the leaks occurred, they both still contained gas which spewed up through the water and into the atmosphere.

The vigilance level has now been reduced to “green”, its second lowest level, after it was already lowered one step, from “orange” to “yellow” at the end of October, Energinet said in a statement.

The move followed a request from the Danish Energy Agency to lower the vigilance level after “an analysis of the threat level”, the grid operator explained.

Investigations by Danish and Swedish authorities have confirmed the leaks were due to sabotage and experts have said that only a state has the means to carry out such an operation.

But investigations have not identified who was responsible.

In early November, Moscow accused Britain of “directing and coordinating” the explosions.

The accusation was rejected as “distractions which are part of the Russian playbook” by a spokesman for British Prime Minister Rishi Sunak.

German Chancellor Olaf Scholz and Norwegian Prime Minister Jonas Gahr Støre announced at the end of November that they had launched an initiative within NATO to better protect maritime infrastructures.