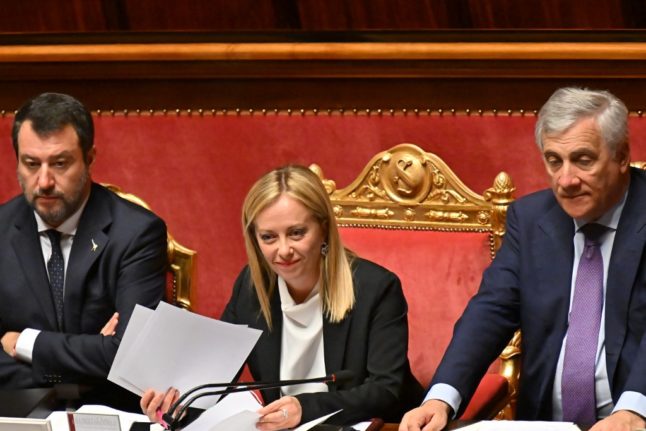 Giorgia Meloni’s government now has a full mandate after easily winning a confidence vote in parliament on Tuesday.

So what should we expect from the new administration? Here’s how things look so far.

What will the new government do first?

The new government take office at a particularly difficult time for Italy, and ministers will have a lot of major issues to tackle simultaneously: from the cost of living and energy crisis to the next budget, to relations with Europe and Russia’s war in Ukraine.

Outlining the government’s programme in her first speech to parliament on Tuesday, Meloni focused on energy costs, the economy, and Europe.

Recognising that soaring inflation and energy costs top the list of concerns among Italian voters, Meloni said her government would make a “massive financial commitment” to support families and businesses, even though this would “drain most of the available resources and force us to postpone other measures”.

The government needs to urgently submit its budget plan for 2023, and is expected to start work on a fourth aid bill to offset the rising cost of living, though neither were mentioned in Meloni’s speech.

How are they planning to tackle the cost of living crisis?

She did not detail in her speech any concrete measures the government plans to take immediately to cut the cost of energy for businesses and households, such as by extending the fuel discounts introduced by the previous administration.

However she mentioned long term plans to bring down energy costs by increasing Italy’s national production in order to become more self-sufficient.

She said the government plans to do this by increasing extraction from Italy’s offshore natural gas fields and stepping up renewable energy production in the south.

Her coalition parties had pledged sweeping tax cuts during the election campaign. Meloni did not mention this in her speech, but said the government plans to extend “corporate welfare”, cut tax on employees’ bonuses, and to extend the flat tax currently available to lower-earning freelancers to higher earners as well.

The government will meanwhile make major cuts to unemployment benefits, Meloni said, insisting that the only way out of poverty is work.

The planned cuts are expected to mean about 40 percent of current claimants can no longer access any form of unemployment benefit – even while a recession looms and hundreds of Italian businesses say they risk failing due to the energy crisis, leading to “hundreds of thousands” of job losses. 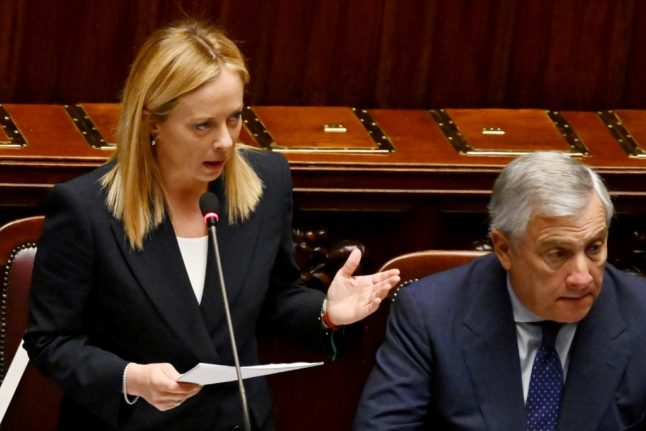 Does the new government really want to change the constitution?

Yes. Meloni stressed again in her speech that the government intends to bring in constitutional reform changing Italy’s political system from that of a parliamentary democracy to a semi-presidential French-style system.

This was a cornerstone of Meloni’s electoral campaign and has long been a preoccupation of the Italian right, who stress that the current system of government – designed to keep any one party from gaining too much power in a post-Mussolini Italy – leads to political instability and dysfunction.

READ ALSO: How could Italy’s new government change the constitution?

The coalition didn’t reach the crucial supermajority of two thirds of the seats in both houses of parliament that would have allowed it push through the reform, so would need to hand over the decision to voters in a referendum.

It’s not clear whether there’s much public interest in the idea, but Meloni made it clear that this is a priority for her government.

“We will not give up on reforming Italy if we are faced with prejudicial opposition,” Meloni told parliament, adding that her government is determined to “give Italy an institutional system in which whoever wins governs for five years.”

How ‘far right’ is this government really?

Giorgia Meloni’s new Italian government comprises members of her post-fascist Brothers of Italy party and its coalition allies, Matteo Salvini’s anti-immigration League and Silvio Berlusconi’s Forza Italia, which is viewed as the more moderate of the three right-wing parties.

While individual ministers’ and MPs political ideologies therefore vary across the right-wing spectrum, many powerful figures in the new government are noted for their hardline nationalist ideologies, ‘ultra-Catholic’ beliefs, or open admiration for Putin’s Russia or Mussolini’s Fascist regime.

How much these extreme viewpoints will influence government policy remains to be seen.

READ ALSO: Is Brothers of Italy a ‘far right’ party?

As for Giorgia Meloni, her premiership seems to have started with a shift towards the centre, noted Lorenzo Pregliasco, head of polling firm Youtrend, in an interview with SkyTG24 on Wednesday.

“It is almost a habit by now for prime ministers to move towards the centre, Necessarily, to embody the idea of a government for the whole nation,” he said, pointing to how former prime minister Giuseppe Conte started out with a programme that was “anything but centrist”, but represented “moderation” by the end of his time in office.

Unlike Conte, Meloni is head of her party, meaning “if she moves to the centre this shifts all the balances” and would have a moderating effect on her party and government.

Who are the ministers?

At 45 years old, Meloni is the youngest member of her government – and one of a minority of women.

Of the 26 ministers in Italy’s cabinet, only six are female. Three of those are ministers without portfolio.

As well as being deputy PM, Salvini is also minister for infrastructure. While he was reportedly hoping to return to his old job as interior minister, this position gives him control of Italy’s ports and is expected to allow him to pursue his agenda of blocking migrant rescue ships at sea.

Some of the more controversial names on the list include ‘ultra-Catholic’ anti-abortionist Brothers of Italy MP Eugenia Roccella as head of the renamed Ministry for Families, Birthrate and Equal Opportunities, and the position of Agriculture Minister for Meloni’s brother-in-law, Francesco Lollobrigida.

See more about the ministers in the new government here.

How long will this government last?

Given the propensity for Italian governments to collapse, there is already widespread speculation about whether Meloni’s administration will last long enough to enact any of its planned reforms.

Despite their differences, coalition allies Meloni and Salvini have insisted the government will stay the course. They’ve repeatedly said their parties will be in power together for the full five-year term – though this would be very unusual in Italy, where postwar governments have lasted 18 months on average.

One reader poll by Italian financial news website Money.it this week found 40 percent of respondents expect the new government will manage five years, while another 30 percent said they think it will last less than 12 months.

Deputy Prime Minister Salvini, whose far-right League party is a key member of Meloni’s coalition, is suing the journalist for calling him the “minister of the criminal underworld” in a social media post in 2018.

In November, Saviano went on trial in a case brought by Meloni for calling her a “bastard” in 2020 over her attitude towards vulnerable migrants.

Meloni’s far-right Brothers of Italy party was in opposition at the time, but won September elections on a promise to curb mass migration.

Saviano, known for his international mafia bestseller “Gomorrah”, regularly clashes with Italy’s far-right and says the trials are an attempt to intimidate him.

He faces up to three years in prison if convicted in either trial.

“I think it is the only case in Western democracies where the executive asks the judiciary to lay down the boundaries within which it is possible to criticise it,” Saviano said in a declaration in court on Wednesday.

He said he was “blatantly the victim of intimidation by lawsuit”, on trial “for making my opinion, my thoughts, public”.

Press freedom watchdogs and supporters of Saviano have called for the suits to be scrapped. Meloni refused in November, despite criticism that her position of power makes it an unfair trial.

Saviano has lived under police protection since revealing the secrets of the Naples mafia in 2006.

But when Salvini was appointed interior minister in a previous government in June 2018, he suggested he might scrap Saviano’s armed guard.

The writer reacted on Facebook, saying Salvini “can be defined ‘the minister of the criminal underworld’,” an expression he said was coined by anti-fascist politician Gaetano Salvemini to describe a political system which exploited voters in Italy’s poorer South.

He accused Salvini of having profited from votes in Calabria to get elected senator, while failing to denounce the region’s powerful ‘Ndrangheta mafia and focusing instead on seasonal migrants.

Salvini’s team are expected to reject any claim he is soft on the mafia.

Saviano’s lawyer said he will call as a witness the current interior minister Matteo Piantedosi, who at the time was in charge of evaluating the journalist’s police protection.

The next hearing was set for June 1st.

Watchdogs have warned of the widespread use in Italy of SLAPPS, lawsuits aimed at silencing journalists or whistleblowers.

Defamation through the media can be punished in Italy with prison sentences from six months to three years, but the country’s highest court has urged lawmakers to rewrite the law, saying jail time for such cases was unconstitutional.

Saviano is also being sued by Culture Minister Gennaro Sangiuliano in a civil defamation case brought in 2020, before Sangiuliano joined the cabinet.

A ruling in that case could come in the autumn. If he loses that case Saviano may have to pay up to 50,000 euros in compensation, his lawyer told AFP.

Italy ranked 58th in the 2022 world press freedom index published by Reporters Without Borders, one of the lowest positions in western Europe.