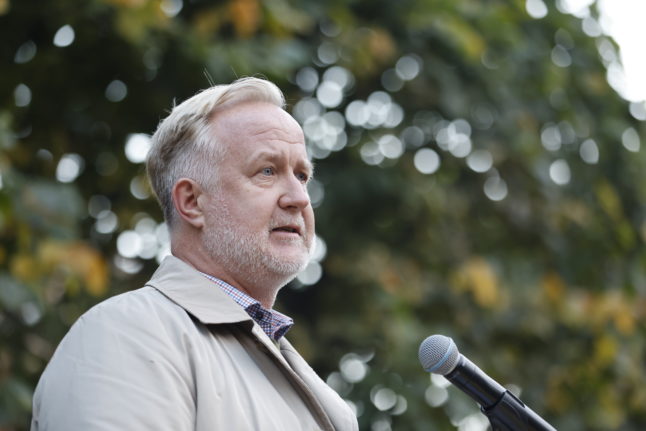 “The Swedish situation is not satisfactory – that’s the least you can say,” the leader of the group, French MEP Stéphane Séjourné said in a press briefing in Strasbourg.

Discussions are now ongoing in the Renew Europe group (RE) as to whether there is sufficient reason to expel the Liberals and their MEP Karin Karlsbro.

At a meeting in Brussels in his new role as Sweden’s Employment Minister, Liberal leader Johan Pehrson described it as “unthinkable” that his party colleague Karlsbro could be forced to leave the group, adding that his party “takes the criticism seriously”.

However, Pehrson stated that he has attempted to explain the situation to his liberal colleagues in Europe.

“I’m trying to explain what an exceptionally strong document we’ve produced, in the form of a governing document which shows meaningful liberal reforms in Sweden – but that means less migration. That’s also true,” he told TT newswire and public broadcaster Sveriges Radio in Brussels.

Despite defending Karlsbro and the Liberals’ place in the EU group, Pehrson also referenced the fact that his party is not the first in the EU’s liberal party group to work alongside parties like the Sweden Democrats.

“Other parties in our party group have previously worked alongside parties which aren’t exactly liberal,” Pehrson said.

“The Liberals have been solid members of RE as long as it has existed, but also of [European liberal party organisation] Alde for decades, and we will continue to do so,” he told reporters in Brussels.

Mahmut Tat, who was sentenced to six years and 10 months in jail for PKK membership in Turkey, fled to Sweden in 2015 but his asylum request was rejected.

Tat arrived in Istanbul on Friday night having been detained by Swedish police, the Anadolu news agency reported.

He was taken by Turkish police soon after arriving at Istanbul airport and referred to court on Saturday, the private NTV broadcaster reported.

Turkey has accused Finland and Sweden in particular of providing a safe haven for outlawed Kurdish groups it deems “terrorists”, and held back on ratifying their NATO bids despite an agreement in Madrid in June.

Finland and Sweden dropped decades of military non-alignment and sought to join NATO in May, after Russia invaded Ukraine.

The decision requires a consensus within the US-led defence alliance, but only Turkey and Hungary are yet to ratify their membership.

Foreign Minister Mevlut Cavusoglu held trilateral talks with his Swedish and Finnish counterparts on the margins of a NATO meeting in Bucharest this week.

“The statements (coming out of Sweden) are good, the determination is good but we need to see concrete steps,” Cavusoglu said.

Ankara has said it expects Stockholm to take action on issues including the extradition of criminals and freezing of terror assets.