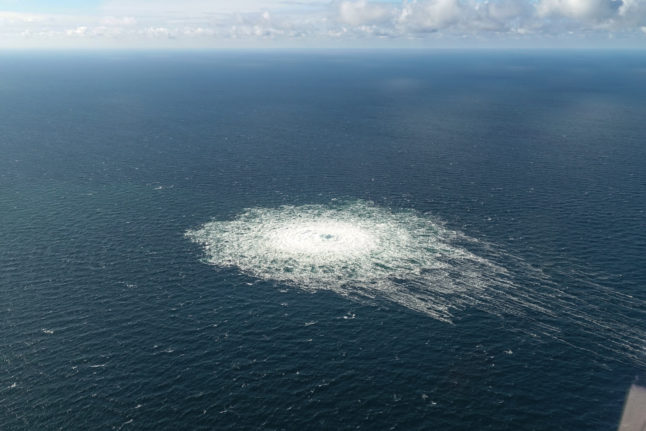 A spokesman for the federal prosecutor’s office said in an email to AFP that it was investigating “against persons unknown” on suspicion of “intentionally causing an explosive blast” and “sabotage” linked to the leaks.

READ ALSO: What the Nord Stream pipeline leaks mean for people in Germany

It said that its involvement in the case was justified by the fact that a “violent attack on the energy supply could impact the external and internal security” of the country.

The probe comes in addition to cases opened by German federal police and the federal bureau of investigations. German prosecutors said there was “sufficient evidence” that Nord Stream 1 and 2 were “intentionally damaged with at least two detonations”.

They said their probe was aimed primarily at “identifying the perpetrator or perpetrators as well as the possible motive”. Swedish authorities said on Thursday that an inspection of two of the leaks reinforced suspicions that they were acts of sabotage, with “detonations” that led to “extensive damage to the gas pipelines”.

The Nord Stream 1 and 2 pipelines, which connect Russia to Germany, have been at the centre of geopolitical tensions as Russia cut gas supplies to Europe in suspected retaliation against Western sanctions following Moscow’s invasion of Ukraine.

While the pipelines are not currently in operation, they both still contained gas before they fell victim to apparent sabotage.

Both Moscow and Washington have denied responsibility for the leaks, which were discovered in late September. Germany, Sweden and Denmark formed a joint investigation unit to probe the apparent “sabotage”.

“The analyses conducted found traces of explosives on several foreign objects” found at the sites of the blasts, prosecutor Mats Ljungqvist, who is leading the preliminary investigation, said in a statement.

Ljungqvist added that technical analyses were continuing in order to “draw more reliable conclusions regarding the incident.”

Sweden’s Prosecution Authority said that the “continued investigation will show if anyone can be formally suspected of a crime.”

The four underwater explosions at the Nord Stream gas pipelines carrying natural gas from Russia to Germany under the Baltic Sea in September this year were caused by a force corresponding to hundreds of kilograms of explosives, a Danish-Swedish report has previously concluded.

“The analyses conducted found traces of explosives on several foreign objects” at the sites of the blasts, prosecutor Mats Ljungqvist, who is leading the preliminary investigation, said in a statement on Friday.

Ljungqvist added technical analyses were continuing in order to “draw more reliable conclusions regarding the incident”.

Sweden’s prosecution authority said the “continued investigation will show if anyone can be formally suspected of a crime”.

The Swedish Security Service (SÄPO) — which is conducting the investigation under the prosecutors’ leadership — confirmed the findings in a separate statement but both authorities declined to comment further.

The closely watched investigation has also been supported by Sweden’s coast guard, the Swedish armed forces and the police.

At the end of October, Nord Stream sent a Russian-flagged civilian vessel to inspect the damage in the Swedish zone.

The same week the prosecution authority announced it was conducting a second probe of the damage to complement the first done in early October.

In early November, the operator said roughly 250 metres (820 feet) of the Nord Stream 1 pipeline had been destroyed and that craters with a depth of three to five metres had been found on the seabed.

Moscow has accused Western countries of being behind the explosions of the pipelines, but has not provided any firm proof.

In early November, the Kremlin accused Britain of “directing and coordinating” the explosions.

The accusation was rejected as “distractions which are part of the Russian playbook” by a spokesman for British Prime Minister Rishi Sunak. Ukraine and some Western countries have meanwhile pointed the finger at Russia.

In mid-October, Russia said it was ready to resume deliveries of gas through the parts of the pipeline not affected by the leaks, with President Vladimir Putin saying “the ball was in the EU’s court”.