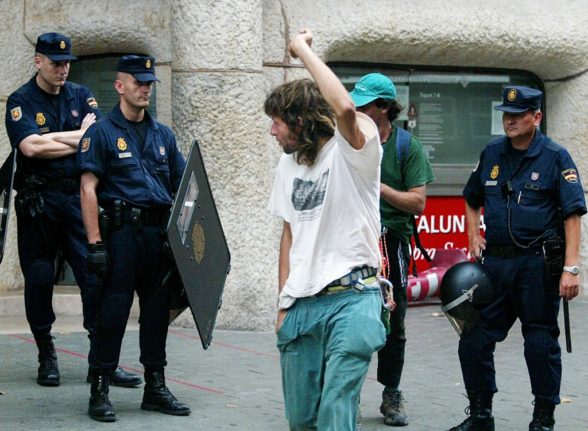 Okupas can be found across Spain but the regions that tend to have the most are Catalonia far ahead, followed by Madrid and Andalusia. AFP PHOTO/CESAR RANGEL (Photo by CESAR RANGEL / AFP)

Squatting has long been a controversial issue in Spain.

Some point to the more than 3 million empty properties across Spain and the cost-of-living crisis as reasons to be more understanding when people can’t pay the rent.

Yet Spain’s ‘okupa’ movement is much more than that, with organisations intent on exploiting legal loopholes, or individuals who own their own properties which they rent out to others whilst they occupy ones that don’t belong to them.

Unfortunately, Spain’s evictions drama, which largely stems from people who can no longer pay their mortgages, has become mixed up with the country’s squatting problem.

Critics say the Spanish law abandons property owners and that there are too many legal obstacles which hinder squatters’ speedy eviction.

In the ten years from 2001 to 2011, the number of empty homes in Spain increased by 336,943 (an increase of 10.8 percent) to stand at 3.4 million according to the latest data available from the INE’s Population and Housing Census.

But as the number of empty houses increases, so has illegal squatting.

Some studies point to a slight decrease in the first half of 2022, others to continuingly high figures. What’s clear is that squatting is an ongoing problem in Spain, with an average 49 reported cases a day.

Okupas can be found across Spain but the regions that tend to have the most are Catalonia far ahead, followed by Madrid, Andalusia, the Valencia region and the Canary Islands.

READ ALSO: Squatting in Spain: Which regions have the worst ‘okupa’ problems?

The occupation of someone else’s property does constitute a crime in Spain, as established in article 245 of Spain’s Penal Code: “Whoever occupies, without due authorisation, a property, dwelling or building belonging to someone else and which does not constitute their residence, or remains in the property against the will of the owner, will be punished with up to three to six months of prison”.

However, sentences in Spain under two years usually don’t result in actual prison time, which doesn’t act as a dissuasion for okupas.

Spanish law also differentiates between usurpación (misappropriation) from allanamiento de morada (breaking and entering), the determining factor for the judge being whether the property is inhabited or not in terms of taking action against the okupas.

Fortunately, second homes are still considered a morada (dwelling) in Spain, as long as they are furnished and have all the basic services such as water and electricity. Therefore, they receive the same protection as first homes.

And yet, the devil is in the details.

If the okupación is reported within 48 hours and it is the first home of the owner, police officers may evict the squatters without the need for a court order. However, if more than 48 hours have passed and it’s a second home, things get more complicated. 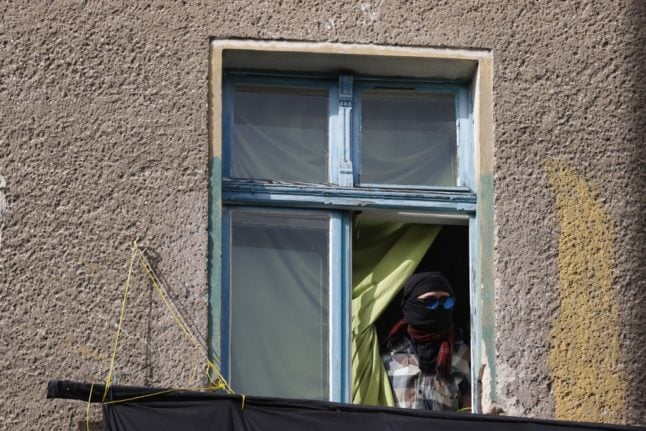 The first 48 hours of ‘okupación’ are crucial to determine whether a proprietor will need a court order to return to their property. (Photo by Odd ANDERSEN / AFP)

Squatters are often familiar with the law and use the principle of inviolability of the home to plead their case. By changing the locks they legally enforce this, as not even the owner can enter without a court order.

The squatters have the upper hand in this sense; if the true owners break in, the okupas can sue them, and if the proprietors don’t pay the bills, they’ll go on a defaulters’ list. They’ll use other tricks such as having goods ordered to the address to prove that it’s their morada (dwelling) and having minors at the property to strengthen their legal protection.

In the meantime, all the owners can technically do is open legal proceedings against the squatters by placing a complaint (civil or penal) and proving that the property is indeed theirs and the squatters aren’t unfairly treated tenants or similar.

If you hadn’t guessed already, having your home occupied by squatters in Spain can work out to be a legal nightmare that lasts months, dare we say longer.

The Local Spain has written in detail about how homeowners in Spain can prevent this from happening to them.

Experts say that Spanish property owners are among some of the worst protected in Europe.

According to Arantxa Goenaga, partner and lawyer at Círculo Legal Barcelona, “if we compare with the rest of the European Union, the situation in Spain is worse and much more unfavourable for the owner, not only because the judicial procedures are slower but also because greater protection measures are adopted for vulnerable citizens without any measure that favours the owners.”

Homeowners and legal experts alike have complained about the complicated legal structures surrounding squatting and evictions. Often, this means squatters are allowed to stay for months – even years – while the legal process is underway.

Fortunately for homeowners, the Spanish government is trying to do something about this.

On October 5th, the governing party PSOE received plaudits for making changes to the Code 544 of the Law of Criminal Procedure to speed up evictions of squatters within a maximum period of 48 hours.

However, the new speedy evictions relate only to “trespassing or usurpation of real estate” and not those pre-existing tenants who simply stop paying rent and refuse to leave the property.

This second method, of simply refusing to pay rent and staying, is the most common method of squatting in Spain, accounting for around 70 of all cases, according to the lobby group La Plataforma de Afectados Ocupación.

This means that though the government’s measure is a positive step for homeowners, it does little to tackle the majority of squatting cases in Spain. It may speed up some evictions, but will likely do little to speed up or resolve the lengthy ongoing legal battles many property owners find themselves in. 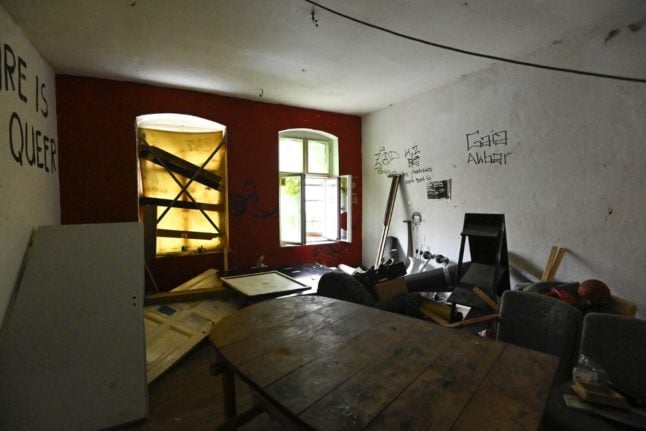 Squatters in Spain often use the principle of inviolability of the home to increase their legal protection. (Photo by Tobias SCHWARZ / AFP)

What should I do if squatters move into my home?

The first 48 hours are crucial if your home or second home is illegally occupied.

If you can prove that squatters moved into your property within this two-day period, you can take the matter to the police and they can evict the okupas without a warrant.

If 48 hours have elapsed and the squatters have changed the lock, you will require a warrant and that’s when the legal ordeal begins.

You will have to file a request for eviction (demanda civil de deshaucio) and the judge will set a time and a date for you and the squatters to appear in court. Crucially, many okupas refuse to identify themselves or attend proceedings, which effectively stalls the process.

If any of the occupants are minors or vulnerable people, the judge is more likely to side with the squatters.

If you’re thinking about relocating, Spain is a fantastic place to do it. Foreigners have been moving to Spain for decades, not only for its fantastic food and weather, along with a laid-back lifestyle, but housing is generally affordable – if you know where to look.

Though the rise in the Euribor has sent interest rates spiking, house prices in Spain are expected to flatten somewhat in 2023 and it could be a good year to find a bargain, depending on your financial situation.

Knowing what type of house you want and where in Spain you want to live is one thing, but knowing the cheapest, yet most in-demand parts of the country could really help you narrow down your search.

It’s based on data from the last quarter of 2022 and is the average price of housing in towns with more than 1,300 sale announcements and costs valued at more than €1,100 per square metre.

You can find the ten cheapest areas of Spain to buy property by average price below, but it’s worth noting that Idealista did these rankings by average price across the entire municipality, so there are likely individual towns and villages dotted around Spain where prices are significantly lower.

That said, this list gives you a good idea of the areas to look out for.

READ ALSO:  What will happen with property prices in Spain in 2023?

The 10 cheapest municipalities in Spain to buy property

Santa Pola (Alicante) – Santa Pola, in the Alicante province, is the cheapest most in-demand municipality to buy a house, according to Idealista’s rankings. The average price for a house in Santa Pola costs just €151,796, though this may come as a surprise given its prime location in a foreign hotspot on the sought-after Costa Blanca. The main town of Santa Pola itself is a small beachfront community with a population of around 35,000. It also has a large foreign population and is a short drive or bus away from both Alicante and Elche.

Ourense (Galicia) – Next on the list is Ourense in Galicia where the average price is €154,941. The municipality is home to several towns and villages, surrounding the main medium-sized town of Ourense itself in southern Galicia. The town has a population of around 105,000 and is a little over an hour’s drive from both Santiago de Compostela and the coastal city of Pontevedra.

Oviedo (Asturias) – Third on the list is the municipality of Oviedo where you’ll pay an average of €154,968 for a property. Another area in northern Spain, the main city Oviedo itself, which is the capital of Asturias and has a population of 220,000. It sits between Cantabrian mountains and the Bay of Biscay. It’s known for its picturesque medieval old town and impressive architecture.

Jerez de la Frontera (Cádiz) – Properties cost an average of €155,563 in the municipality of Jerez de la Frontera, or Jerez as it’s commonly referred to. It’s located in the Cádiz province of Andalusia and is a real piece of ‘traditional’ Spain. Jerez city is a decent-sized place with a little over 200,000 people and is known for horses, flamenco dancing and sherry, as well as the Alcázar de Jerez, an 11th-century fortress that harks back to Andalusia’s Moorish past.

READ ALSO: Is it better to buy or rent in Spain right now?

Torrevieja (Alicante) – Another municipality in Alicante and another incredibly popular with foreign homeowners. Properties here go for an average of €155,787. Torrevieja itself has a population of 82,000 and is another coastal town, but also has nature trails and salt plains nearby.

Murcia (Murcia) – Murcia is often overlooked, wedged between Alicante and Andalusia, but you could grab a bargain here with average prices of €157,119. Murcia capital is a bustling city of almost 450,000 people, and is strategically placed for trips to the Costa Blanca, Costa Calida, Costa del Sol, and Costa de Almeria.

Parla (Madrid) – The municipality of Parla lies just 20km south of Madrid and the town of the same name is home to 130,000 residents. It’s a great commuter area for those who work in Getafe or the capital. A house here costs an average of €160,652.

Salamanca (Castilla y León) – The municipality of Salamanca surrounds the capital of Salamanca in Castilla y León in northwestern Spain. Buying a property in this area costs an average of €162,909. The main city of Salamanca is known for its university, which is the oldest in Spain and dates back to 1218. Understandably, much of Salamanca’s roughly 150,000 residents are students, which gives the town a lively atmosphere.

Dos Hermanas (Sevilla) – The second most populous municipality in the province of Seville, properties cost an average of €163.274 here. The Andalusian town is just 15km south of Seville, making it great for commuters or those who want plenty of culture nearby.