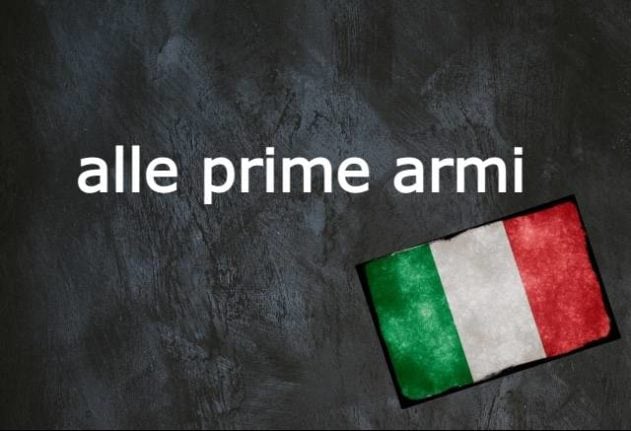 At the risk of being chastised for resorting to well-worn clichés, if each Italian teenager had a cent for every time they were scorned on account of them being ‘alle prime armi’, Italy’s youth unemployment would likely be less of a cause for concern right now.

But, what does ‘alle prime armi’ mean and why are youngsters the most likely (and most unfortunate) targets of this peculiar expression?

Well, as some of you might have already guessed from the presence of the word ‘armi’ (weapons), the expression comes from the military world and refers, in its original meaning, to any young recruit being handed their weapons at the start of their training in the forces.

As such, the idiom’s literal rendition into English would be something along the lines of ‘[someone] holding their weapons for the first time’.

But, nowadays, the expression is hardly ever used in its first intended meaning as its scope has extended to encompass practically anyone who’s recently started a new job or craft and has little to none experience in the relevant field.

So, in its more recent interpretation, the idiom would actually correspond to English adjectives such as ‘fledgling’, ‘inexperienced’ or ‘green’, or expressions like ‘wet behind the ears’.

Alternatively, the Italian expression could also be replaced by nouns such as ‘beginner’, ‘rookie’ or ‘novice’.

Here are some examples of how Italians use ‘alle prime armi’:

What do you think of my work today?
I think it’s the work of a novice.

As you can see from the above examples, the expression is often used in a rather patronising, slightly demoralising way, which, take it from an Italian born and bred, is sadly the default attitude of most Italian people over the age of 50 regardless of whether they are family members, long-time friends or just your superiors at work.

If it’s any comfort, you should know that this is just one of those hard and fast aspects of Italian culture that have been there from time immemorial and most people using the expression actually mean well.

And, if you’re not too happy about being described as a person ‘alle prime armi’, you’ll at least find no shortage of witty comebacks in the Italian language. 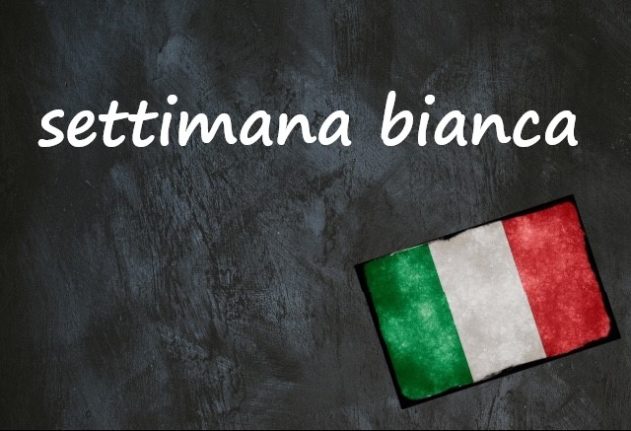 As far as winter traditions go, there’s only one thing more quintessentially Italian than a family feud over which is the best Christmas dessert between pandoro and panettone. That one thing is the ‘settimana bianca’ (pronunciation available here).

You might have already heard the expression on a couple of occasions, but if not, you’re very likely to hear it soon from Italian friends, relatives or colleagues as we enter the holiday season

There is a set of unwritten rules governing a respectable settimana bianca, but first, what does the expression actually mean?

The literal translation into English would be ‘white week’, and the phrase is used by native speakers to describe a period of around seven days (but sometimes more) spent in any mountain destination, whether that’s in Italy or abroad.

As you might have guessed, ‘bianca’ refers to the colour of the location’s landscape, which would be white due to the presence of snow.

Where are you thinking of going for your ski holiday this year?

Hmm, I haven’t really thought about it yet. Maybe Cortina?

Are you out of your mind? With those prices…

That said, you might wonder what’s so special about a winter break up in the mountains.

Regardless of whether it’s a family vacation or a trip with friends, the settimana bianca has a precise set of features that all Italians seem to be aware of from a very young age, almost as though information on how to execute it came embedded in their own genetic setup.

Firstly, the settimana bianca is a very important social event and the smooth unfolding of the holiday is seen as vitally important.

As such, the organisers spend the preceding weeks and months working on an infallible day-by-day plan, which is generally scrapped the moment they reach their destination.

Italian holidaymakers then spend most of their days engaging in a variety of winter sports, from skiing to ice skating, with tall tales of athletic prowess generally followed by tragic tumbles and other various health and safety mishaps.

What was the toll of your last ski holiday?

Oh, not so bad then. I expected worse.

Finally, no settimana bianca is truly complete without at least one of the members of the group severely underestimating the rigid winter temperatures and ultimately falling ill, thus being begrudgingly looked after by a carousel of friends or relatives for the rest of the vacation.