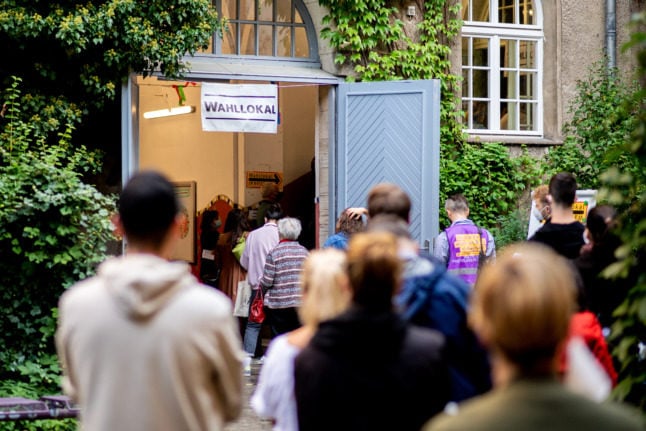 Numerous voters queue up outside of a Berlin Prenzlauer Berg polling station to cast their vote in the 2021 election. Photo: picture alliance/dpa | Hauke-Christian Dittrich

If there’s one place in Germany where the myth of German efficiency goes to die, it is Berlin.

Whether it’s the BER airport – eight years delayed and frequently plagued by security staff shortages and long lines – or whether it’s the two-month wait to get a Bürgeramt appointment to register your apartment or get your driver’s license, the capital is infamous for its bureaucratic dysfunctionality.

Run the same day as the world-famous Berlin Marathon, many inner-city polling stations along the Berlin route ran out of ballot papers because delivery trucks couldn’t get them there fast enough.

The lines grew, some people left them, and many voting stations stayed open after the 18:00 deadline, leading the city’s constitutional court to declare last week that the snafus likely affected the final result – meaning Berliners would probably have to vote again.

The federal traffic light coalition though, is already weighing in and preparing for a revote in some constituencies.

Election day in September 2021 saw Berliners with German passports cast votes for their federal representatives in the Bundestag, their state parliamentarians, and a referendum on whether to expropriate large corporate landlords.

Meanwhile, Berliners from other EU countries were also able to join their German neighbours in voting for their local district – or Bezirk – councillors.

At the very least, all of these contests would need to be run again in the six districts affected by the logistical issues.

The Berlin constitutional court, which has only published a preliminary opinion so far, didn’t indicate whether these six districts alone would vote again – or whether the entire city was headed back to the polls.

Could the entire city have to vote again? How many districts were affected?

The court has three months to issue its full ruling, which will tell us whether all of Berlin is voting again or whether it’s just a few districts.

There are different estimates too for how many voting stations may have had problems.

Building Senator Andreas Geisel reckons 14 voting stations had results that were so close that even a slight change in how they vote could have a big impact on the overall result.

Berlin’s former returning officer found glitches in 207 polling stations out of the city’s 2,300.

Traffic light politicians though, who sit in the Bundestag’s Elections Review Committee, think at least 300 out of Berlin’s 2,300 voting stations will have to vote for their Bundestag representative again.

Social Democrat MP Johannes Fechner has moved to repeat the Bundestag contests only in these 300 or so stations.

The committee is likely to agree with him, but this would affect only the federal contests, leaving the state of Berlin to decide whether to rerun Berlin state elections, votes for the local council, and the housing referendum.

Could it change the final result?

Any effect of a swing in votes on who sits in the Bundestag would be quite small. Only a couple of seats could be at risk of changing hands.

While some parts of Berlin could theoretically wake up with a new parliamentarian representing them locally, not enough seats are up for grabs to change the federal traffic light coalition.

The city, council, and referendum votes are another matter.

The referendum originally passed with 56 percent of the vote – a clear victory, but not a landslide. 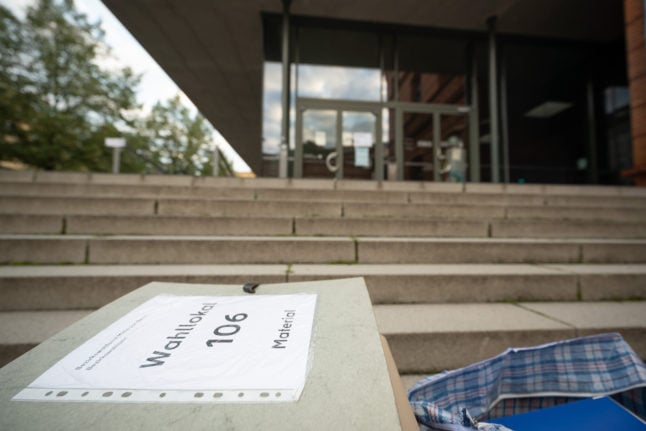 READ ALSO: Berlin’s super election day: What does it mean for the city’s housing shortage?

The city vote in particular was very close in 2021, with Mayor Franziska Giffey’s Social Democrats finishing only 2.5 percent ahead of the second-place Greens – and less than three percent ahead of Berlin’s conservative Christian Democrats (CDU).

With Giffey having lost ground in recent polls, the SPD could lose the Berlin Mayor’s Office in a revote – a post it has held for most of the post-war era—even if only a few districts vote again.

When could this happen?

Berlin’s constitutional court has until the end of the year to issue a full ruling, which will tell us what the scale of the revote will be.

A new contests would be, by some expert estimates, likely in April 2023. 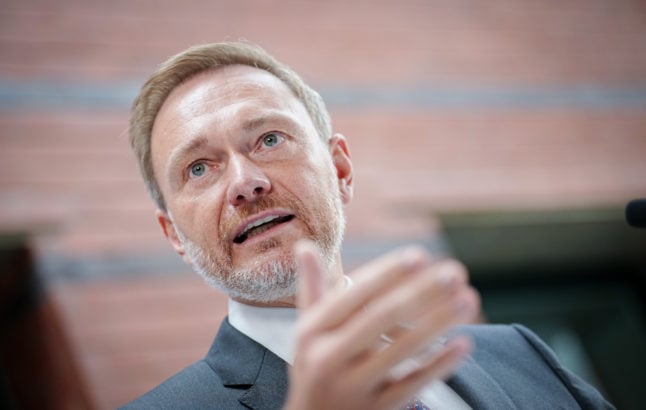 “Next year (…) we will see a deficit of 3.25 percent,” Finance Minister Christian Lindner said, warning that the figure could even reach 4.5 percent depending on “the scale of spending” to help counter soaring gas and electricity prices.

The previous forecast for 2023 was for a deficit of just two percent of GDP.

A “normalisation of public finances” should be achieved by 2024, according to the finance ministry.

“We have made enormous efforts during the crisis to relieve the burden on people and avoid structural disruptions,” Lindner said.

The German economy has been particularly hard hit by the fallout from the war in Ukraine, with spiralling energy costs squeezing the country’s flagship industrial sector and dampening consumer purchasing power.

The government has unveiled a €200 billion ($210 billion) support package to mitigate the impact of the energy crisis, including a cap on gas prices for businesses and households.

The economy is nevertheless expected to contract by 0.4 percent in 2023.

READ ALSO: Germany’s recession to be ‘milder than expected’ in 2023

The government also said in November it expects new net borrowing next year to climb to 45.6 billion euros, more than double the 17.2 billion euros initially estimated.

Germany is however planning to return to the constitutionally enshrined “debt brake” in 2023, which limits annual new borrowing to 0.35 percent of gross domestic product.

The government had lifted the debt brake at the start of the coronavirus pandemic in 2020 to cushion the blow from shutdowns.

But reinstating the debt brake has been a priority for Lindner, a fiscal hawk from the pro-business FDP party who came into office last December.

In order to meet this commitment, the government has announced that “special funds,” such as the €200 billion energy package will be considered separate from the regular federal budget.