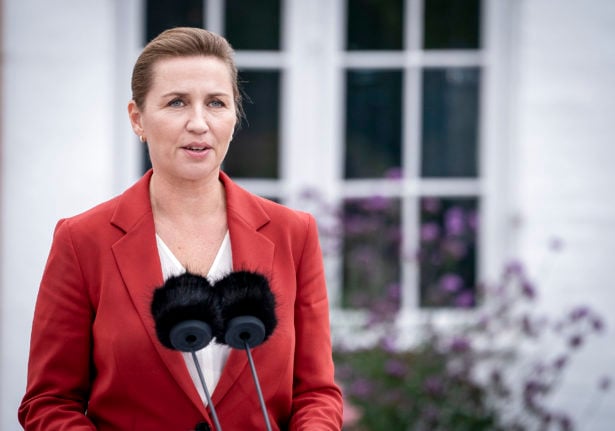 Speaking from the Prime Minister’s residence at Marienborg north of Copenhagen, Frederiksen confirmed widely-held expectations that an election will take place this autumn.

“Denmark is a fantastic country. But times are hard,” she said as she opened the announcement in reference to the energy crisis and war in Ukraine among other challenges, hinting that the government does not see the timing of the election as ideal.

She went on to outline the government’s platform policies going into the election, before confirming the date the ballot will be held, November 1st.

In the announcement, Frederiksen said that she was prepared to form a cross-aisle government, in a move that would break with Denmark’s customary ‘bloc politics’ system which sees left- and right-wing parties in opposing factions.

“The time has come to try a new form of government in Denmark. We are ready for both compromise and collaboration,” she said.

“We want a broad government with parties on both sides of the political centre,” she said at the briefing, at which press questions were not taken.

Expectations that an election was imminent were reinforced on Wednesday morning when election-related ads were placed by Frederiksen’s Social Democratic party in Danish newspapers.

The ads did not directly confirm a general election, but did explicitly mention one, saying “Reality is about working together. The election is about who can make it happen”.

Frederiksen also gave a clear suggestion that a general election will be called imminently following the traditional opening of parliament on Tuesday.

“I daresay the election will soon start getting closer,” she told reporters.

Legally, the government could have waited until June 4th, 2023 to hold a general election, which is required once every four years under the Danish Constitution.

Recent polls have suggested the election could be a knife-edge contest, with little to choose between the ‘red bloc’ of left-wing allied parties, led by Frederiken’s Social Democrats, and the opposing ‘blue bloc’ of right-wing parties.

An opinion poll conducted by Voxmeter on behalf of news wire Ritzau, published on Monday, put the red bloc on 86 of Denmark’s 179 seats in parliament, one ahead of the blue bloc, on 85 seats.

Of the remaining eight seats four were projected to go to the newly-formed Moderate party, headed by former prime minister Lars Løkke Rasmussen.

Rasmussen has not declared his party for either bloc, saying he would prefer a grand coalition across the centre. He led a ‘blue bloc’ government as leader of his previous party, the Liberals.

The final four seats are allocated to representatives from parties in Greenland and the Faroe Islands.

Three economists writing in a column in political media Altinget said there was “nothing necessary” about the plan to scrap Great prayer Day.

“Is it better, then, to cancel the government’s planned tax cuts, to cut public spending or to use the opposition’s alternative proposal?”, write the three economists: Ulrik Beck, senior economist with thinktank Kraka; and Michael Svarer and Hans Jørgen Whitta-Jacobsen, professors in economics at Aarhus and Aalborg universities respectively and both former members of the Danish Economic Councils.

The three economists go on to write that the answer to the question comes down to preferences and priorities.

They state that an opposition plan to raise an annual three billion kroner, the amount the government says the Finance Ministry will raise by scrapping Great Prayer Day, is “a fraction better”.

The three governing parties – the Social Democrats, Liberals (Venstre) and Moderates – want to abolish springtime public holiday Great Prayer Day in a move they say will enable increased defence spending to meet Nato targets by 2030, three years ahead of the current schedule. A bill was tabled by the government earlier in January.

The policy has met with criticism from trade unions, the church and opposition parties, while the military itself has also distanced itself from the plan.

The three economists write that the opposition proposal could hold back the welfare system in future, however. Additionally, a reduction in business support could harm companies.

Regarding the economic effect of scrapping Great Prayer Day, they state that although this has a potential monetary benefit, it is uncertain.

That is because people working in Denmark could choose to adjust their working hours by taking less overtime or “hours of interest” (interessetimer), they state.

In addition, collective bargaining agreements between trade unions and employers could eventually provide for an extra day off in response to emerging demand for this.

That would negate the effect of scrapping the holiday, the experts said.

READ ALSO: What is a Danish collective bargaining agreement?