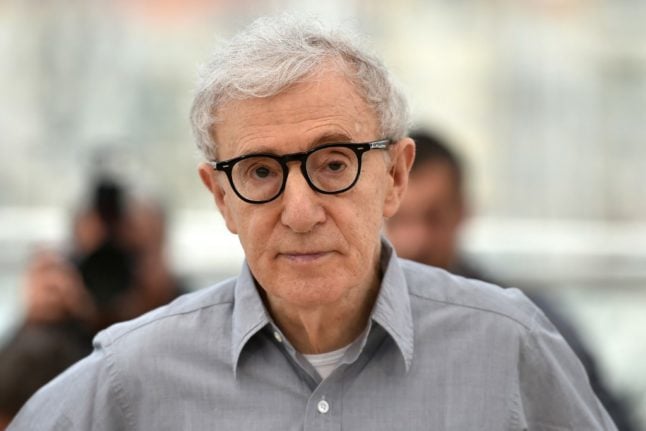 “Wasp 22” is “a black comedy in the spirit of ‘Match Point'”, a statement from Allen said.

The film is his 50th, and features Valerie Lemercier, star of last year’s “Aline”, a homage to Celine Dion.

Allen has seen Hollywood largely turn its back on him following a renewed accusation by his adopted daughter Dylan Farrow that he sexually assaulted her when she was a girl.

The director has always vehemently denied the accusations and accused his ex-partner Mia Farrow of orchestrating the campaign against him in the 1990s.

Two police investigations have found no evidence of an assault.

But Dylan Farrow reignited the debate during the MeToo movement, leading to Allen being dropped from a contract with Amazon.

Even his usually supportive European fans struggled to muster much enthusiasm for his last film “Rifkin’s Festival”, shot in Spain, which saw minimal box office returns.

For the past seven years, Lost in Frenchlation, a company that regularly screens French films with English subtitles, has given anglophones living in Paris – and more recently across France – the opportunity to enjoy French cinematic culture.

Lost in Frenchlation has also expanded out beyond Paris, with screenings in Charente and Normandy this month.

Here are the screenings across France that you will want to take note of:

Trois Nuits par Semaine – In this film, the main character, 29-year-old Baptiste meets a young drag queen, Cookie Kunty, and becomes mesmerised, even though he is already in a relationship. The film shows Baptise becoming immersed in Cookie’s world, and eventually the start of their relationship.

Cineuropa described the film as “conveying to perfection the vibrancy of this incredibly intense yet wistfully painful world” and that the complex film is likely “to divide audiences.”

The screening will take place on Friday, December 2nd at 8pm, with pre-drinks beginning at 7pm. Following the film, moviegoers are encouraged to stick around for a Q&A with the director.

It will take place at L’Entrepôt Cinema (7 Rue Francis de Pressensé) in Paris’ 14th arrondisement. Tickets are available online for €7 for those eligible for reductions, and €8.50 for all others.

Pétaouchnock – Set in the Pyrenees mountains, this film is about two friends seeking to pull themselves up from rock bottom. While trekking on horseback, the duo enjoy an unforgettable experience. Described by Le Parisien as having a “well-seasoned cast with a good dose of comedy.”

The evening will also celebrate Lost in Frenchlation’s seventh anniversary, with giveaways and stand up comedy. Join the group at 7pm for drinks, and enjoy English-language comedy from Sarah Donnelly and Luke Thompson at 7:30 before the show goes on at 8pm.

Taking place at the Club de l’Étoile in Paris’ 8th arrondisement (14 Rue Troyon), on Friday, December 9th, you can find tickets HERE. Reduced tickets will be available at €13, and regular tickets are available for €15.

Les Miens – a film by the director Roschdy Zem, Les Miens is a personal portrait of a family resembling the directors’ own. The film portrays a relationship between brothers – Moussa known for being kind – and Ryad – a TV presenter known for being egotistical. However, when Moussa suffers from serious brain trauma he becomes almost unrecongisable, and his family relationships are forever altered.

The screening will take place on December 12th at 8:30pm, with pre-drinks starting at 7pm. Moviegoers are welcome to stay after the screening for a Q&A with one of the film’s actors.

The show will take place at Cinéma du Panthéon, in Paris’ 5th arrondisement (13 rue Victor Cousin). You can get reduced-price tickets for €6.50 and regular priced tickets for €8.50. For this film, tickets will only be available at the door, but you can make a pre-reservation HERE.

Simone, le voyage du siècle –  a biopic about one of France’s most prominent women, Simone Veil, this film will take audiences through the renowned feminist and holocaust survivor’s early childhood, as well as her most pivotal political battles. Vogue has called it one of “the most anticipated films of the year.”

The Women of Paris walking tour will also be organising an event before the start of the screening, at 5pm. You can reserve tickets for €15 at this website.

As for the screening itself, it will take place on December 16th at 8pm. All are welcome to join in pre-drinks at 7pm.

The film will be shown at the Luminor Hotel de Ville cinema, located at 20 Rue du Temple in Paris’ 4th arrondisement.

You can find reduced price tickets (€7) and regular tickets (€11) HERE.

Les Engagés – Running a little over an hour and a half, this film shares the story of David, a man who ends up helping a young migrant who is being pursued by the police. Based on a true story, the film takes place in Briançon, a town in the Alps near France’s border with Italy, and tells the tale of how David commits himself to helping the young migrant, at all costs.

This screening will also be in partnership with the association “Serve the City Paris.” The only English-speaking NGO in Paris, Serve the City Paris has grown from its start in 2012 as a small circle to become a mobile organisation with over 700 volunteers.

The organisation will be conducting a Christmas fundraiser at the screening, where they will accept money, in addition to physical donations (with priority placed on sleeping bags and tents large enough for for two to four people) for those in need. You can learn more HERE.

Taking place on December 22nd, moviegoers are welcome to enjoy pre-drinks at 7pm before the 8pm screening at L’Arlequin in Paris’ 6th arrondisement (76 Rue de Rennes)

Those looking to enjoy a French film with English subtitles in Charente are in luck this month. The theatre is located in Marthon, about half an hour from Angouleme by car).

Couleurs de l’incendie – An adaptation of the 1927 saga, the film tells the story of Madeleine, a young heiress who must take over a financial empire after the death of her father, Marcel Péricourt.

You can find the listing for the film on the theatre’s Facebook Page. It will be screened December 10th at 5:30pm. If you need to contact the theatre for any reason, you can reach them at [email protected]

English-speaking fans of French cinema in Normandy can rejoice, as Lost in Frenchlation has also expanded to Caen. Here is what is in store for December;

Saint Omer – In this film by Alice Diop, a young novelist has her convictions called into question as she attends the trial of  Laurence Coly, a woman accused of killing her 15-month-old daughter, who drowned at a beach in northern France. As the trial rolls forward, the novelist is struck by the words of the accused and the witness’ testimonies.

The screening will take place in partnership with the Café des images, which is dedicated to giving the international community in Normandy an opportunity to experience France’s cinema culture.

Taking place on Wednesday, December 14th, moviegoers are invited to join for a pre-screening get-together at Café Polyglotte at 7pm. The screening will begin at 9pm.

The theatre itself is located at 4 square du théâtre, 14200 Hérouville-Saint-Clair