The sci-fi shockmeister, whose films include “The Fly”, “Dead Ringers” and “Crash”, received the honorary Donostia award at a gala in the northern Spanish city.

Earlier on Wednesday, the 79-year-old — whose latest film “Crimes of the Future” is a dystopian tale about a future where people undergo surgical alterations for the sake of art and sexual pleasure – said his work was not about seeking to push spectators to the limits but to push himself.

“It’s like I go on a creative journey exploring myself, my relationship with the world. I invent things and see how it feels… do they reveal some truth, something interesting, something entertaining,” he told reporters at the festival.

“And then I say to the audience: this is something I imagined, see what you think. So I’m not really trying to push the audience, I’m really pushing myself.”

When the film, starring Kristen Stewart, Lea Seydoux and Viggo Mortensen, premiered at Cannes in May, it divided the audience, sending many queasy viewers running for the exits but also winning a seven-minute standing ovation.

It will be screened later on Wednesday in San Sebastián.

‘The attraction of the forbidden’

“The appeal of art is to the unconscious, to the parts of ourselves that are still primitive and destructive, so in that way, we as artists are exploring those things that are hidden, that are forbidden, that are not to be acted upon in society, but still need to be understood, and to be expressed,” Cronenberg said.

“The attraction of cinema has always been what is forbidden, whether it’s as simple as sex in a time of repression, when sex was not to be shown on the screen, to other more obscure kinds of impulses like the ones that you might see in ‘Crimes of the Future’,” he said.

Winning the Donostia award was an encouragement to keep making films, he said.

“I used to think if you got an award for your whole career, they were basically saying enough, stop making films but I now realise it’s really to say: keep making films,” he said.

“So I hope to commit more crimes in the future by making more films.”

He said his next project was a film called “The Shrouds” starring Seydoux and Vincent Cassel which would begin shooting in Toronto in spring.

“It’s a very personal project for me. People who know me will know what parts of it are autobiographical,” he said.

Earlier this week, French actress Juliette Binoche was also honoured with a Donostia award for her acting career.

Major shops are closed, kids stay home from school and many businesses are shut too, so what do Spaniards do on All Saints’ Day?

A day at the cemeteries

The most traditional activity to do on All Saints’ Day is to go to the local cemetery. Spanish families usually go together to the cemeteries where their loved ones are buried, clean their gravestones and leave fresh flowers. Some cemeteries may even have events on such as live music or dance performances.

It’s also a day for spending time with family and perhaps meeting at someone’s house for a meal.

Panellets are traditional sweets from Catalonia eaten around this time of year. They are typically small balls made from marzipan and studded with pine nuts. You can, however, get many different flavours and many different types of decorations such as chocolate or even coffee ones, although most of them are still made with almond flour.

Saint’s bones as they are called in English are another typical treat found all over Spain at this time of year. Also made from marzipan, they’re long finger-like rolls filled with a sweet egg-yolk custard, created to look like bones. Today you can find many different flavours such as chocolate, coconut, praline or even yoghurt. 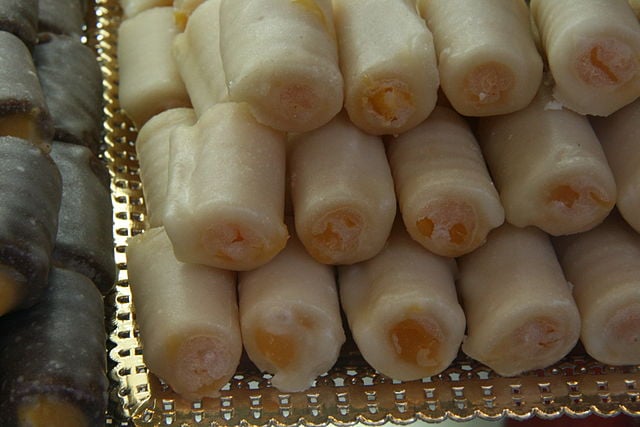 Wind fritters are small deep-fried fritters or doughnuts, which are again found in many regions across Spain during this time of year. They’re made from a batter of flour, sugar, eggs and milk and then deep-fried in hot oil before being filled with different creamy centres.

The most typical is vanilla cream, but you can also find many different types. Another favourite is those filled with cabello de ángel or angel hair, which is essentially candied spaghetti squash.

Legend says that when you eat a buñuelo, a soul is released from purgatory, which is why eating them has become a popular custom on All Saints’ Day.

Experts vary in their opinion as to the origins of these fritters. Some say they date back to the Moors, while others claim that one of the first references to them went as far back as Roman times.

La Castañada (Castanyada in Catalan) is a tradition held across Catalonia, the Balearic Islands and Aragón and coincides with All Saints’ Day and Halloween, even though it’s a separate festival. During the days leading up to these and the days itself, you’ll find chestnut sellers on street corners, roasting shiny brown chestnuts and big pumpkin-coloured sweet potatoes.

Children also go to school around the time, dressed as chestnut sellers.

This is the time of year for roast chestnuts in Spain. Photo: Angel Abril Ruiz / WikiCommons

Many regions in Spain have their own versions of the Castañada, such as Gaztañerre Eguna in the Basque Country and Navarra, which is known as the ‘día de las castañas asadas‘ or day of the roast chestnuts. It is typically celebrated on November 2nd and All Saints’ Night when families gather to honour their deceased loved ones by eating chestnuts, snails in sauce and motokil, similar to polenta made from cornmeal.