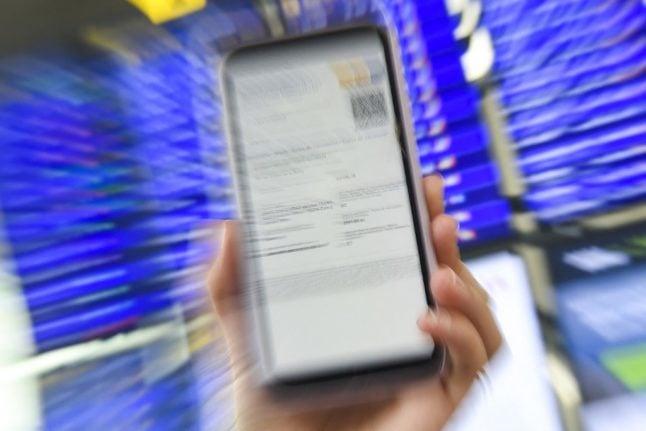 The EU doesn't have a certificate equivalence agreement with the United States, Canada, Mexico, Argentina, South Africa or Australia for example, so this announcement will make travel to Spain for nationals from these countries and many others that bit easier. (Photo by Pau BARRENA / AFP)

From Tuesday September 20th 2021, Spain no longer requires any international passengers arriving by air or sea in the country to complete and show a Covid health control form.

The SpTH form, which was first introduced in July 2022, had to be filled in online before travel to Spain and included the passenger’s Covid vaccination/testing/recovery status, their contact details and other information.

Upon arriving at a Spanish airport or sea port, passengers would have to show the document, which included a QR code, in order to enter Spain.

The Spanish government’s decision to scrap the SpTH form, which was announced in Monday’s State Bulletin (BOE), “aims to favour the normalisation of international mobility” and comes as a result of this document “no longer being considered necessary” as a means of controlling Covid-19 infections.

In April 2022, the Spanish government decided that travellers with an EU Digital Covid Certificate and those with third-country certificates approved by the EU (currently 48 countries) no longer needed to fill in Spain’s health control form.

The latest announcement means that all international travellers, regardless of which non-EU country they’re from, don’t have to fill in the form before travelling to Spain or show it upon arrival.

The EU doesn’t have a certificate equivalence agreement with the United States, Canada, Mexico, Argentina, South Africa or Australia for example, so this announcement will make travel to Spain for nationals from these countries and many others that bit easier.

On the other hand, the United Kingdom does have an agreement with the EU regarding Covid certificate recognition, so nothing changes for UK nationals visiting Spain.

The Spain Travel Health website and app, on which the health control form could be completed and which also included relevant travel information, “will no longer be operational” as of Tuesday 20th either.

Spain eased many of its domestic and travel restrictions in the lead-up to the 2022 summer period as it attempted to recoup the millions of tourists it lost during the pandemic.

However, Pedro Sánchez’s government recently extended until November 15th the requirement that states that travellers from non-EU countries must have a Covid-19 vaccination, test or recovery certificate to enter Spain.

This, together with the ongoing requirement to wear a mask on planes, ferries and other means of transport which are Spain-bound, remain the two outstanding Covid travel restrictions which are still in place in Spain.

Spain’s Budget Minister María Jesús Montero made the announcement on Tuesday October 4th during the presentation of Spain’s General State Budgets for 2023.

The free train travel offer came into force on September 1st and was originally due to end on December 31st 2022, but Montero has now confirmed it will be extended until at least December 2023 when the measure’s economic and environmental impact will be evaluated.

The offer is available on trains operated by the state-owned train network Renfe, including Cercanías, Rodalies (in Catalonia), and Media Distancia (local and medium-distance journeys).

Crucially, it’s only offered on special multi-journey tickets, not on single journeys or high-speed AVE trains.

GUIDE: How to get free train tickets in Spain

In order to obtain the free travel offer, passengers must pay a €10 deposit on Cercanías or Rodalies and a €20 deposit on Media Distancia trains. The deposit will be returned at the end of the year if at least 16 trips have been made during the initial four months.

Now that the offer has been extended, however, it is unclear exactly how many trips travellers will have to make to get their deposits back going forward into 2023.

Since the start of the free ticket plan, trips on Media Distancia trains grew by 40 percent since September 2022 and on Cercanías trains by 24 percent.

So far, 1.5 million free multi-journey tickets have already been requested and the goal is to reach 2 million during the rest of the year.

In order to finance the original measure, the government confirmed that €221 million would be allocated to regional governments and transport authorities across the country. More may now be needed in order to extend it.