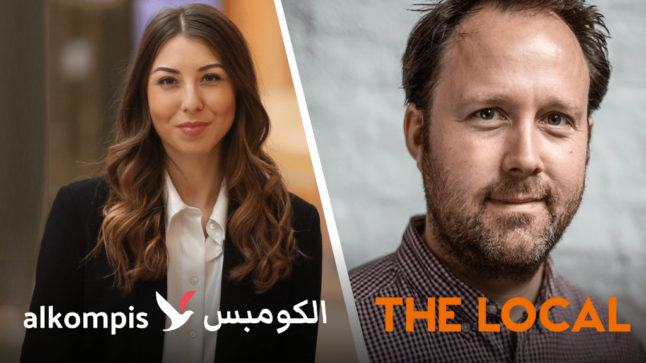 You can read the Swedish text in Aftonbladet here, while Arabic readers can find Alkompis’ version of the text here.

For the two million of us born abroad, this election has felt like being invited to someone’s house only for them to forget you are there and then start arguing over your terrible manners and how to get rid of you.

When The Local and Alkompis surveyed our readers about the election campaign, many were appalled by the xenophobic rhetoric, which they complained was now coming from both left and right.

All the parties agree that Sweden is segregated and that this must be changed, but the debate has almost exclusively been about criminality. Party leaders have been photographed with police visiting areas where immigrants live, talking to local politicians and social workers, but very rarely spending much time with the people who actually live there. There has been a lot of talk about immigrants, but not so much conversation with immigrants.

We hear about people who burn cars or carry out gang shootings, those who have not learned Swedish and who live on benefits.
We do not hear so much about people who contribute everyday to Swedish society. Those who drive taxis, write code, wash sheets in hospitals, teach in universities, or change the nappies on your 93-year-old grandmother.

Have we already forgotten about the foreigners who were in the front line during the very worst periods of the Coronavirus pandemic? Those who worked in healthcare and took care of our sick, who drove buses full of snotty, coughing and potentially infectious people. Those who died. Health statistics show that mortality from Covid-19 was disproportionately high among those born in Turkey, Syria, Somalia, Iraq, Iran, Greece and Chile.

From the Walloons who started the mining and iron industry to the British merchants and industrialists who founded companies in the 19th century, immigrants built Sweden’s economy. Since the Second World War, huge swathes of Swedish industry were developed with the labour of people from Italy and the former Yugoslavia, and many public services today are reliant on the skills of more recent immigrants from all parts of the world.

But it is getting harder and harder to come here, with long waits to get a work permit, and renewals still frequently refused due to small mistakes by employers. These issues are making life hard for individuals, but also for many Swedish employers who find it hard to recruit the staff they need.

This issue is almost entirely absent from the campaign. Instead, parties on both sides want to make coming to Sweden more difficult still, competing over who can have the higher salary threshold for work permits, and with the Social Democrats wanting to bring back the system where unions and bureaucrats get to decide what professions are needed.

Other policy proposals focus on criminality. The Moderates will bring in stop-and-search zones in ‘specially vulnerable areas’. They want to deport foreigners who are suspected of involvement in organised crime, whether they are found guilty by a court or not. The Sweden Democrats want whole families to be deported just because one family members commits a crime, and to bring in ‘humiliating’ community service punishments for nine year-olds.

The Liberals are proposing language tests for two year olds, while the Christian Democrats want to stress problems based on non-Swedish values.
Proposals like this threaten to make immigrants second-class citizens under the law. When the Social Democrats campaign on “turning over every stone to break segregating and stop gangs”, it’s the first time they’ve connected segregation, immigration and crime.

It stings a little to make the connection between immigration and crime so black and white.

Segregated areas have higher poverty, worse schools, worse healthcare, worse housing and, yes, more foreign-born people. Criminality is a result of segregation, it is not caused by foreign born people themselves.

The World Values Survey shows that Sweden, culturally, is exceptional. It is out there on its own when it comes to the level of individuality and secularism. But Swedes seem to forget that and just expect people to adapt as soon as they arrive. Magdalena Andersson talks every day about “turning over every stone” to fight segregation, but no one on any side ever suggests that Swedes, themselves, bear any responsibility for the problems.

Asking Swedish nationals to take the time and effort to become friends with their non-Swedish neighbours doesn’t seem to be a “stone” anyone is willing to consider turning over. It might take a long time before you invite your new colleague from a foreign country to your Midsummer celebrations, but you could at least get to know them.

Some parties – the Left Party, the Green Party, the Centre Party – at least recognise the contribution immigrants make, but even they tend to tell us what they think we need, rather than ask us what we want.

We’re here. We want to learn Swedish. We want to work, pay taxes, and be part of the wonderful society you have built. Let’s talk.

Elisabeth Svantesson has given her first long interview as finance minister, speaking to the Svenska Dagbladet daily just days after she presented her first budget on behalf of Sweden’s new, right-wing government.

The government has already faced accusations of deprioritising the climate crisis, and Svantesson conceded in the interview that its planned investment in nuclear power (which is a low-emission source of energy, but takes time to develop, so it pays off only in the long run) would also make it difficult to reach Sweden’s climate targets within the next decade.

Asked what will happen if Sweden does not meet its Agenda 2030 target, the sustainable development targets agreed by the United Nations, by that year, she said: “It would mean that we don’t meet the targets. If we don’t we don’t, but our ambition is to steer towards that goal.”

That quote, which was perceived as far more laissez-faire than the situation warrants, was met with criticism from the opposition.

“I’m astounded at how you sign agreements and vote for legislation in parliament only to ignore it when you feel like it,” said Green Party leader Per Bolund.

The Social Democrats’ former finance minister Mikael Damberg gave a diplomatic-or-patronising answer (a school of conflict avoidance that can be perfected only by a party that’s more used to being in power than not being in power) and guessed that Svantesson had perhaps not meant it like that. “Svantesson has had a lot to do this week, maybe she’s tired.”

Speaking of interviews, one Swedish newsroom has not yet been getting them, at least not with senior ministers. One of public broadcaster SVT’s top political interviewers, Anders Holmberg, points out that all four right-wing party leaders and several ministers have declined to appear on his “30 minuter”, a show famous for putting hard-hitting questions to politicians and senior decision-makers. It’s of course not mandatory to say yes to all interviews even as a politician, but it’s an unusual move.

It’s interesting that Bolund tried to attack Svantesson specifically on not following through on commitments. This has been a recurring piece of criticism since the new government was elected two months ago.

The budget was more conservative (in this particular case I mean conservative as in cautious rather than as in right-wing) than you might have expected based on the government’s election pledges, and it’s not the only campaign promise that they’ve been forced to backtrack on.

“The central thing is that they’re breaking most of their major election promises at the same time as as they’re not really managing to take care of the big social problems Sweden faces today,” Damberg told SVT.

To be fair, you would kind of expect him to say this (when has a political opposition party ever praised the government’s budget?), but significantly, the criticism hasn’t only come from the left-wing opposition.

Moderate Party politicians in the powerful Skåne region earlier this month slammed their party for failing to deliver the promised support to those suffering sky high power bills in the southern Swedish county.

“There are effectively no reforms, and they’re not putting in place the policies they campaigned for in the election,” the head of the liberal think tank Timbro told the Aftonbladet newspaper about the budget.

It will be interesting to see whether the label as “promise breakers” sticks, and whether that will affect the right-wing parties in the next election.

Parties make more and more pledges during election campaigns. Ahead of the 2014 election, a whopping 1,848 vallöften (election promises) were made, according to research by Gothenburg University, up from 326 in 1994.

You may not believe this, because the stereotypical image of the dishonest politician perhaps unfairly endures, but research shows that most politicians keep most of their election promises most of the time.

the deputy mayor of the town of Norrtälje, who got 15 seconds – technically 26 seconds – of fame after he was left speechless when a reporter asked him to defend hefty pay rises for top councillors has resigned, saying he wants to take responsibility for what happened.

He also told SVT about his long and very awkward silence on camera that his brain had simply blacked out after having worked for 13 hours straight and gone nine hours without food in the post-election frenzy.

Sweden Elects is a weekly column by Editor Emma Löfgren looking at the big talking points and issues after the Swedish election. Members of The Local Sweden can sign up to receive the column as a newsletter in their email inbox each week. Just click on this “newsletters” option or visit the menu bar.