A train connection between Bratislava and Berlin on day 40 of Jon's Cross Border Rail project. Photo: Jon Worth

In many ways, the lives of people in Europe have never been more intertwined: freedom of movement has made it simpler for people to relocate or work across borders, projects like Erasmus foster cultural and linguistic exchange, and the EU has connected politics across member states like never before.

But, as a new research project has revealed, the dream of a truly interconnected Europe has one very practical barrier: many of the rail connections between different countries are not fit for service.

“We are supposed to live in a borderless Europe, but when it comes to rail transport, borders still exist,” said Jon Worth, an activist and blogger who founded the Cross Border Rail project to highlight the issues in European rail transport.

His message to the European Commission? “The EU’s transport policy is failing.”

READ ALSO: ‘Something always goes wrong’: What I learned taking the train through Europe with two kids

Worth first noticed the problems with cross-border rail transport when travelling around Europe for his job as a communications consultant.

While services varied across different EU states, the one constant was that, regardless of the location or the countries involved, travelling across borders by train was often far more difficult and inconvenient than it needed to be.

This observation became the seed of an ambitious new project: to travel across every internal border within the EU, and European Free Trade Area (EFTA), via train. In doing so, he wanted to paint a picture of the scale of the problem across Europe. 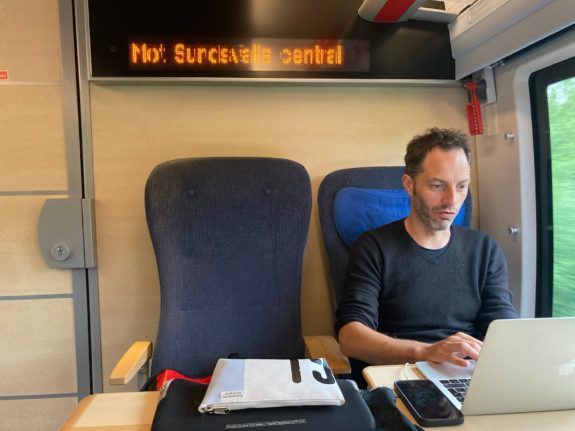 Jon travels through Sweden near the town of Sundsvall. Photo: Jon Worth

“You have to first know the problem exists and then you have to practically start to unpick that problem to work out what you’re going to do about it,” he told The Local. “I didn’t really think of this as the purpose of my project at the beginning, but I’m basically bottling up practical experience from the ground and taking it to policy makers and saying, this is what we need you to fix.”

From coastal routes in Italy to the mountains of central Sweden, the journey involved travelling more than 30,000km by rail, taking 186 different trains and travelling 900km by bike and 1,500km by ferry, taxi and bus when gaps in railway services appeared.

By experiencing the routes first-hand, Worth realised that cross-border services suffered from four key problems: repair work was needed on key areas of the track, some regions had infrastructure but no passenger transport, schedules were disjointed between countries and ticketing bugs were making it difficult for people to find and book services.

Worth noticed, for example, that passengers travelling from Germany to Strasbourg often had to shell out more than double the actual ticket price due to a bug in Deutsch Bahn’s tariff system.

While a Berlin to Kehl Sparpreis ticket normally costs €61.90 and a regional connection between Kehl and Strasbourg is just €4.30, people booking the entire journey will be hit with a bill of €147.80 for a full-price ticket.

To do: List Strasbourg as a station in the Baden-Württemberg tariff system to allow DB Sparpreis tickets to be booked cheaply from 🇩🇪 to Strasbourg (avoid needing to know the Kehl ticket split trick) pic.twitter.com/Hxdnu0uWXa

“This is especially absurd as Strasbourg is the seat of the European Parliament,” Worth explained.

In other places, including several routes between France and Spain, the services were good but there was simply no information on them available on many booking platforms.

That’s because the Spanish operators Euskotren and Rodalies de Catalunya don’t upload timetables to UIC Merits, the timetable system used by travel planners like DB Reiseauskunft and ÖBB Scotty. The result is that only travellers with a good local knowledge of rail services would even know that the trains were running.

“This type of data gap can be found anywhere in the EU,” Worth explained.

In some cases, a small amount of investment appeared to be the answer.

Like in the small town of Seifhennersdorf in Saxony, Germany, which has been left without its single rail service towards the Czech Republic due to a level crossing that needs to be repaired.

Or in the French town of Valenciennes – ironically enough, the location of the EU Railways Agency – where there is no direct route to Mons in Belgium due to 2km of missing track, and the one remaining route requires a long detour with irregular train services.

To do: maintain and increase the frequencies at Quévy border, ideally with a train every two hours, allowing connections at either Aulnoye or Maubeuge for Valenciennes. Medium term rehabilitate the line via Quiévrain pic.twitter.com/NzRJOCFMhb

In Lithuania, a train waits for hours in Turmantus before returning to Vilnius, rather than continuing the remaining 25km to Daugavpils in Latvia, leaving a gap in the connections between the two countries. In Worth’s view, a little extra fuel would be all it takes to solve this problem.

In other cases, countries had failed to co-ordinate their train timetables, making this services near-to-unusable.

This was the primary issue between Tallin in Estonia and Riga in Latvia, where passengers heading north face an almost three-hour delay when changing at Valga, and passengers heading south have to wait almost four hours for their connecting train.

Worth discovered a similar problem when heading from Marseille in France to Genova in Italy: there are no direct long-distance services via Nice and Ventimiglia and regional trains are so badly coordinated that anyone trying to make the trip has to wait at Ventimiglia for 1 hour 55 minutes heading eastbound and 52 minutes heading west.

These examples – and several more – were compiled into a list of 20 case studies where Worth claims the issues could be quickly and easily rectified.

“What I want to show is that there are a whole host of problems that you can solve without much money,” he said. “There are simple solutions to so many of these problems.”

READ ALSO: How a cross-border train has pushed house prices up in Switzerland and France

‘Practice what they preach’

On each day of his 40-day journey around Europe, Worth sent a postcard to EU Transport Commissioner Adina Valean – but has yet to receive a response.

“I want the EU to fix these problems, but I don’t think at the moment the EU – the Commission is particular – has the necessary knowledge or the necessary political will to really solve them,” he said. “The EU says they’re in favour of improving international passenger transport, but whether they’re actually fully practising what they preach, I’m not so sure.”

Having built up what he describes as a “head full of knowledge and a hard disk full of footage” through his first-hand experience of the trip and conversations with local activists, his question is: “Why is the EU not doing this, why is a Commission official not doing this?”

In concrete terms, the Green Party activist hopes that the EU will “get its hands dirty” and intervene when needed to ensure that communities along Europe’s borders are better served by the rail network, especially when the governments of one or more countries are slamming the brakes on a much-needed project.

“The European Commission at the moment has no idea what’s happening on the ground in the majority of cases,” Worth said.

This is the video summary of what I discovered

And why @Transport_EU @AdinaValean the EU's rail policy is failing pic.twitter.com/eqpbavp1tQ

For Worth, two factors will be crucial in solving Europe’s cross-border rail issue: having the political will to cooperate across borders and having a clear sense of how much a reliable rail service can affect the lives of residents in the region.

One example of this is the ease of travelling between Copenhagen in Denmark and Malmö in Sweden, where trains run every 20 minutes and around the clock.

“I met someone who was going to the dentist in Malmö from Copenhagen,” Worth said. “It basically shows how much people’s behaviour has changed because they’ve got a reliable train. People have got to be able to rely on the train and allow their lives to change, knowing that the train can take the strain.”

Regardless of whether trains are run by private or state companies, by Slovakia, Austria or Spain, the main priority is for governments to agree that “this is the function they want the trains to serve”, Worth said.

“Only when you’ve been to some of these places can you really understand fully what it would really take in order to fix those problems,” he said. “And that aspect of how the personal is political is really, really central for me.”

The Local has approached the European Commission for a comment.

READ ALSO: Yes, train travel across Europe is far better than flying – even with kids

The new express trains can reach a top speed of 320 kilometres per hour – up from the previous 300 km/hour – and will mainly travel on special “speedways”, initially between Dortmund, Cologne, Stuttgart and Munich.

Connections to Brussels and Amsterdam are set to follow in 2024. The trains will be featured on Deutsche Bahn’s new schedule set to come out on December 11th.

READ ALSO: Everything that changes in Germany in December 2022

From the outside, the Siemens-built train looks nearly identical to the current ICE 3 model, but the main improvements can be seen from the inside, said DB in a statement.

Above all, the new trains boast better lighting, mobile radio-transparent windows and space for eight bicycles. In addition, a fast lifting platform has been built to make it easier for wheelchair users or people with disabilities to get on board.

Deutsche Bahn ordered a total of 73 ICE 3neo trains from manufacturer Siemens, four of which have already been delivered, it said.

The last train is to be delivered in 2029 at the latest, with the new line-up to cost Deutsche Bahn around €2.5 billion.

Trying to get up to speed

The trains are urgently needed, said DB passenger transport board member Michael Peterson. “Reliability is not good at Deutsche Bahn at the moment,” and will “remain the case for a certain period of time”.

READ ALSO: ‘A disaster’: How did train travel in Germany get so bad?

The reason for this, he said, is that Deutsche Bahn is working at full speed to modernise its rail system, which has led to several delays, rerouted services and in some cases cancellations.

In addition to the ICE 3neo, a total of almost 140 somewhat slower ICE 4s are set to join the fleet.

According to Peterson, more than 450 ICE trains are set to join the network by the end of the decade – about 100 more than at present.

TRAIN TRAVEL
‘Something always goes wrong’: What I learned taking the train through Europe with two kids
Url copied to clipboard!