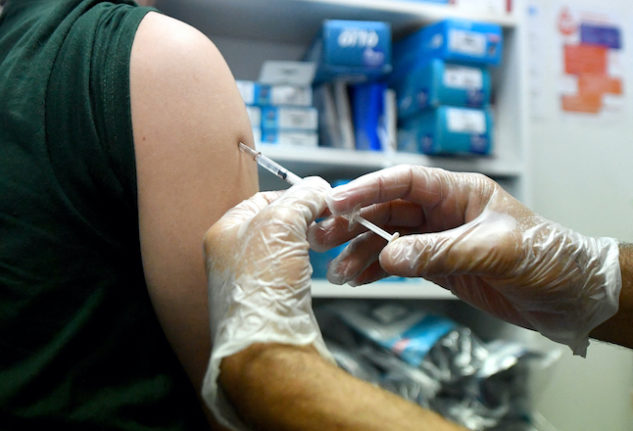 What are Spain's plans for the monkeypox vaccine? Photo: FRANCOIS LO PRESTI / AFP

Spain has 6,119 confirmed cases of monkeypox, according to the most recent data released on August 19th by the National Epidemiological Surveillance Network (RENAVE), coordinated by the Spanish Ministry of Health.

Infections continue to grow in Spain and it is currently the country with the most cases per inhabitant in the EU.

The monkeypox vaccination campaign began at the end of July 2022 and is currently being ramped up because of the rise in infections.

Here’s everything you need to know about Spain’s monkeypox inoculation plans.

Who is at risk from monkeypox?

Although around 80 percent of the cases in Spain have been detected in gay men, it is important to stress that it can affect either gender and any sexual orientation.

It is not a sexually transmitted disease and like Covid-19 it can be passed on by having direct or close contact with an infected person.

Children and pregnant women are also reportedly at a higher risk of having complications from contracting monkeypox.

Who will receive the monkeypox vaccine in Spain?

Currently, the monkeypox vaccine is only being administered in two doses to those who have come into direct contact with an infected person, those who are likely to and those who are at risk of being infected.

It is being offered to people between the ages of 18 and 45 who have multiple sexual partners.

To be able to request the vaccine you must not have previously received it, not have already had monkeypox, not have been in contact with a confirmed case within the previous ten days, or have symptoms consistent with monkeypox.

Currently, only the first doses are being administered, but if there are enough doses to go around, second shots will be given four weeks after the first.

How will the monkeypox vaccine be administered in Spain?

The vaccine has been administered in two doses, however, on Monday August 22nd Spain’s Public Health Commission approved that each monkeypox vaccine will be divided into five doses. This is a temporary measure to help deal with the current health crisis.

It means that instead of injecting 0.5 millilitres of serum in one dose, 0.1ml will be injected. However, pregnant women and the immunosuppressed will still be given the 0.5ml dose.

This new measure means that Spain will be able to vaccinate five times the number of people than it can now.

Spanish health authorities will have the capacity to administer 50,000 doses in the short term.

How can I request the monkeypox vaccine in Spain?

If you meet the requirements above, you can request your monkeypox shot by contacting your local health centre.

The availability or wait time will depend on what region of Spain you live in.

In Madrid for example, you can request an appointment for the vaccine online by clicking here. There are however reports on August 23rd that the rollout has been temporarily suspended in the Spanish capital.

In Barcelona, it is being offered at three centres – BCN Checkpoint, Clínic de Barcelona and Unitat d’ITS Drassanes-Vall d’Hebron.

No. As with the Covid vaccine, the monkeypox vaccine will not stop you from contracting the virus, but it does help limit some of the symptoms and the severity of the disease.

How effective is the monkeypox vaccine?

Dr. Rosamund Lewis, WHO’s technical lead for monkeypox, said in early August that “we have known from the beginning that this vaccine would not be a silver bullet, that it would not meet all the expectations that are being put on it and that we don’t have firm efficacy data or effectiveness data in this context”.

“The fact that we’re beginning to see some breakthrough cases is also really important information because it tells us that the vaccine is not 100 percent effective in any given circumstance, whether preventive or post-exposure,” Lewis added.

“We cannot expect 100 percent effectiveness at the moment based on this emerging information.”

A study carried out in 1988 among patients’ contacts showed that the smallpox vaccine was 86 percent effective at preventing monkeypox.

Olivier Schwartz, head of the virus and immunity unit at France’s Pasteur Institute said regarding this that “the vaccine protection figure of 85 percent dates from field studies in the 1980s and 1990s in DR Congo and is quite approximate”.

The vaccination being used to combat monkeypox in Spain is Imvanex, a vaccine used to protect against smallpox in adults.

The World Health Organisation (WHO) has declared the monkeypox outbreak a global health emergency and it has been detected in 87 countries.

Though this figure represents just 5 percent of the total 20,000 medicines sold in Spain, it is an increase of 150 percent compared to 2021 and represents what experts have deemed a “worrying” trend that is rising after two years of decline. The shortages last an average of four or five weeks.

This was the warning made by the CGCOF based on its data on the supply of medicines (CisMED), which is focused on ‘supply alert’ notices provided by almost 10,000 of the 22,000 pharmacies across Spain.

READ ALSO – Reader question: Are there limits on bringing medicines into Spain?

Of these shortages, experts say they are especially pronounced in medicines for the nervous system and cardiovascular groups, and “very significantly” pronounced with paediatric amoxicillin and some anti-diabetic drugs.

Medicines for the nervous system made up around 20 percent of the incidents, followed by cardiovascular therapeutics, with 19 percent, digestive 14 percent, and respiratory 13 percent.

READ ALSO: Pharmacies in Spain will be able to sell medical marijuana by the end of 2022

Stark as this statistic may seem out of context, however, it does not suggest that shelves in Spanish pharmacies are bare nor that Spaniards are being turned away by out-of-stock pharmacists.

Spain, he said, was suffering the second, adding that pharmacists can always replace or find alternative medicines. “Citizens have to be calm. It’s under control. We have the problem when it comes to looking for the medicine, not the citizens,” he added.

The causes of the shortages of certain medicines in Spain are various, but many stem from a combination of the centralised nature of production, meaning some medicines are produced only in certain parts of the world or even single factories, and a shortage of raw materials and packaging from Asian countries where production has been slow to recover from the pandemic shutdown, as well as the low price of medicines in Spain.

The issue is “a multifactorial problem that comes from problems with the increasingly globalised nature of drug manufacturing,” Aguilar said. “This supply problem has been affecting Spain for years, as well as the rest of Europe and the world.”

To try and ease the supply shortages, the CGCOF has launched a new campaign to expand ‘Farmahelp’, a collaborative network of pharmacies that already has almost 6000 participating branches.

The Farmahelp app allows patients to find medicines in nearby pharmacies when they are unavailable and connects the pharmacy branches so they can update one another about the availability of medicines.