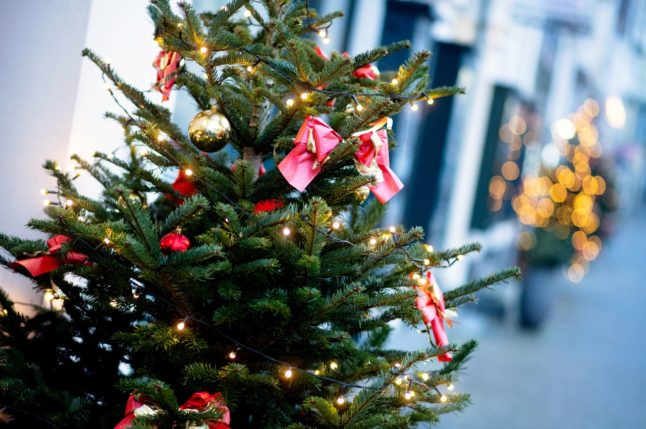 Christmas is almost upon us, and it’s the perfect time of year to spend time with loved one and treat ourselves. Of course, for international residents in Germany, the season can also present one or two linguistic challenges.

Even if your German friends and family speak good English, it’s nice to be able to impress them by thanking them for a delicious dinner or the ideal gift in their native tongue – or telling them how much you like their festive decor.

If the idea of doing that is turning you into the Grinch, never fear: we’ve got a handy guide for some of the key vocab that you’ll need to get through the season.

So whether you’re counting down the days until Christmas or swapping presents around the tree, here’s how to navigate the festive season in true German style.

Let’s deal with some of the basics first: what is this time of year even called in German?

Well, the general term for Christmas is ‘Weihnachten’. This tends to mean Christmas Day (the 25th) and can also be referred to as Weihnacht, Christfest or Heiliger Christ.

As you may know, however, the main day of celebration for most Germans is the 24th, or Christmas Eve. This is known as Heiliger Abend or Heiligabend, which basically translates as “Holy Evening”. It’s when most children can expect a special visit from Father Christmas or Santa Claus, who is known in German as the Weihnachtsmann.

In parts of western and southern Germany – as well as in Switzerland and Austria – a rather more glamourous gift-giving figure replaces the rotund man trying to squeeze down a chimney. Here, the Christkind – who is normally presented as an angelic young lady – will bring gifts to the children who’ve been good all year round.

The word in German for describing these traditions is Bräuche, which means “customs”, though Traditionen can also be used. These may come in handy when asking your friends about the festive practices in their region.

You can kick off an interesting discussion by asking something along the lines of: “Welche Weihnachtstraditionen habt ihr in deine Region?” (Which Christmas traditions do you have in your region?) or “Gibt es bestimmte Weihnachtsbräuche, die hier in Sachsen üblich sind?” (Are there certain Christmas customs that are common here in Saxony?).

And if you want a general word for a Christmas celebration, the word to use is Weihnachtsfeier.

In the run-up to Christmas

Of course, it’s not all about ripping open gifts and enjoying a slap-up meal on Christmas Day (or Eve). In fact, the festive period really kicks off on November 27th, which marks the start of Adventzeit.

The word Advent stems from the Latin for “arrival” and it’s a time of preparation for the arrival of Christ at Christmas. There are many German traditions that occur over the weeks running up to the 24th (when Adventzeit ends). Alongside the customary Adventskalender (advent calendar), you may see German friends or relatives lighting the candles on an Adventskranz.

The Adventskranz is a wreath made out of fir sprigs with four candles, which are normally a festive red colour. These symbolise the four weeks leading up to Christmas, with a new candle lit on every Advent Sunday. 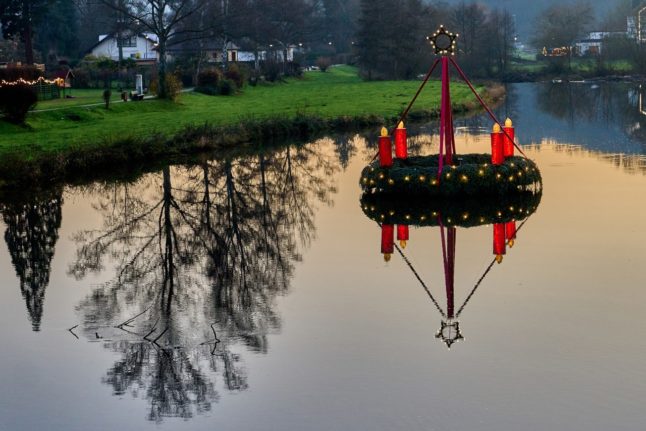 You may also notice that your local Weihnachtsmarkt (or Christmas market) opens on or around November 27th. This staple of the German Christmas period is normally timed to coincide with Adventszeit – though in some cases they do stay open after Christmas so people can enjoy another mug or two of Glühwein before the New Year.

Of course, it wouldn’t be Christmas without some festive treats, and Germans in particular are known to enjoy Adventsbacken – delicious cakes and cookies that are common at this time of year. Some Gebäck (little biscuits) are formed into festive shapes like stars and Christmas trees and flavoured with seasonal spices. But the king of all Adventsbacken has to be the Christstollen, a delicious type of fruit cake with marzipan that originated in Dresden.

In essence, this time of year is all about Vorfreude – the joy involved in looking forward to something before it happens.

Around the dinner table

A major part of traditional Christmas celebrations – in Germany and elsewhere – is enjoying a hearty meal with loved ones. That’s why brushing up on your eating and drinking vocab is essential for making it through the festive season.

Firstly, what can you expect to be served by your German pals, or Kumpels, over Christmas? Well, the Weihnachtsgans (Christmas goose) or Ente (duck) is normally an essential component, prepared with seasonal herbs like thyme and marjoram and infused with other flavours like sour apples and onions.

As a side dish, Rotkohl is standard: juicy, cooked-down red cabbage sweetened with apple juice and red wine. Then you’ll need potatoes (Kartoffeln) or dumplings (Knödeln) and lashings of Bratensauce (gravy). 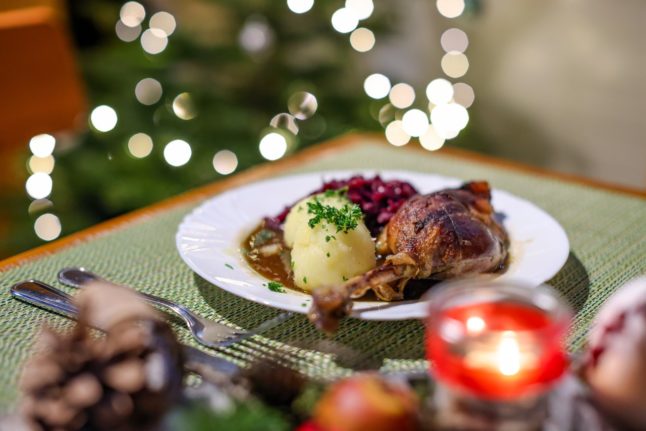 There are also other dishes that are commonly enjoyed by families on Heiligabend, such as Kartoffelsalat mit Würstchen (potato salad with sausages) in eastern Germany or even Karpfen mit Sauerkraut (carp and sauerkraut) in the coastal region of Schleswig-Holstein.

If you want to compliment your host on their excellent cooking skills, you can describe the food as “lecker” or “köstlich” (delicious) or simply say, “Danke, das hat mir geschmeckt” as the table is being cleared.

And if Uncle Günther is trying to foist yet another helping of potatoes on you when you can’t eat another thing, you can always say: “Danke, aber ich kann nicht mehr!” (Thanks, but I can’t eat anymore) or “Das war köstlich, danke, aber jetzt bin ich wirklich satt!” (That was delicious, thank you, but now I’m really full).

READ ALSO: 10 German Christmas cookies you have to bake this winter

Gift-giving is another key tradition for Germans at Christmastime. The gifts are usually placed under the Christmas tree, which is called Weihnachtsbaum or Tannenbaum in German.

Traditionally this was put up on Christmas Eve, though these days it’s not unusual for people to put it up much earlier. (Incidentally, the decorations on the tree – and elsewhere in the house – are known as Schmuck, or Weihnachtsschmuck.) 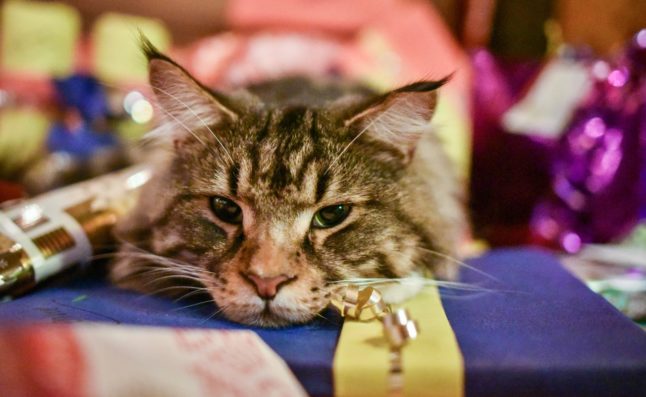 Don’t, whatever you do, make the mistake of using the German word “gift” to describe the presents that you buy people. Das Gift is a common false friend in German, because while it sounds like the English word it actually translates as “poison”. Instead, use the word Geschenke (or Geschenk in singular)to describe the gifts you’ve lovingly picked out for people. They’ll tend to be wrapped in Geschenkpapier, or wrapping paper, so people get a nice surprise when they come to open them.

To thank people for presents without reverting to “Vielen Dank” over and over again, a few of these phrases may come in useful:

“Was für ein schönes Geschenk. Danke dir.” (What a beautiful gift, thank you.)

Keep a handful of these phrases in mind and you’re sure to impress your German friends with your language skills this Christmas. Got any tips of your own for celebrating the festive period in Germany? Let us know.