“It’s pretty easy to define German style,” says Bernhard Roetzel, the author of books on men’s fashion such as ‘Gentleman: A Timeless Guide to Fashion’. “Nowadays the basic dress of a grown-up man is mainly blue jeans, some kind of sweatshirt and an anorak. The shoes are usually comfortable sneakers. This is the basic German fashion that everyone from workers to doctors wears, and it is suitable for 90 percent of occasions.”

The basic theme, he says, is comfort and practicality. “That is very important.”

According to Roetzel, this love for the practical stretches all the way back into the 19th century when most other Europeans still had strict public dress codes.

“It began with a movement called Lebensreform, which valued things like vegetarianism and woollen clothes, which were supposed to be healthy,” he says.

“Even if Germans at the time didn’t like political freedom, they loved the freedom to wear sandals. Freedom for Germans is to wear sandals in places where it is not appropriate!”

Dressing down became even more acceptable after the First World War, when Germany became a republic and the aristocracy, with its formal sense of dress, lost its importance. “The Nazis also propagated being active outdoors,” Roetzel notes. “Fashion was seen as something awful created by the French and the Jews to bring about the downfall of German culture.”

When the craze for casual wear crossed the pond from the US in the 1960s, Germans were slow to adopt it. But now jeans are even standard clothing for septuagenarians, he says. “Twenty years after jeans arrived people started to realise that they are great for all occasions – and now everyone wears them. This was the last blow to formal German clothing.”

Dress down for work

The German love for all-purpose clothes means that it is perfectly appropriate to wear jeans to work, according to Roetzel.

“If you don’t work in a bank or law firm you can probably wear jeans in most offices. A non-iron, short sleeve shirt is also very important. German men love these shirts, despite the fact that you get hot in them.”

You can even wear sneakers in the office. Or, if you have to look a bit smarter “some very cheap, comfortable leather shoes” will make you fit right in.

“In business, it is very important that you don’t stand out,” Roetzel advises. “If you are smartly dressed people will ask if you have an important meeting or will think you are looking for a pay rise. For everyday business, you dress as casually as possible.” 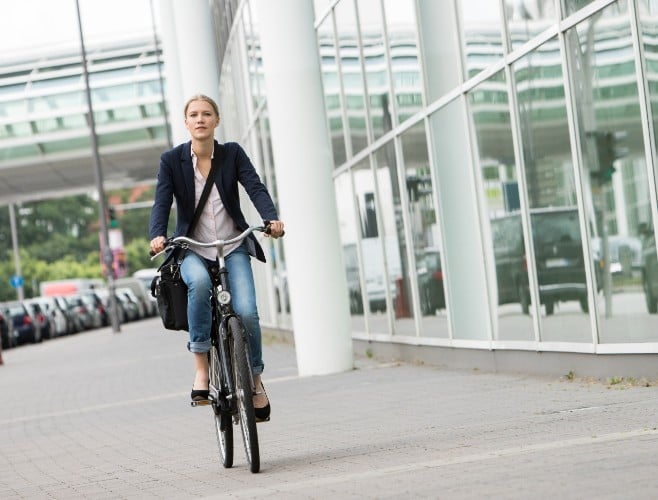 A woman cycles to work in jeans and a simple jacket in Hamburg. Photo: picture alliance / dpa | Christin Klose

Meanwhile, women’s workplace style, perhaps even more than men’s, is based on the principle of ‘the more forgettable the better.’

“Women in German business must not look too sexy,” says the fashion writer. “If you wear a skirt, for example, it should not be too short and heels should not be too high.” A “boxy, mouse grey suit” including a jacket that doesn’t complement one’s figure completes the look.

“Whereas in Italy, businesswomen carry Chanel bags, in Germany they usually carry a laptop bag or something very practical. Makeup is also rather reduced, not too much lipstick, nothing that is too obvious,” he says.

Ties are basically a redundant piece of apparel in modern Germany, meaning wearing one really is a matter of choice in most settings.

Even the most formal occasions, such as weddings, funerals and important birthdays are much more informal events than they once were. 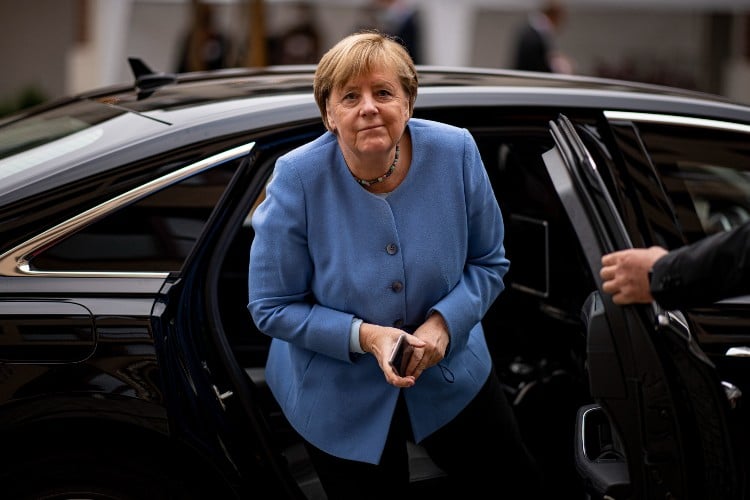 Anyone looking for inspiration need look no further than recently retired German Chancellor Angela Merkel, who famously wore variations on the same trouser suit for most of her career.

“She had different colours and fabrics but that was her uniform and she also found her hairstyle and that was it. I don’t think she had a stylist,” Roetzel says. “That’s what Germans love. It’s recognizable and it doesn’t look expensive.”

In fact, the cheaper the better. “Olaf Scholz has always earned a lot of money but his clothes are awful, his suits are awful – this is just perfect for Germany,” says Roetzel.

Splash the cash subtly (or on outdoor clothes)

This is not to say that all Germans wear cheap clothes, but they don’t make a big fuss about the brands that they do wear.

“People want to express status by wearing certain brands,” Roetzel points out. “But in Germany, this is done in a very subtle way. You will see small details in the clothes and glasses of a professor or doctor that will tell you a lot. Class exists but people hide their status because it is negative to show it off. This can be hard for foreigners to detect.”

There is one major exemption though to the rule of not flaunting your wealth – outdoor apparel.

“Outdoor clothes are really a big thing here,” Roetzel says. “It gives people a sense of freedom and healthiness. Spending €800 on an outdoor jacket is perfectly okay. But it is a sin to spend the same amount on a tailor-made suit – you will destroy your image if you admit to doing this.”

Moreover, anyone who wants to impress Germans through their possessions would be better advised to buy a good car or modern kitchen, the fashion expert says. “It is perfectly normal to have a very expensive kitchen, but your clothes should still be cheap.”

The German (dis)interest in fashion can actually tell us a lot about deeper German values.

“There is an old Prussian saying of mehr sein als schein (content is better than appearance). Germans feel that if something is too beautiful there must be something fishy about it. Anyone who is too smartly dressed could be a conman,” says Roetzel.

“Germans are very honest, they like to be very direct. They say “what’s the point in not wearing sandals if it’s hot?’”

With over 100,000 Indians in Germany, and over 175,000 people of Indian descent, it’s little wonder that Diwali – the famous five day Hindi festival of lights starting this year on Monday October 24th – is being celebrated all around the Bundesrepublik.

READ ALSO: Indians in Germany: Who are they and where do they live?

Even the House of Parliament in Frankfurt is honouring the holiday for the first time with a special reception on October 30th.

Diwali takes its name from the clay lamps or deepa (the event is sometimes called Deepawali) that many Indians light outside their home. With the days shortening in Germany, there’s all the more reason to celebrate light — especially over lively music, traditional dance and authentically spicy Indian cuisine.

We have rounded up some of the top events to celebrate around Germany, both the week of Diwali and afterwards, stretching into mid-November. If you have an additional event to suggest, email us at [email protected]

Happen to be in Heidelberg? Then it’s not too late to head to the Sweet Home Project, which will be cooking up a storm starting at 6:30pm. The menu includes an assortment of Indian sweets and savoury dishes. The collective only asks that participants bring along a candle (and a hearty appetite).

If you miss this event, and are still craving some (really) spicy traditional cuisine, the Firebowl Heidelberg is hosting a Diwali party on October 29th, replete with lots of food and drink and Bollywood beats the whole night.

For those who fancy a Feier with a full-buffet, this celebration in Dreieich delivers through an all-you-can-eat dinner with traditional fare. Starting at 5pm and stretching into the early hours of the morning, the festive feast includes traditional Bollywood music by Derrick Linco. There’s also a dance party for kids, who receive free admission up to seven years old and €25 up to 14 years. Normal tickets go for €40 per person.

On November 4th at 6pm, the Deutsch-Indische Gesellschaft Düsseldorf will be hosting a family-friendly party in nearby Ratingen with classical Indian music and dance, a huge dinner and Bollywood music led by DJ SA-ONE. Tickets cost about €40 each, but children under six receive free entry.

The Indian Students Association of Bonn-Cologne will be hosting its biggest event of the year: for €10, event goers can try an array of Indian food, play classic games and tune into cultural performances.

READ ALSO: Moving from India to Munich changed my life

Whether you like traditional bhajans or meditative ragas, this concert will capture many of the classic sounds of Indian music with artists such as Anubhab Tabla Ensemble, Debasish Bhattacharjee and Somnath Karmorak taking center stage. The performance starts at 5pm and costs €10.

November 12th and 13th in Berlin

Indian food fans will get to enjoy 12 stands devoted to Indian cuisine and products, all coming from the local Indian community. The weekend-long festival will also include stand-up comedy from the Desi Vibes Comedy Group. Karaoke fans will also enjoy singing along with the Sounds of India group, followed by an after party on Saturday. All this only costs €2 at the door.