Firefighters worked for eight hours to free the man from a tunnel under a road in central Rome. Photo: Vigili del Fuoco (Italian fire brigade)

An Italian man had to be rescued after becoming trapped in a collapsed tunnel near the Vatican, suspected of being part of a gang burrowing its way to a nearby bank.

Firefighters spent eight hours digging him out from under a road in the west of Rome, before he was finally freed on Thursday evening and taken to hospital.

“Two people from Naples were arrested for resisting a public official and two, from Rome, for damage” to public property, a police spokesman told AFP.

The rescued man, one of the two Romans, remains in hospital, he said without giving an update on his condition.

“We are still investigating, we do not exclude that they are thieves, it is one of the theories,” he said.

For Italian newspapers, however, the motive was clear, with reports noting the tunnel was found near a bank ahead of the August 15th long weekend, when residents traditionally head out of town and much of Rome is left empty.

“The hole gang,” headlined newspapers Repubblica and Corriere della Sera, while La Stampa said: “They dig a tunnel to rob a bank, and one of them is buried underground.”

Other reports referred to the suspected burglar as l’uomo-talpa, or ‘mole man’.

An AFP reporter at the scene on Thursday saw the man brought out alive on a stretcher, after a day-long operation involving dozens of emergency service workers using mechanical diggers.

The tunnel began underneath an empty shop that had recently been rented.

“We all thought that the people there were renovating the place. So we had no suspicions and we did not hear noises either,” a resident, Michele, who lives in the same building told AFP.

A paved road of more than 500 kilometres (310 miles) begun in 312 BC by Roman statesman Appius Claudius Caecus, the ‘Via Appia‘ is an archaeological treasure trove, where an ongoing excavation hopes to uncover the actual starting point of the road in Rome.

The artery leading south to the key port of Brindisi at Italy’s heel provided a gateway to the eastern Mediterranean, especially Greece, and was of strategic importance for the armies and merchants of a quickly expanding Rome.

This week, archaeologists showed off progress in their attempt to dig deep enough to unearth the beginning of the road, hidden far beneath Rome’s Baths of Caracalla, built some five centuries after the Appian Way.

“What we see today is the result of an excavation that began in July with the central goal of finding clues to the location of the first section of the Appian Way,” said archaeologist Riccardo Santangeli Valenzani.

The first, earliest section of the road is the one that provides “the most problems regarding the precise and exact location”, the professor at Roma Tre University cautioned. 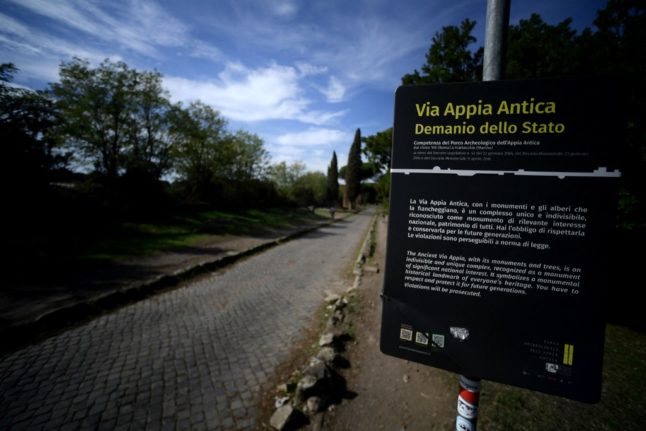 Construction of the Appian Way required Herculean engineering, from the levelling of the land, building of ditches and canals and surfacing of the road with gravel and heavy stone, to the building of post offices and inns to support the thousands of soldiers and merchants headed southward.

Wandering today along the Appian Way, where massive blocks of paving stone are still visible in sections, is to take a trip through the past.

Imposing monuments such as the first century BC tomb of a consul’s daughter, Cecilia Metella, sit alongside ancient catacombs and churches, crumbling tombstones of Roman families and leafy villas.

The Appian Way sheds light not only on the Roman Republic and later Roman Empire, but also on life and death in the Middle Ages with its pilgrimage shrines and crypts.

The road also provides a glimpse of modern architectural wonders, such as the sumptuous villas owned by Italy’s rich and famous, including film legend Gina Lollobrigida or former premier Silvio Berlusconi. 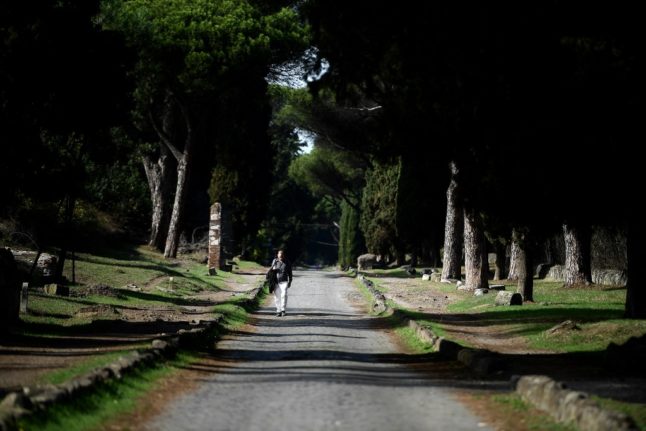 Italy, which earlier this month presented its bid for the Appian Way to UNESCO, already has 58 sites recognised as World Heritage Sites, the most of any country.

They include entire historical city centres, such as Rome, Florence and Venice, and archaeological areas such as the ruins of Pompeii and Herculaneum.

Work to locate the starting point of the Appian Way, believed to be some eight metres below ground, has so far been complicated by groundwater.

Nevertheless, digging in higher strata of ground has unearthed relics from different periods, including a marble bust from the second century AD and an early papal square coin, minted between 690 and 730. 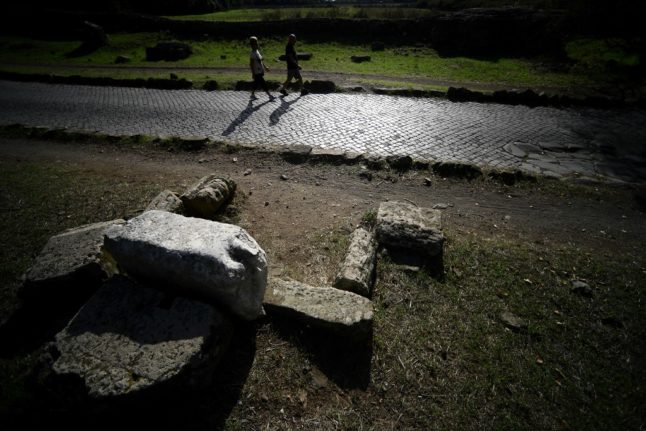 Wandering today along the Appian Way is to take a trip through the past. (Photo by FILIPPO MONTEFORTE / AFP)

Archaeologists have also found fragments of glass and ceramics, mosaic and bits of amphora.

So far, the excavation has reached residential or commercial structures dating back to the time of Emperor Hadrian, who died in 138 AD.

Archaeologist Daniele Manacorda said the current excavation had reached the point of “late ancient Rome, the one that began to live in the ruins of ancient Rome”.

“If we could continue to dig deeper, we would find archaic Rome,” he said.