Firefighters are working to put out wildfires across southern Italy and in parts of the north on Monday. Photo by Federico SCOPPA / AFP

Wildfires have caused devastation in many parts of Europe this summer, and Italy is no exception.

The Italian fire brigade was called out to almost 33,000 forest or brush fires between June 15th and July 21st, with blazes reported everywhere from Puglia to Trentino-Alto Adige and Abruzzo to Sicily.

As exceptionally hot and dry conditions persist into August, yet more fires broke out over the weekend causing devastation up and down the country.

Here’s a look at the areas worst affected at the moment. 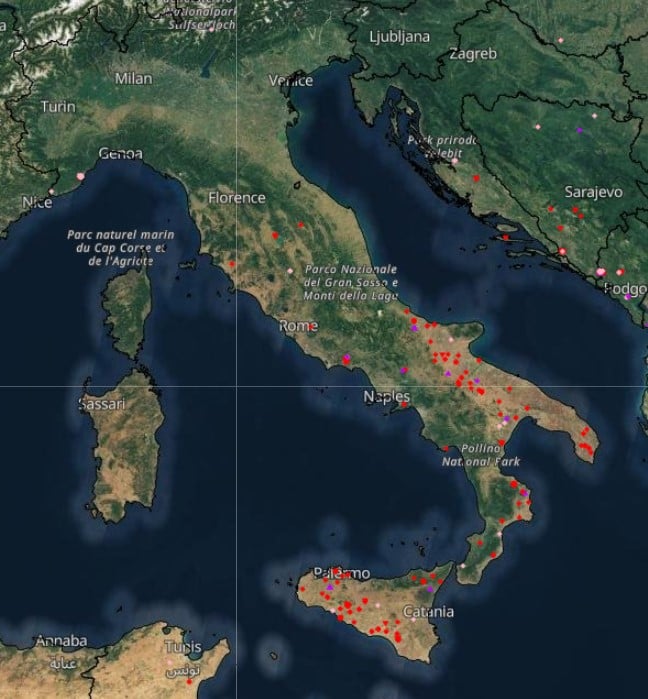 Some 120 people were evacuated on Monday as a wildfire raged near Savona amid sweltering midsummer heat.

The fire burned through woodland in the area of Arnasco and Villanova d’Albenga over the weekend before intensifying.

More homes were at risk on Monday, firefighters said, particularly in the Borgo Verde and Coasco neighborhoods.

Helicopters and several Canadair planes were assisting fire crews on the ground on Monday.

“Half the island is burning,” read headlines in local Sicilian media on Monday, as firefighters were reportedly struggling to attend all the blazes reported across the island.

Sicily has been hit by the largest number of fires overall this summer, according to the national fire brigade.

In the provinces of Palermo, Ragusa, Messina, and beyond “a succession of fires are destroying hectares of woods and vegetation”, reports local newspaper La Sicilia, which added that many fires were believed to have been started deliberately.

READ ALSO: Italy is burning – but many wildfires could be prevented

A major fire on Monte Giancaldo, a mountain overlooking the city of Palermo, burned throughout Sunday night and into Monday, but fortunately didn’t reach residential areas.

No deaths or major incidents were reported, but the risk of fire damage to homes and land is ever-present on the island, where temperatures remain among the hottest in Italy.

Another part of Italy badly affected by wildfires this summer, like every year; in Puglia, firefighters were battling more than a dozen blazes on Monday.

These included two fires that burned 50 hectares of woodland in the Foggia area, and a blaze stretching for more than a kilometre in scrubland near the coast between Tricase Porto and Marina di Andrano, an area popular with holidaymakers.

Several houses in the area were evacuated on Sunday, while the Tricase-Andrano road was closed to traffic as fire crews battled the flames with assistance from Canadair planes.

As is the case in Italy every year, the most fires were reported in the hotter, drier southern regions.

READ ALSO: Will summer 2022 be Italy’s hottest ever?

Sicily has recorded the highest number of wildfires this summer, with firefighters called out 6,534 times so far according to fire brigade statistics.

While prolonged hot and dry conditions make wildfires more likely – and more severe – the vast majority of such blazes in Italy are believed to be caused by human actions, and six in ten are started deliberately according to Coldiretti, Italy’s national farmers’ union.

Italy has registered at least three wildfires a day since the start of July, data from EFFIS shows.

A cold front arriving from northern Europe brought temperatures as low as minus 18 degrees Celsius in the eastern Alps in the early hours of Friday, while minus 14 was recorded in Garfagnana, and minus 5 in Milan, Turin and inland Sicily.

Snow also fell at higher altitudes in the south overnight, with local residents capturing images of Vesuvius covered in a dusting of snow.

“We will return to normal seasonal temperatures. However, we’re no longer used to the cold and snow”.

While the north in particular shivers in freezing temperatures and snow was forecast for many areas, including at lower altitudes, central and southern regions were warned to expect heavy rain and stormy conditions from Friday and into the weekend.

Italy’s Department for Civil Protection issued a lower-level alert for storms on Friday in parts of five southern Italian regions, including Basilicata and Calabria, and a medium-level amber alert for Campania, where the agency warned of a risk of hailstones and flash floods.

Showers, strong winds and thunderstorms are expected to spread further across the centre-south and to the Adriatic coast by Saturday, when temperatures are again forecast to drop below zero in inland parts of the centre and north.

Weather website Meteo3B predicted temperatures would drop to 0-1 C across much of the north overnight and in the early morning on Saturday.

Forecasts showed the mildest temperatures in the coming days would be in the southeastern region of Puglia and along the southern coasts of Sicily and Calabria, where a steady 8-10 degrees Celsius is expected over the weekend.

CLIMATE CRISIS
‘By a substantial margin’: How summer 2022 was Europe’s hottest on record
Url copied to clipboard!