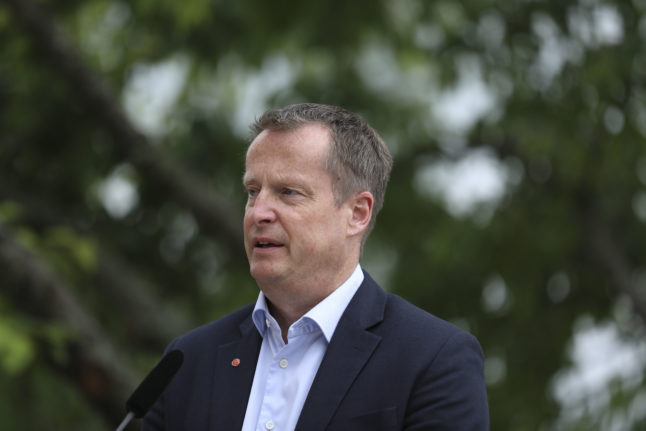 In an interview with the Dagens Nyheter newspaper (DN), Ygeman said that it was a problem for Sweden that there are districts where a majority of inhabitants come from outside the Nordic countries – Denmark, Sweden, Iceland, Finland and Norway.

“I think it’s bad to have areas where the majority have a non-Nordic origin,” he told DN.

Ygeman suggested a 50 percent limit when pushed by the newspaper’s reporters on whether he thought Sweden should bring in a similar target to that of Denmark, where the ruling Social Democrats have brought in a target that no housing development in the country should have more than 30 percent of the population with a non-Western background by 2030.

“That’s just a starting point. If we’re going to impose that number [as a target] for real, then we need to carry out an inquiry and think about it. But if you want to have my “hunch”, I’d put the number there,” Ygeman said.

Ygeman, however, believes that other factors – such as unemployment, level of education and criminality – are more important than residents’ country of origin when determining whether an area should be classed as ‘vulnerable’ or not.

Sweden’s “vulnerable areas” – the lowest on a three-step scale, followed by “risk areas” and “especially vulnerable areas” – are described by the police authority as areas “characterised by a low socioeconomic status where criminals have an effect on the local community”.

“But the socio-economic factors also have an ethnic dimension,” Ygeman told DN, “as around 75 percent of the long-term unemployed have a non-Nordic background.”

Ygeman told DN that the number of residents with a non-Nordic background could “maybe be one of five criteria”, when classifying “vulnerable areas”.

Another Danish idea which Ygeman would like to see in Sweden is so-called “flexible renting”, DN reports.

This consists of letting workers and students skip housing queues in “vulnerable areas”, in a bid to fill these areas with people who can support themselves financially.

“We need to make it easier for people who work or study to move into vulnerable areas and risk areas,” Ygeman told DN.

“We need quite tough requirements so that we don’t fill vulnerable areas up with people who are less able to pay.”

On the question of where the unemployed and those who are less able to support themselves will live, Ygeman told DN that “in all cities with vulnerable areas, there are twenty areas which aren’t vulnerable. Why do newly-arrived people need to live in that exact vulnerable area?”

This could be due, in part, to the fact that it’s easier to get an apartment in these areas, since they have a bad reputation and are cheaper, the newspaper’s reporters argued.

“Maybe we need to think about whether the requirements on income and being able to support yourself should be as strict across municipalities,” Ygeman told DN. “Maybe requirements should be a bit more simple in other areas, so you get a more mixed population.”

Ygeman did, however, admit to DN that Denmark’s debate concerning “non-Western” immigrants has “maybe not been so successful”.

“There’s something about that ‘non-Western’ thing which sounds ‘off’,” he said.

“There’s a colonial touch to it. ‘We’re Western, you’re…’ I think ‘non-Nordic works just as well to describe the problem.”