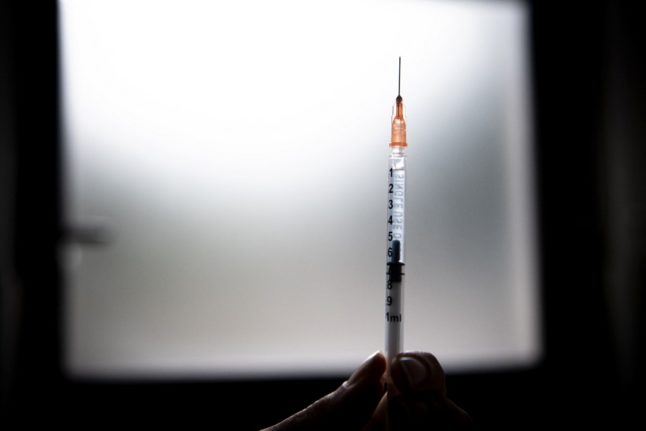 A medical health worker prepares a dose of the monkeypox vaccine at the Edison municipal vaccination. ALAIN JOCARD / POOL / AFP

Spain is one of the world’s worst-hit countries, with 4,298 people there infected with the virus, according to the health ministry’s emergency and alert coordination centre.

“Of the 3,750 (monkeypox) patients with available information, 120 cases were hospitalised (3.2 percent) and one case has died,” the centre said in a report.

An official would not give the specific cause of death for the fatality pending the outcome of an autopsy.

Brazil also reported a death on Friday; local authorities said a 41-year-old man who had serious immune system problems died of monkeypox on Thursday in Belo Horizonte, the capital of the southeastern Minas Gerais state.

“It is important to underline that he had serious co-morbidities, so as not to spread panic in the population. The death rate is very low” for monkeypox, said Minas Gerais health secretary Fabio Baccheretti, who added that the
patient was undergoing cancer treatment.

A global health emergency
Early signs of the disease include a high fever, swollen lymph glands and a chickenpox-like rash.

According to the WHO, more than 18,000 cases have been detected throughout the world outside of Africa since the beginning of May.

The disease has been detected in 78 countries, with 70 percent of cases found in Europe and 25 percent in the Americas, WHO chief Tedros Adhanom Ghebreyesus said on Wednesday.

As cases surge globally, the WHO on Wednesday called on the group currently most affected by the virus — men who have sex with men — to limit their sexual partners.

Ghebreyesus told reporters that the best way to protect against infection was “to reduce the risk of exposure”.

“For men who have sex with men, this includes, for the moment, reducing your number of sexual partners, reconsidering sex with new partners, and exchanging contact details with any new partners to enable follow-up if
needed,” he said.

The disease usually heals by itself after two to three weeks, sometimes taking a month.

A smallpox vaccine from Danish drug maker Bavarian Nordic, marketed under the name Jynneos in the United States and Imvanex in Europe, has also been found to protect against monkeypox.

Though this figure represents just 5 percent of the total 20,000 medicines sold in Spain, it is an increase of 150 percent compared to 2021 and represents what experts have deemed a “worrying” trend that is rising after two years of decline. The shortages last an average of four or five weeks.

This was the warning made by the CGCOF based on its data on the supply of medicines (CisMED), which is focused on ‘supply alert’ notices provided by almost 10,000 of the 22,000 pharmacies across Spain.

READ ALSO – Reader question: Are there limits on bringing medicines into Spain?

Of these shortages, experts say they are especially pronounced in medicines for the nervous system and cardiovascular groups, and “very significantly” pronounced with paediatric amoxicillin and some anti-diabetic drugs.

Medicines for the nervous system made up around 20 percent of the incidents, followed by cardiovascular therapeutics, with 19 percent, digestive 14 percent, and respiratory 13 percent.

READ ALSO: Pharmacies in Spain will be able to sell medical marijuana by the end of 2022

Stark as this statistic may seem out of context, however, it does not suggest that shelves in Spanish pharmacies are bare nor that Spaniards are being turned away by out-of-stock pharmacists.

Spain, he said, was suffering the second, adding that pharmacists can always replace or find alternative medicines. “Citizens have to be calm. It’s under control. We have the problem when it comes to looking for the medicine, not the citizens,” he added.

The causes of the shortages of certain medicines in Spain are various, but many stem from a combination of the centralised nature of production, meaning some medicines are produced only in certain parts of the world or even single factories, and a shortage of raw materials and packaging from Asian countries where production has been slow to recover from the pandemic shutdown, as well as the low price of medicines in Spain.

The issue is “a multifactorial problem that comes from problems with the increasingly globalised nature of drug manufacturing,” Aguilar said. “This supply problem has been affecting Spain for years, as well as the rest of Europe and the world.”

To try and ease the supply shortages, the CGCOF has launched a new campaign to expand ‘Farmahelp’, a collaborative network of pharmacies that already has almost 6000 participating branches.

The Farmahelp app allows patients to find medicines in nearby pharmacies when they are unavailable and connects the pharmacy branches so they can update one another about the availability of medicines.