“They possess fantastic competencies which municipalities should be taking advantage of,” university lecturer Christina Johnsson said.

One topic discussed in the course is Swedish discrimination legislation. Johnsson, who is a lecturer in public law, opened discussions with cases where students’ clothing had been questioned, and where students wanted to be defined by a different gender. This provided the backdrop of a debate among the Ukrainian teachers regarding the issue of gender identity.

“It’s maybe a bit unusual for us,” Hanna Karasevych said during a coffee break, “but it’s not completely new or shocking. I had a female student who wanted to be a boy and changed her name,” she said.

Malmö University is the first in Sweden to arrange the introductory courses which are carried out on behalf of the National Agency for Education (Skolverket). The Ukrainian teachers will receive basic knowledge of the Swedish school system and the relationship between teacher and student. Other topics such as human rights, cultural issues and the school’s democratic responsibility are on the agenda.

“The Ukrainian school system has undergone big changes over the past few years, transitioning from a Soviet-style system to a school which puts children in focus,” Olga Skozyk said.

“Since the war broke out, I truly understand the degree of responsibility teachers have to build an identity for future members of society.”

“The Ukrainian school should have more insight on discrimination issues, there has been a big gap when it comes to these sort of issues”, said Iryina Kliuchnikova.

The idea behind the four-week course is for the Ukrainian teachers to be ready to start working in autumn, as teaching assistants to Ukrainian pupils attending Swedish schools, for example. This is something the teachers are looking forward to.

“Just to get together with other teachers from Ukraine here during the course has been such a huge joy for us,” Hanna Karasevych said. 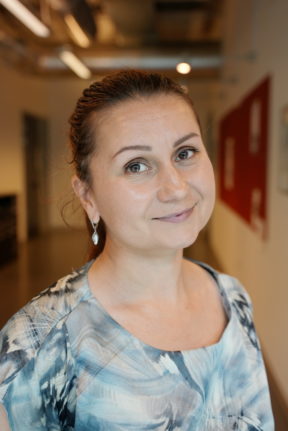 “Such a huge joy for us.” Hanna Karasevych is enjoying the opportunity to get together with other teachers from Ukraine. Photo: Jan Samuelsson/TT

“Everyone smiles more and more each day. I have been a teacher for 20 years and have a big passion for teaching. I am an English language teacher and hope to be able to teach in a Swedish school. But any kind of job is okay, I want to have teaching back in my life.”

The teachers also liked the fact that the course covered issues like gender identity and discrimination, which aren’t discussed as much in Ukraine.

“[Students’ clothing] is not a big topic in Ukraine,” Tetiana Petrushehak said. “But it is a complicated issue and it is good that we got the chance to discuss it.”

“We are very grateful for this course and to get the opportunity to work in schools. Everyone has different goals and expectations but we all want a new start in Sweden,” she added. 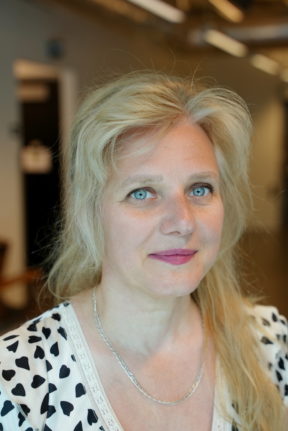 “We can learn a lot from the Swedish system but we can’t copy it exactly,” Olga Skozyk said. Photo: Jan Samuelsson/TT

“There are a lot of differences in mentality, identity and other things,” Skozyk said.

Lecturer Christina Johnsson was impressed by her students’ level of knowledge, adding that the Ukrainian school system is “more developed than the Swedish one” in some respects.

She also noted that the Ukrainian teachers ask the same sort of questions that other teachers or students studying to become teachers ask, and her students’ status as refugees is rarely brought up in conversation.

“It seems to be very important for them to be in the professional sphere, focusing on teaching and not discussing the fact that they are refugees,” she said.

Malmö University plans to set up a course with similar content which will award university credits, in partnership with Stockholm University, Gothenburg University and Dalarna University. In the future, this course could also be used for refugee teachers from other countries, not just Ukraine.

PARTNER CONTENT
Decoding the future: The college providing the skillset for next-gen jobs

His comments come after Germany gave the greenlight for them to be given to Kyiv.

Following weeks of pressure from Ukraine and other allies, Berlin finally agreed to send 14 Leopard 2 tanks, seen as among the best in the world.

The move opened the way for other European nations that operate Leopards to send tanks from their own fleets to Ukraine, further building up the combined-arms arsenal Kyiv needs to launch counter-offensives.

“I don’t exclude the possibility that we can do that in the future, working with other countries,” Jonson told AFP in an interview.

“We could possibly contribute in various ways. It could be related to logistics, maintenance, training, but also tanks as such.”

Sweden, which has broken with its doctrine of not delivering weapons to a country at war, last week pledged a major package of arms for Ukraine, including modern howitzers and armoured vehicles.

“Right now our focus is on delivering that rather substantial contribution,” Jonson said.

On Wednesday he held talks with senior Nato officials in Brussels with Sweden’s bid to join the Western military alliance facing fresh problems from Turkey.

Ankara on Tuesday postponed accession talks with Sweden and Finland, lashing out at Stockholm over protests that included the burning of the Koran.

The decision further diminished the chances of Turkey ratifying their Nato bids before its May presidential and parliamentary elections.

Jonson insisted that it remained a top priority for the Swedish government to become a member of the alliance “as quickly as possible”.

“We’re respectful that this is of course a decision for Turkey and for its parliament,” he said.

Sweden dropped a long-standing policy of non-alignment last year after Russia’s invasion of Ukraine sparked fears that the country was outside Nato’s collective security umbrella.

“Of course, being a full member of Nato will provide us with Article Five and the security guarantees, and that’s important of course as well,” he said.