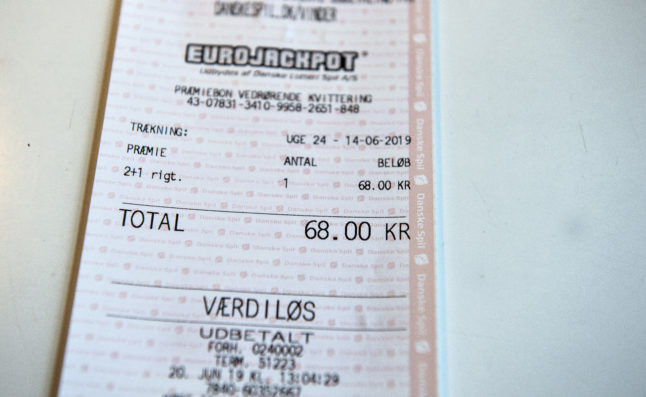 A file photo of a Eurojackpot lottery ticket. A record prize will be paid out in Denmark. Photo: Henning Bagger/Ritzau Scanpix

The owner of the winning ticket can now look forward to receiving a prize of over 759 million kroner (102 million euros), news wire Ritzau reports.

The holder of the ticket contacted Danske Spil and the company has verified the ticket.

The fortunate lottery winner, who has remained anonymous, is reported to have “scrunched the ticket up” and thrown it in a drawer without checking the numbers against the prizewinning sequence.

That was rectified on Sunday when the jackpot coupon was fished out of its hiding place.

“I was completely surprised and shaking all over my body. But it feels like a fairytale to be so lucky and to be able to secure my family’s future for several generations,” the winner is quoted as saying.

Prior to Friday, the record Eurojackpot win in Denmark was 315 million kroner, which went to a ticket holder in Helsingør in 2015.

Last year saw a similarly high jackpot of 311 million kroner claimed by a person in Roskilde.

Friday’s prize is not only the record jackpot in Denmark, but anywhere in the history of the Europe-wide Eurojackpot lottery.

The European lottery became available in Denmark in 2012 and has since resulted in 187 Danish jackpot millionaires.

Exchange rates might sound like a spectacularly dull topic, but if you live in Denmark (where, naturally, your day-to-day living expenses are paid in kroner) but have income from the UK in pounds, then the movement of the international currency markets will have a major impact on the money that ends up in your pocket.

This is not an uncommon situation – Denmark-based Brits may work remotely as freelancers from British companies and be paid for invoices in pounds, while retired Brits might be receiving a British pension.

Others might have income from rental properties or investments.

So a big loss in the value of the pound against the euro – and by extension, the krone – can have a major impact on Brits in Denmark.

The most recent fall in the value of the pound was sparked by the UK government’s new mini budget and has already seen a relative recovery.

The pound-krone exchange rate over the last month. Chart: xe.com
But while this one-time fall is spectacular, it’s also part of a longer term trend in the fall of the value of the pound, especially since Brexit, that has seen people such as foreign-based pensioners lose a big chunk of their income.

So if you have income in pounds, what are your options?

Income in kroner – obviously this isn’t an option for everyone, especially pensioners, but the best way to protect against currency exchange shocks is to make sure that you’re paid in the same currency that you spend in.

Alternatively, income in euros: the advantage of the euro in Denmark is that its value is pegged to the krone and not sensitive to exchange rate fluctuations.

For those being paid from abroad, billing in euros means you could work in any EU country – including the anglophone ones like Ireland – and get your salary in euros.

Depending on your employer, it might also be possible for you to ask to bill in euros.

Work in Denmark – if you’re currently not working or want to switch to local currency income, then an obvious option is to take up some work in Denmark.

Depending on your work and residency status, as well as the field you work, the practicality of this option ranges wildly from one person to the next.

Exchange rate – if your income can only be paid in pounds, it’s crucial to ensure that you get the best exchange rate possible and that you don’t waste money on international transfer fees.

The best options here are online banks or money transfer services, which compete on the rates that they offer, so usually have the most advantageous rate.

Some online banks also have the option to set up accounts in both pounds and kroner, so that you can receive money in pounds and spend it in kroner without having to make bank transfers, which can attract fees.