Italy's worst drought in 70 years is devastating rice fields and other crops in northern Italy with estimated losses of over 30 percent of the harvest. Photo by Piero CRUCIATTI / AFP

The roar of Dario Vicini’s motorcycle cuts through the silence as he drives across his rice paddy to survey the destruction wrought by Italy’s worst drought in 70 years.

His fields are nothing but desolation, with rice stems slowly dying in the sandy ground.

“Under normal circumstances, I would never have been able to ride my motorcycle over the field,” Vicini explained to AFP.

“At this time of year, the plants would be up to my knees and the rice field would be flooded,” he said.

“Here, they’re tiny, because the water needed to irrigate them has never arrived.”

READ ALSO: Drought in Italy: What water use restrictions are in place and where?

Vicini’s “Stella” farm, located in the village of Zeme in the Po Valley, 70 kilometres southwest of Milan, is part of Italy’s “golden triangle” of rice paddies.

Italy supplies half of the European Union’s rice, and this is the country’s predominant rice-growing area, stretching west from Pavia in Lombardy to Vercelli and Novara in Piedmont. 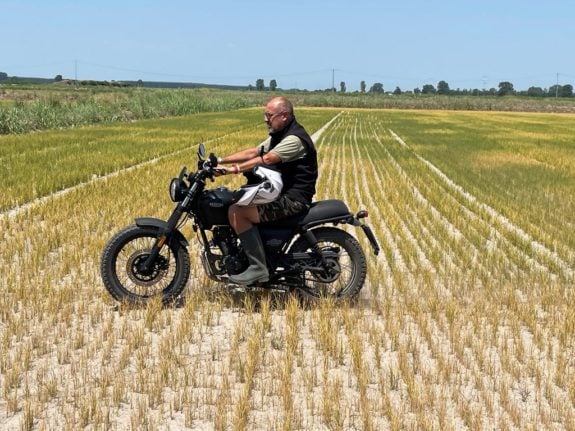 Farmer Dario Vicini crosses his rice field on motorbike to see the extent of the damage caused by the drought, in Zeme, northern Italy. Photo by Brigitte HAGEMANN / AFP

“It’s the fault of climate change,” said the 58-year-old farmer, who estimates his income has fallen by 80 to 90 percent.

Enrico Sedino, another farmer in the area, is even more worried: “If there’s no more water, I can lose up to 100 percent of my turnover,” he said.

Around the rice paddies, cracks are visible in the parched earth and the feeble, stunted rice shoots are covered with a thin layer of dust.

The small irrigation canals that run alongside the fields are dry, or nearly so.

The waters of the Po River – Italy’s longest river whose flat drainage basin is the wide, fertile plain perfect for growing rice – are this year at a historically low level not seen since 1952.

The water, when it comes, arrives in dribs and drabs. 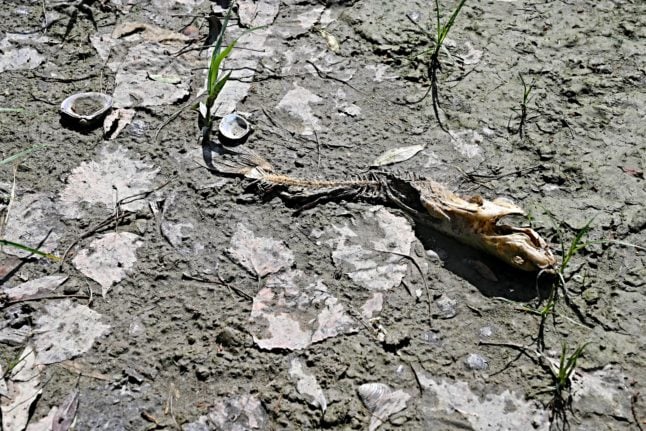 This photo taken on July 5, 2022, show a dead fish skeleton on the river bank of the Po River at Polesella village, near Rovigo city, in the region of Veneto, amid the worst drought to affect northern Italy’s rivers in 70 years. (Photo by Andrea PATTARO / AFP)

Zeme Mayor Massimo Saronni, a rice farmer himself for three decades, said that not only is the harvest suffering “but the whole ecosystem is withering away”.

Before, the rice paddies resounded with the song of crickets and the croaking of frogs, while clouds of dragonflies flittered above the fields. Freshwater birds like grey herons and white ibises fed on insects.

Now, “being in the countryside with such a heavy silence, it’s depressing, you feel like you’re on the moon!” he said.

Vicini’s 50 hectares are irrigated through the Cavour Canal, which carries the waters of the Po, while other rice paddies in the Pavia region are fed by Lake Maggiore or Lake Como.

But regional authorities have warned that those lakes’ reserves could run out by the end of July.

Early this month, Italy’s national government declared a state of emergency in five regions — Emilia-Romagna, Friuli-Venezia Giulia, Lombardy, Veneto and Piedmont — four of which are supplied by the Po.

Farmers are forced to abandon some fields to deal with others. “just like the doctor who during the Covid-19 pandemic chose those with a chance of being saved,” Saronni noted, bitterly.

The Po’s historically low water levels have had catastrophic consequences for Italy’s more than 4,000 rice farms, spread over 220,000 hectares (543,630 acres).

Sixty percent of the 1.5 million tonnes of rice produced in Italy each year are exported. Among the more than 200 varieties are the famous Carnaroli, Arborio, Roma and Baldo brands, essential for the preparation of typical
risotto dishes.

Rice consumption rose in 2020 when millions of Italians were forced by the coronavirus lockdown to cook at home.

“The situation is desperate, not to say apocalyptic,” said the rice farmer, estimating the economic damage as “incalculable… millions of millions of euros”.

“If there is no harvest this year, there is a risk that many companies will close down or go bankrupt”.

A cold front arriving from northern Europe brought temperatures as low as minus 18 degrees Celsius in the eastern Alps in the early hours of Friday, while minus 14 was recorded in Garfagnana, and minus 5 in Milan, Turin and inland Sicily.

Snow also fell at higher altitudes in the south overnight, with local residents capturing images of Vesuvius covered in a dusting of snow.

“We will return to normal seasonal temperatures. However, we’re no longer used to the cold and snow”.

While the north in particular shivers in freezing temperatures and snow was forecast for many areas, including at lower altitudes, central and southern regions were warned to expect heavy rain and stormy conditions from Friday and into the weekend.

Italy’s Department for Civil Protection issued a lower-level alert for storms on Friday in parts of five southern Italian regions, including Basilicata and Calabria, and a medium-level amber alert for Campania, where the agency warned of a risk of hailstones and flash floods.

Showers, strong winds and thunderstorms are expected to spread further across the centre-south and to the Adriatic coast by Saturday, when temperatures are again forecast to drop below zero in inland parts of the centre and north.

Weather website Meteo3B predicted temperatures would drop to 0-1 C across much of the north overnight and in the early morning on Saturday.

Forecasts showed the mildest temperatures in the coming days would be in the southeastern region of Puglia and along the southern coasts of Sicily and Calabria, where a steady 8-10 degrees Celsius is expected over the weekend.