People cool off in Basel during a Swiss heatwave. Photo by Fabrice COFFRINI / AFP

Switzerland is famous for its alpine views but I don’t need a dramatic backdrop for my perfect summer’s day. I just need a quiet place by the water and bearable temperatures. As the second heatwave of summer 2022 hits Europe, it seems inevitable we will soon come to dread this season.

I fear the perfect Swiss summer’s day will soon be spoken about only in the past tense. Before I forget, here is mine. I go to the river within walking distance of my home. There is no entrance gate, no charge and no snack bar, just a stretch of cool, clear water, mostly knee deep, with some pools big enough to swim in.

Nature is a greater presence here than humans. There is plenty of shade. Sitting in a dappled area, I am treated to the sight of a common merganser leading her seven half-grown chicks around from pool to pool. My children are lucky that they can share in this idyllic experience. Will their children have the same good fortune?

Coming from one of the Continent’s cooler climates, I am perfectly happy when it’s 20 degrees in summer. Twenty-five I can live with. But when it’s 30 or 35, I want to escape. The living creatures dependent on the river feel the same. And it’s not just about air temperature. Swiss rivers are also heating up with worrying consequences for biodiversity.

We hear a lot about the effect of the climate crisis on Swiss glaciers, which are in steady decline and could disappear by the end of the century, causing an array of chain reactions, some foreseeable, some not.

But what about the rivers? They are equally under threat both in terms of temperature and water quantity. They also rely to a greater or lesser extent on the glaciers for their flow.

A recent EPFL study led by Adrien Michel found that by the year 2100, average river discharge could decrease by 30 per cent in the mountains and 25 per cent in Swiss lowland areas.

That is the most extreme scenario, in which we take no action to curb global warming, and it would also see summer water temperatures increase by 4°C in the Swiss Plateau. The combined effect of warming and water scarcity will have a severe and rapid impact on ecosystems.

In this high-emission scenario, glaciers would all but disappear. Similar predictions were made the by the government’s Hydro-CH2018 hydrological scenarios (admin.ch) last year.

On the other hand, if CO2 emissions are reduced in line with the Paris Climate Accord, “both Alpine and Swiss Plateau rivers would only be 1°C warmer at the end of the century, and discharge would decrease by 5% in mountain catchments while remaining nearly unchanged in the lowlands”. 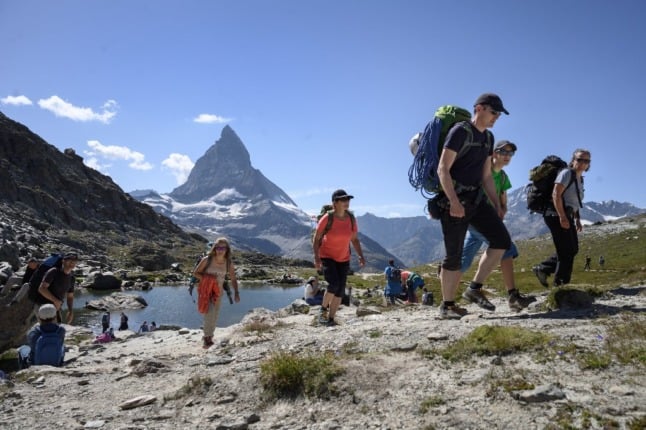 Heatwaves are now a common occurrence in Switzerland. (Photo by Fabrice COFFRINI / AFP)

The goal of the Paris Agreement, adopted in 2015, is to limit global warming to well below 2 degrees, preferably to 1.5 degrees Celsius by 2050, compared to pre-industrial levels.

We know from the science that a deep transformation is needed to achieve this goal. Transformation must start early and result in major emission reductions even before 2030. That’s just around the corner, yet there is little sign of this happening.

READ MORE: How to keep your cool during Switzerland’s heatwave

The latest interim report from UN Climate Change, the UN entity tasked with supporting the global response to the threat of climate change, does not inspire confidence. The results so far have been paltry and the need to increase ambition, to use the UN formulation, is “high and urgent”.

Adrien Michel, with his focus on rivers, gives an indication of what level of ambition is needed. “Our study of river discharge and temperatures shows, for one, that the impact of global warming is inevitable, and that we must begin making changes today, through energy and agriculture policies, for example. It’s also showing us that we can still save a part of our environmental heritage – but only if we act swiftly and aggressively.”

Do you see anything swift and aggressive coming out of the Swiss political system? I don’t. Nor do I see my own behaviour changing enough. Part of the problem is that the enormity of the issue breeds denial or apathy. Responsibility is spread too thin, a version of the bystander effect.

EXPLAINED: How Switzerland’s largest cities are combating the heat

In Andri Snær Magnason’s climate crisis book On Time and Water he talks about how the impact of our lifestyle, the fire we are stoking, is invisible and that we therefore do not perceive our everyday disasters.

“It would be instructive if everyone had to store the oil barrels they use, if we saw the world that way. Our family’s trips abroad over the last ten years amount to a hundred barrels of oil.”

More often than not, I don’t walk to my precious river, I drive. In fact I drive short trips almost every day that could be done on foot, by bicycle or by public transport. Our family will also burn through some barrels later this summer on unnecessary flights.

As I receive another heatwave warning on my phone, and plan to avoid going outdoors for another day, I wonder how long it will be before these unwelcome temperatures become the norm and the perfect summer’s day spent by a cool, clear river will be an impossible dream. 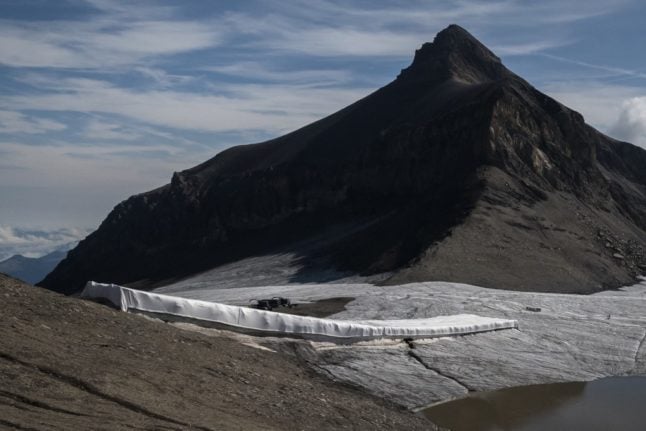 Following a dry winter, the summer heatwaves hitting Europe have been catastrophic for the Alpine glaciers, which have been melting at an accelerated rate.

The pass between the Scex Rouge and Tsanfleuron glaciers has been iced over since at least the Roman era.

But as both glaciers have retreated, the bare rock of the ridge between the two is beginning to emerge — and will be completely ice-free before the summer is out.

“The pass will be entirely in the open air in a few weeks,” the Glacier 3000 ski resort said in a statement. 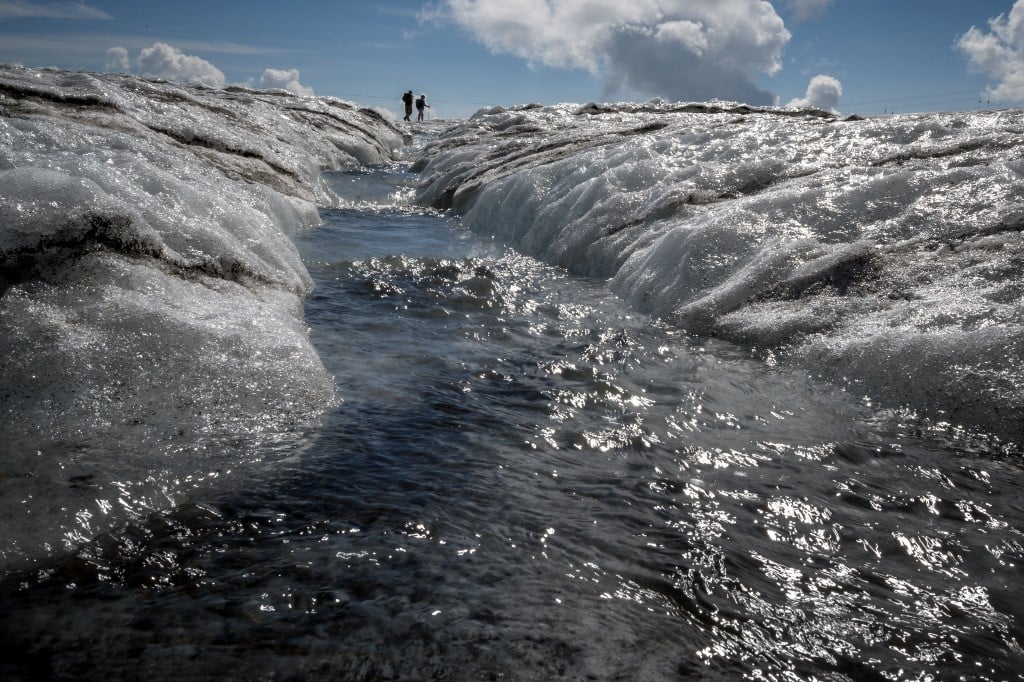 A picture taken on August 6, 2022 shows tourists walking next to a meltwater stream flowing from the Tsanfleuron Glacier above Les Diablerets, Switzerland. – Following several heatwaves blamed by scientists on climate change, Switzerland is seeing its alpine glaciers melting at an increasingly rapid rate. (Photo by Fabrice COFFRINI / AFP)

While the ice measured around 15 metres (50 feet) thick in 2012, the ground underneath “will have completely resurfaced by the end of September”.

The ridge is at an altitude of 2,800 metres in the Glacier 3000 ski domain and effectively marks the border between the Vaud and Wallis cantons in western Switzerland.

Skiers could glide over the top from one glacier to the other. But now a strip of rock between them has emerged, with just the last remaining bit of ice left. 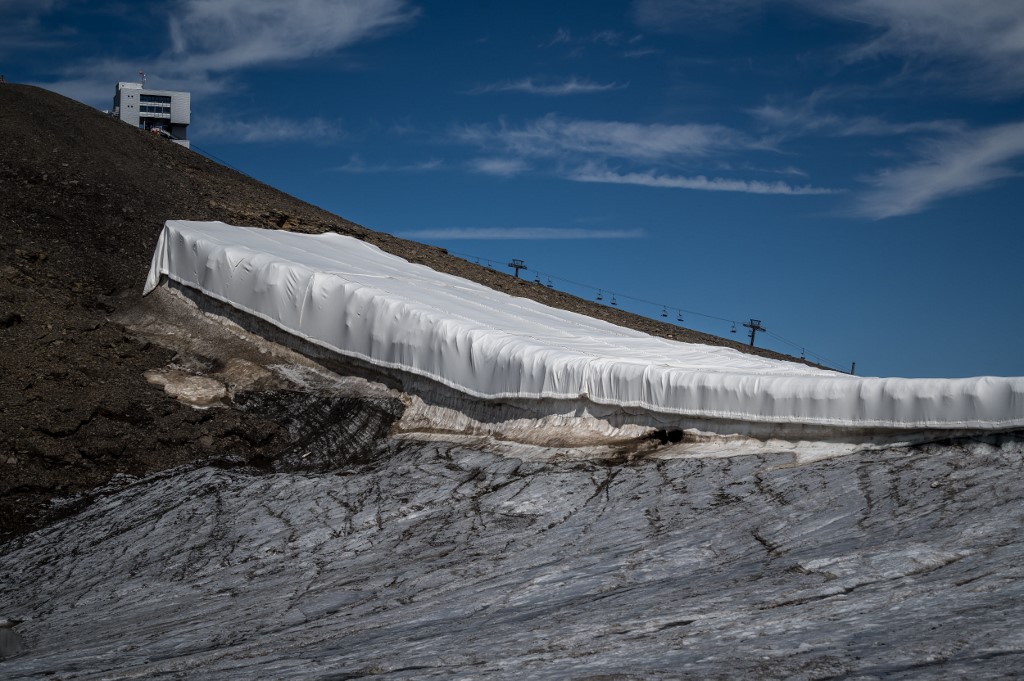 A picture taken on August 6, 2022 shows blankets covering snow from the last winter season to prevent it from melting next to Glacier 3000 ski lift at the melting Tsanfleuron Glacier above Les Diablerets, Switzerland. – Following several heatwaves blamed by scientists on climate change, Switzerland is seeing its alpine glaciers melting at an increasingly rapid rate. (Photo by Fabrice COFFRINI / AFP)

The ski resort is working out how to adapt to the new reality if people cannot ski between the two glaciers.

“We are planning to renew the facilities in this area in the coming years, and one idea would be to shift the route of the current chairlift to allow more direct access to the Tsanfleuron glacier,” said Tschannen.

Covers have been put on sections of the Tsanfleuron glacier by the pass to protect them from the Sun’s melting rays.

Glaciologist Mauro Fischer, a researcher at Bern University, said the loss of thickness of the glaciers in the region will be on average three times higher this year compared to the last 10 summers.

The melting of the glaciers makes them more unstable, which makes them less viable for winter sports and hiking, but it also means that things buried in the ice for years — even decades — can re-emerge.

In the past two weeks, two human skeletons were found on glaciers in Wallis.

Work is underway to try to identify the remains. According to the Swiss news agency ATS, the Wallis police have a list of some 300 people who have gone missing since 1925.

In July 2017, the Tsanfleuron glacier turned up the bodies of a couple who disappeared in 1942.

The bones of three brothers who died in 1926 were found on the Aletsch glacier in June 2012.

And last week the wreckage of a plane that crashed in the Alps in 1968 was discovered on the Aletsch glacier.

The bodies of the three people on board were recovered at the time but the wreckage was not.