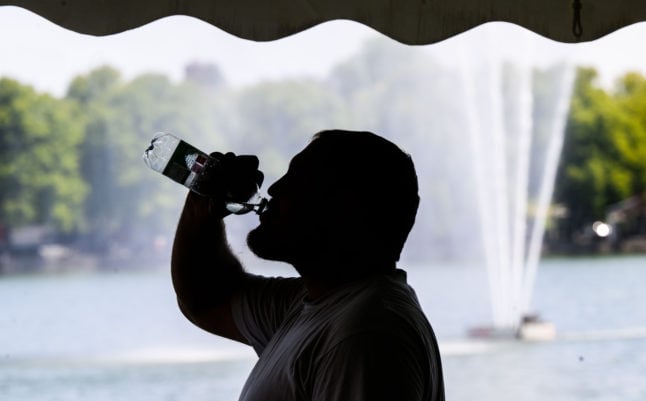 A purple heat warning was in place for most of Germany on Tuesday, as temperatures were expected to soar towards 40C in some regions.

The extreme heat is to move eastwards on Wednesday, and it will ease off slightly on Thursday with thunderstorms expected.

READ ALSO: Germany braces for hottest day of the year 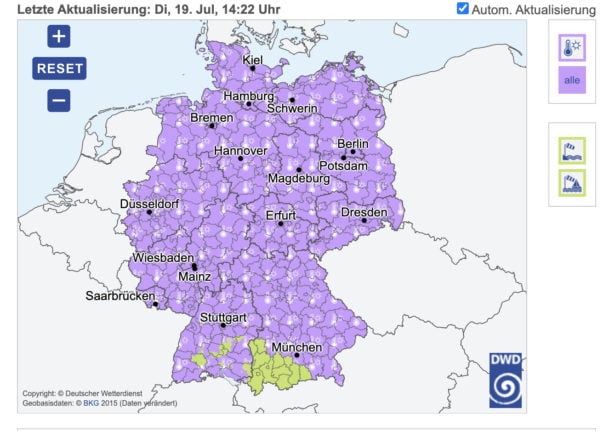 “Younger people should look out for the elderly and remind them of the importance of drinking enough and keeping cool,” the minister wrote on social media while retweeting advice from the Health Ministry on coping with the heat.

“Their lives (elderly people) are in danger in the coming days. Consideration and active help are needed now.”

Alcoholic beverages combined with high temperatures dilate the blood vessels, blood pressure drops and the body loses fluids, the centre said. This can lead to circulatory problems and even unconsciousness.

Since the summer heat leads to increased sweating and an increased need for fluids, alcoholic drinks are not appropriate, the centre said.

The centre urged people to drink water, unsweetened tea or isotonic drinks to quench their thirst.

In view of the heat-related dangers, the social association VdK demanded a heat protection plan with comprehensive plans for nursing homes.

“We urgently need a crisis plan for heat events, which causes stress, in particular to people in nursing homes and hospitals,” VdK President Verena Bentele told the Redaktionsnetzwerk Deutschland.

“A heat action plan is needed, with comprehensive guidelines for care providers: from the storage of medication to structural measures such as the installation of thermal windows and shading systems.”

The VdK leader also pleaded for an information campaign for family caregivers. “Those who are cared for at home must not be forgotten,” she said.

Bentele warned that the current heatwave could be life-threatening, especially for the elderly, those in need of care and the chronically ill.

Trade union Verdi called for hitzefrei (days off work or school because of heat) and longer breaks for workers because of the heat.

READ ALSO: Hitzefrei – is it ever legally too hot to go to work or school?

Authorities across Germany have been warning people to take care in the heat.

Forest fires are also a major fear as temperatures rise. The highest warning level has been issued in 10 out of Germany’s 16 federal states, including Bavaria, Baden-Württemberg, North Rhine-Westphalia, Mecklenburg-Western Pomerania, Brandenburg and Saxony-Anhalt, as well as in Hesse, Berlin, Rhineland-Palatinate and Lower Saxony.

The Bavarian minister of forestry, Michaela Kaniber, called on all forest visitors to be especially careful.

“The current heatwave and the prevailing drought mean that in many places the forest ground is covered with dried-up, easily flammable leaves, twigs and needles. Even a carelessly discarded cigarette butt is enough to start a momentous forest fire.”