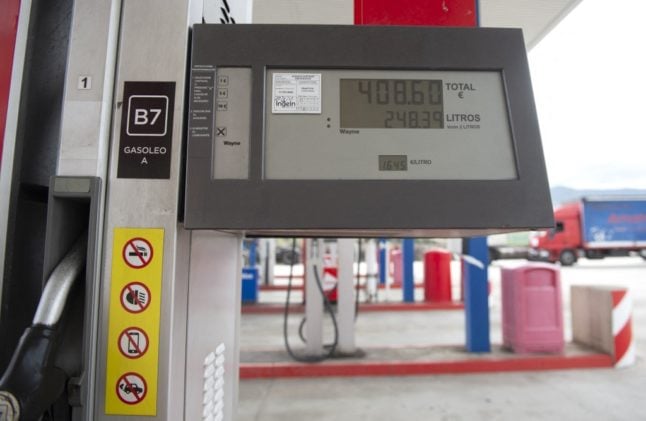 A petrol pump in Pamplona in March. Photo: ANDER GILLENEA/AFP

There has been a lot of economic doom and gloom across Europe in recent months, especially in Spain, where inflation has reached a 37-year high and prices ranging from eggs and olive oil to utilities bills have all skyrocketed.

Russia’s invasion of Ukraine shocked already volatile fuel markets, and petrol and diesel prices have spiked across the world as a result.

A silver lining for Spaniards, however, is that petrol prices have now dropped for the third consecutive week, this time by four cents, to a price of €2.072 per litre on average. That represents the lowest price in the last five weeks.

Diesel is also cheaper for the second week in a row, after a fall in price of 5.4 cents. Diesel is now sold on average at €2.022 per litre, which is the lowest price of the last month.

These reduced rates, it must be said, are calculated without counting the government’s 20 cent discount on fuel prices, which will further ease the financial strain on drivers.

What determines the price of fuel?

The international price per barrel affects the cost of fuel around the globe, but that is only part of it.

The reasons for the price increase are varied. One is the increase in demand due to the economic recovery after the pandemic, but there is also an increase in the price of a barrel of oil, as a result of Russia’s invasion of Ukraine.

Every petrol station franchise has other expenses such as production, distribution and marketing costs, which include wholesaler and retailer margins. This may be what makes smaller franchise fuel stations cheaper than big national chains.

The price is also affected by taxes and other associated costs, such as the maintenance of strategic reserves and the contribution to the National Energy Efficiency Fund.

In Spain, liquid fuels derived from petroleum are subject to two taxes: VAT and the Special Tax on Hydrocarbons (IEH).

How to find the cheapest petrol stations?

Prices vary from region to region and area to area, so how do you know where to find the cheapest place to fill up?

One of the best ways to find out the cheapest place is in fact via Google Maps, where you can find the up to date prices for each station. It works both on the mobile app and a computer. First, click on Petrol Station or Gasolinera button, which appears below or next to the search bar. This will generate a map of all the petrol stations and their prices, closest to you. You can also change the search area, if you want to check the prices somewhere else.

Keep in mind that not all petrol stations will display prices. If you want to find out the prices of different types of petrol, as well as diesel at a particular petrol station, simply click on it and it will give a list of the types it offers and the prices.

There are several other websites that work in a similar way to Google Maps, including elpreciodelagasolina.com and dieselogasolina.com. You simply type in or find your region and the sites will produce a map, along with a list of the cheapest petrol stations near you.

You can also consult the website Geoportalgasolineras, from the Ministry of Industry, Energy and Tourism.

This online page allows you to research ahead of time so you know where it’s cheaper to refuel according to your city or region. It publishes updated prices and also allows you to filter the results by type of fuel.

Apps such as GasAll and Gasolineras España are also good options, which detail the prices of petrol near you and allow you to compare the price of different types.

The OCU also has a search engine for cheaper places to fill up in your area, available here.

Keep an eye out for the section with a list of all existing discount plans too.

Filling up a tank of petrol or diesel in Spain costs between €16 and €23 more than a year ago, making it the most expensive August on record – despite the government’s 20 cents per litre discount on fuel.

Filling an average 55 litre tank with either petrol or diesel now costs around €93, which is equivalent to €16 more than a year ago for petrol, and €23 more for diesel.

Despite these record breaking prices, fuel prices in Spain have actually been falling in recent weeks, reaching their lowest values since May.

As of Thursday 4th August, petrol in Spain is sold on average at €1.702 per litre, and diesel €1.693, including the government discount.

Without the discount, the price of petrol is €1.902 per litre and diesel €1,893 on average, according to figures from the European Union Oil Bulletin.

The government’s reduction on fuel costs, introduced as part of an ongoing raft of measures to help Spaniards amidst the cost of living crisis, means consumers save around €11 every time they fill up the tank.

The 20 cent reduction on the litre was introduced in March of this year, when fuel prices jumped and crossed the €2 per litre threshold.

Fortunately for Spaniards, the combination of falling prices and the government taking 20 cents off the litre mean that Spanish fuel prices are below the European average, where petrol costs €1.856 and diesel €1.878 across the member states.