Dancers perform during the "Marcha del Orgullo" Pride parade in Madrid, on July 9, 2022. - MADO (Madrid Pride) is a series of street celebrations that take place during the city's LGBTIQ Pride week. The Pride parade is the highlight of the week. (Photo by OSCAR DEL POZO / AFP)

Demonstrators in the Spanish capital gathered in the late afternoon behind a large banner with the slogan “visibility, pride and resilience”.

Some participants carried water pistols and sprayed each other to keep cool in the searing heat. Others went bare-chested and danced to the rhythm of Brazilian and techno music. 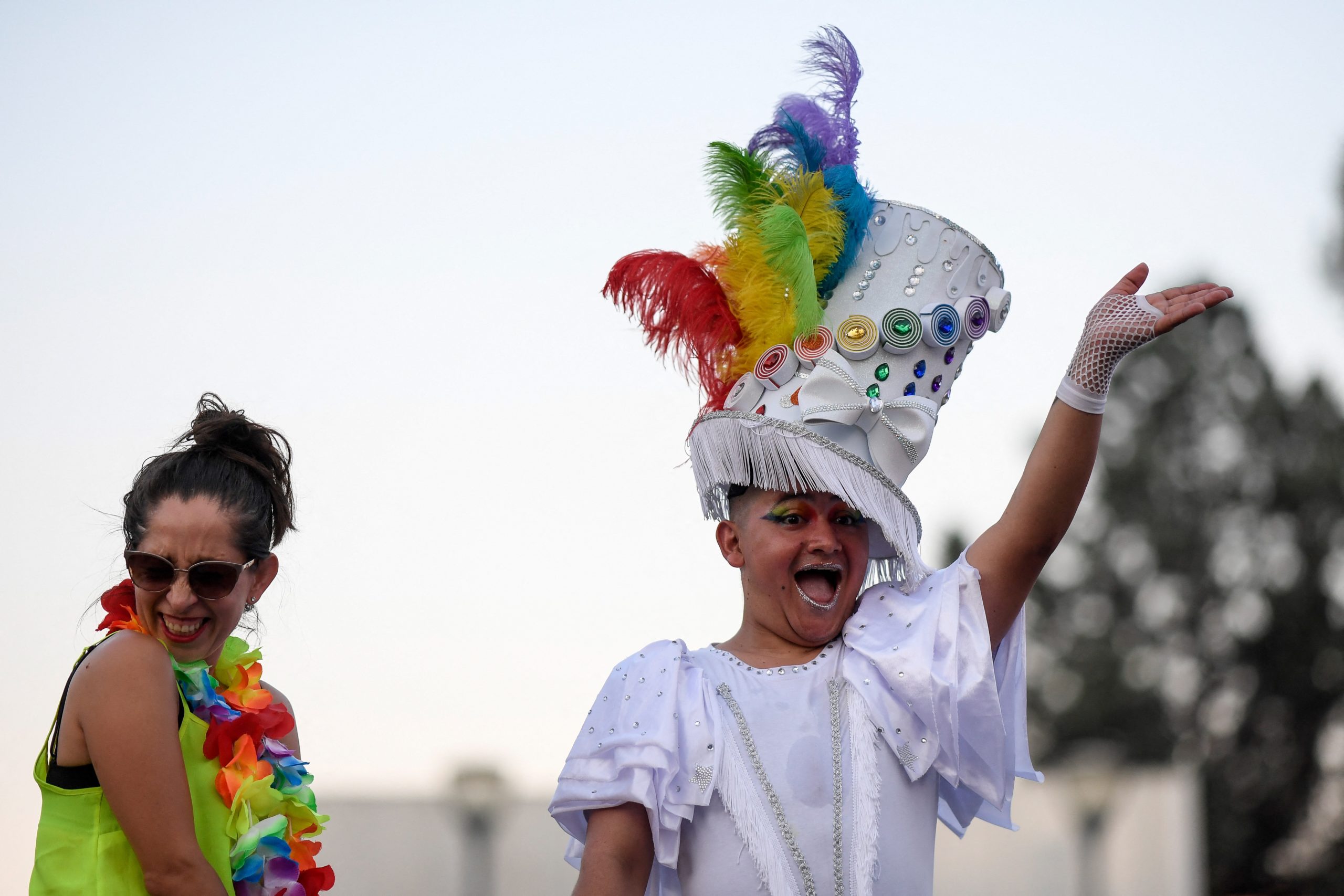 “I missed this a lot, the atmosphere is great. You can see that people really wanted to party after so long without a ‘normal’ Pride,” said Victor Romero Fernandez, a 38-year-old teacher. 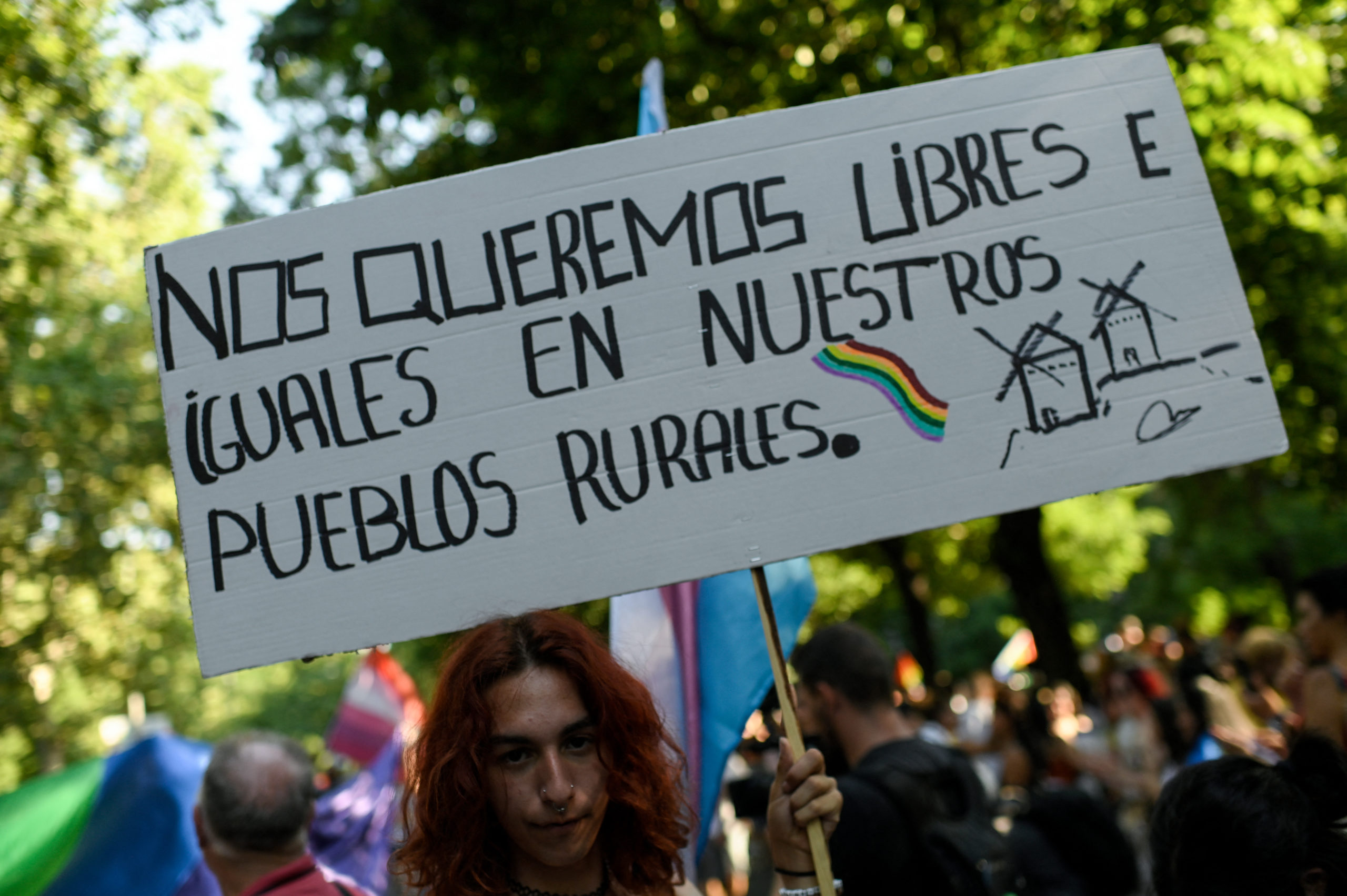 A participant poses for pictures holding a sign reading “we want to be free and equal in our rural towns” during the “Marcha del Orgullo” Pride march in Madrid, on July 9, 2022.  (Photo by OSCAR DEL POZO / AFP) 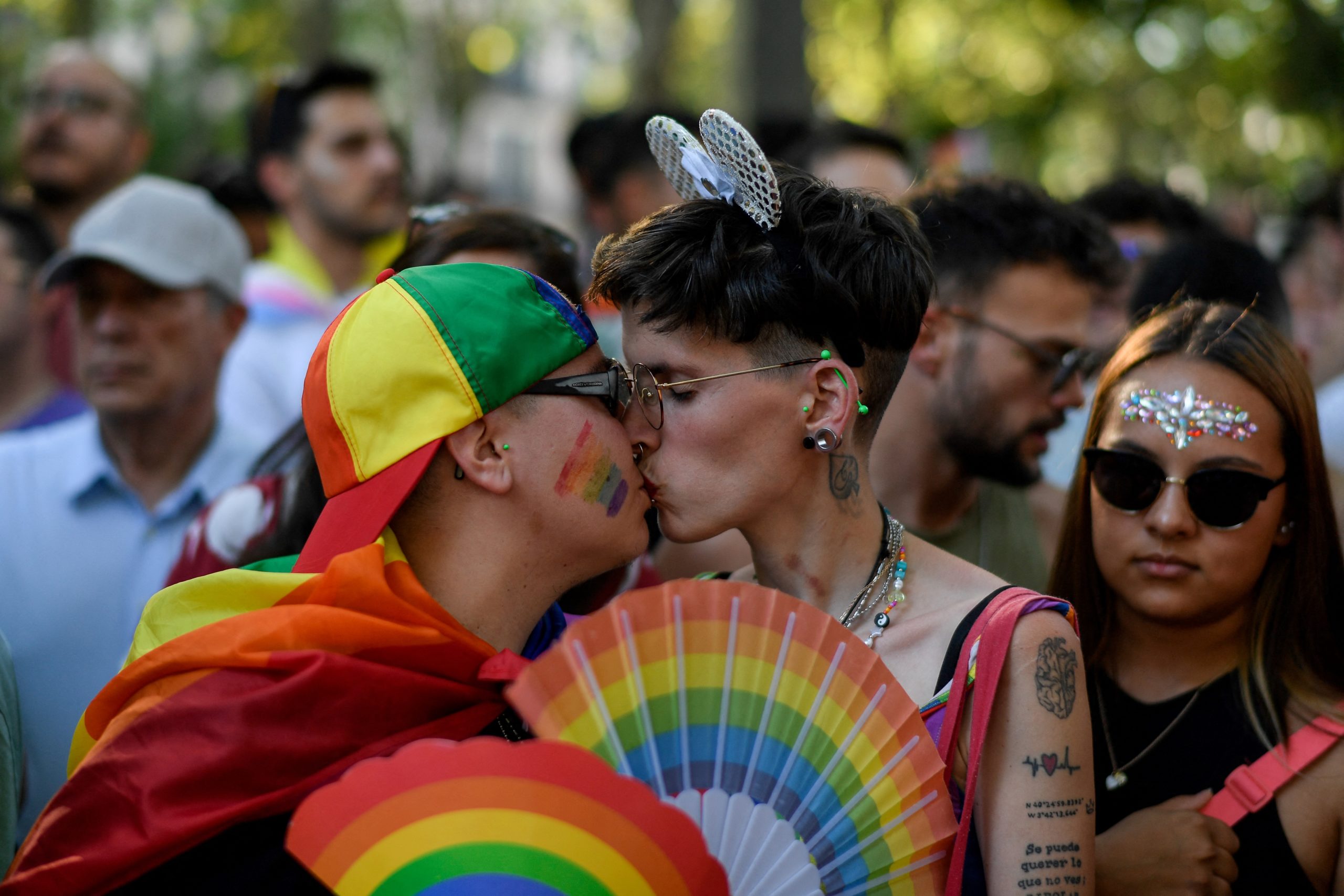 A couple kiss during the Pride march, the highlight of Pride week.  (Photo by OSCAR DEL POZO / AFP)

“It has become a big party, with floats converted into discos and multinationals… it’s a big business,” he said.

Homosexuality was decriminalised in Spain in 1978, three years after the death of dictator Francisco Franco. The country has since legalised marriage and adoption for same-sex couples. 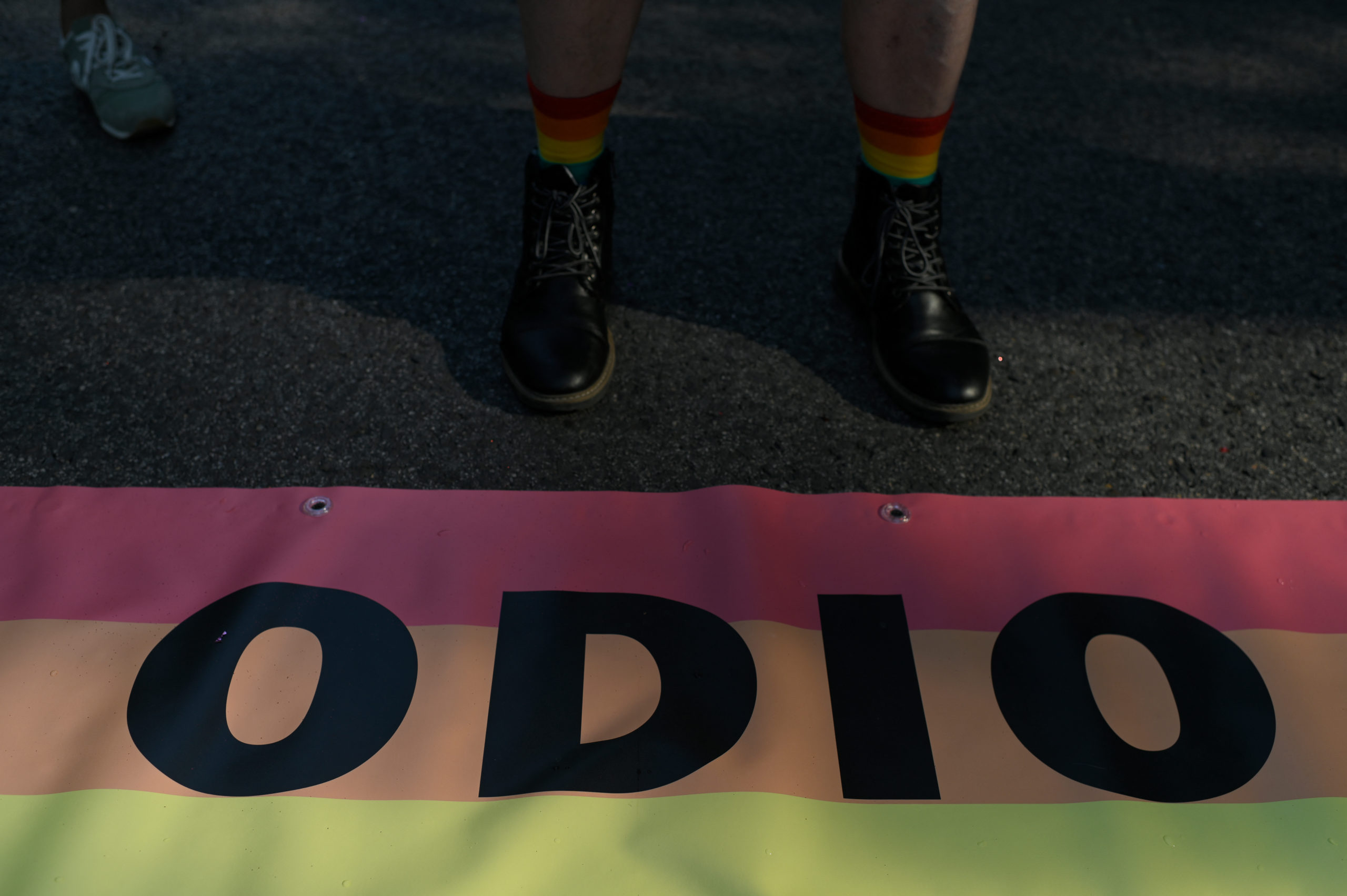 A participant stands next to a rainbow flag reading “Hatred” during the “Marcha del Orgullo” Pride parade in Madrid. (Photo by OSCAR DEL POZO / AFP)

But the national LGBTQ federation, FELGTBI+, said it was important to give “visibility” to the community, denouncing a growing “hate speech” in a statement before the march.

FELGTBI+ added that such discourse was “undermining the foundations of social harmony, putting at risk the gains achieved up to now”. 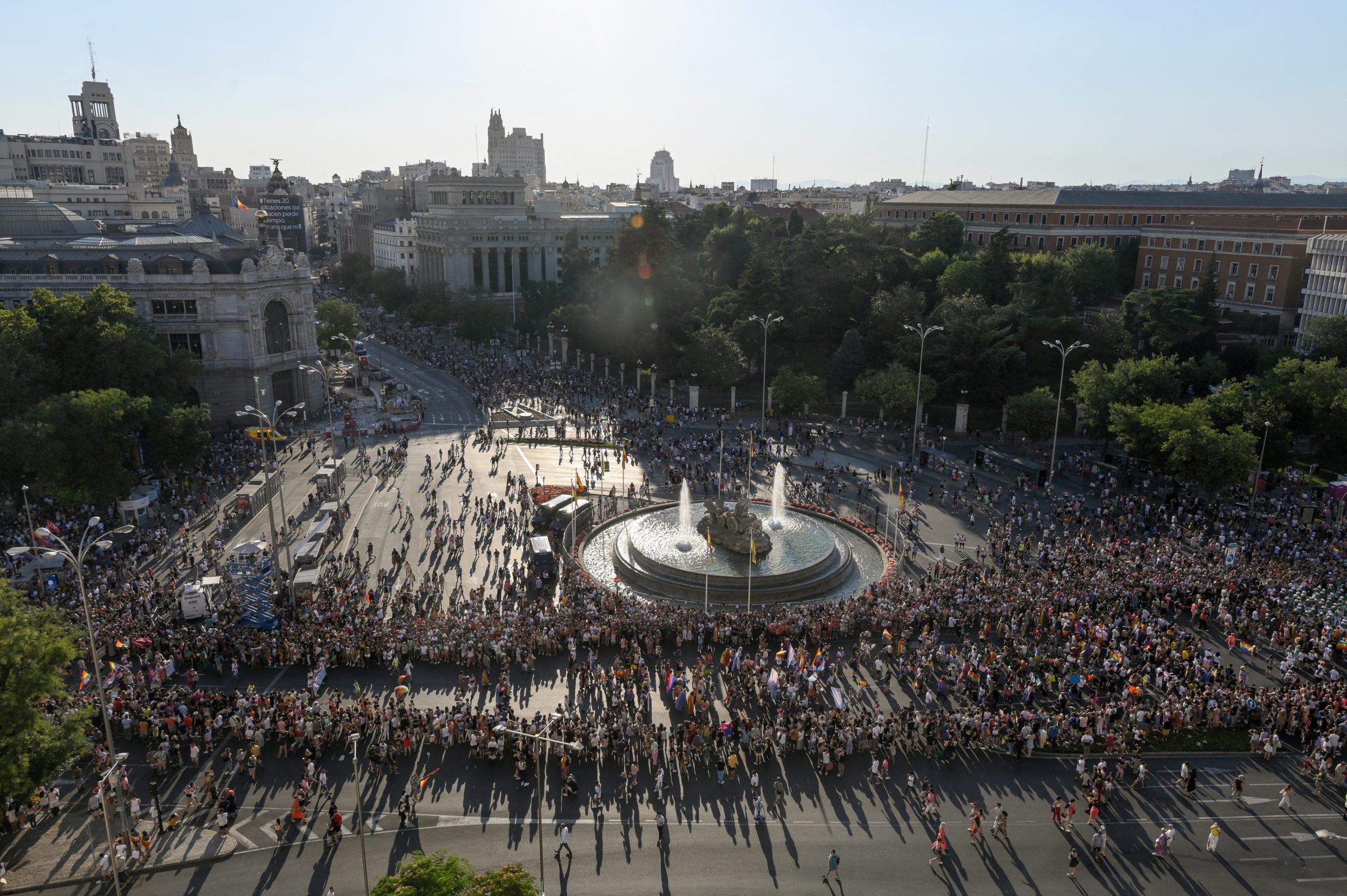 The federation also supported a draft law, to be debated in parliament this summer, that would allow someone to change their name and gender on identity documents at their request from the age of 16.

If adopted, the legislation would make Spain one of few countries to allow self-determination of gender.

“The aim is to clear up any doubts about the origins and the context that brought about the entry (of an artwork) into the Prado’s collection,” said a statement from the museum.

If the law allowed, they would be returned to their legitimate owners, it added.

The Madrid-based museum had on Tuesday released a list of 25 works that “originated from seizures during the (1936-39) civil war”, publishing images of 22 of the paintings on its website.

By Thursday, the number of artworks confirmed as seizures rose to 62, most of them paintings.

Among the works are paintings by 17th-century Flemish artist Jan Brueghel the Younger, French painter Francois Boucher and impressionist-inspired Spanish artist Joaquin Sorolla, according to the list.

Most of the works were being held in storage, although five of them — one by Sorolla — have been on display at public museums in Girona, Granada and Malaga, RTVE public television said.

“The quality of the works is very diverse, there are some by well-known masters like Joaquín Sorolla, but also anonymous paintings whose ownership will probably never be known,” Andrés Ubeda, the Prado’s head of conservation and investigation, told public television on Wednesday.

Investigators will now try and establish why these works were seized, he said, indicating it was the first step in what would likely be a long process aimed at restoring the artworks to the families of the original owners.

“The seizures carried out by Franco’s government were aimed at taking away the legitimate possessions of their wartime enemies,” he said.

The Prado said it had set up a team to probe the provenance of works in its collection. It will publish its report in January.

“The Prado Museum has decided to formally open an investigation into the possibility that some of the works in its collection may have come from seizures during the civil war or during the Franco dictatorship,” which ended in 1975, it said on Tuesday.

All 25 works initially identified were “deposited in (the museum’s) collection by the Commission for the Defence of Artistic Heritage” set up by Francisco Franco during the civil war, the statement added.

Seventeen of those paintings were given to the museum between 1940-1942, while another six were initially transferred to Madrid’s Museo de Arte Moderno in 1942-43 and later acquired by the Prado, it said.