Ebba Busch, leader of Sweden’s Christian Democrat party, called a press conference on Monday in which she presented a document that she called “an abortion contract”, which was essentially a pledge to safeguard the right of women in Sweden to have an abortion.

“There is room for signatures from all eight party leaders,” she said. “I have already signed on behalf of the Christian Democrats.”

What does the so-called “abortion contract” say?

The document itself is fairly uncontroversial.

It states simply that Sweden’s law on abortion dates back to 1974, and that it grants women the right to an abortion up until the 18th week of pregnancy, with women seeking abortions later in their pregnancy required to get permission from the National Board of Health and Welfare.

“Those of us who have signed this document support Sweden’s abortion legislation and promise to defend it if it comes under attack from forces both within our country and from outside,” the document reads.

Why have the Christian Democrats produced it?

The decision of the US Supreme Court to overturn Roe vs Wade, and so allow US states to ban abortion has aroused strong feelings in Sweden, as elsewhere, and Busch is seeking to send a strong signal to distance her own Christian party from the US religious right.

Abortion has been a recurring issue within the Christian Democrats with several politicians and party members critical of abortion.

Lars Adaktusson, a Christian Democrat MP, was found by the Dagens Nyheter newspaper to have voted against abortion 22 times when he was a member of the European parliament.

The party has also in the past campaigned for the right of midwives and other medical professionals who are ethically opposed to abortion not to have to take part in the procedure.

So why aren’t all the other party leaders signing the document?

Sweden’s governing Social Democrats, and their Green Party allies, dismissed the contract as a political gimmick designed to help the Christian Democrats distance themselves from elements of their own party critical of abortion.

“It would perhaps be good if Ebba Busch did some homework within her own party to check that there’s 100 percent support for Sweden’s abortion legislation,” Magdalena Andersson, Sweden’s prime minister, said. “That feels like a more important measure than writing contracts between party leaders and trying to solve it that way.”

In a debate on Swedish television, Green Party leader Märta Stenevi argued that it would be much more significant if Busch’s own MPs and MEPs all signed the document.

It wasn’t other party leaders who needed to show commitment to abortion legislation, but “her own MPs, MEPs, and not least her proposed government partners in the Sweden Democrats and even some within the Moderate Party”.

She said it made her “very very worried” to see that the Christian Democrats needed such a contract. “That’s why I see all this more as a clear sign that we need to move forward with protecting the right to abortion in the constitution,” she said.

How have the other right-wing parties reacted?

The other right-wing parties have largely backed Busch, although it’s unclear if any other party leaders are willing to actually sign the document.

Tobias Billström, the Moderates’ group parliamentary leader, retweeted a tweet from Johan Paccamonti, a Stockholm regional politician with the Moderate Party, which criticised the Social Democrats for not signing it, however.

“It seems to be more important to blow up a pretend conflict than to sign the Christian Democrats’ contract or look at the issue of [including abortion rights in] the constitution, like the Moderates, Liberals and Centre Party want to,” Paccamonti wrote.

The Liberal Party on Sunday proposed protecting abortion rights in the Swedish constitution, a proposal which has since been backed by the Moderate party and the Centre Party. 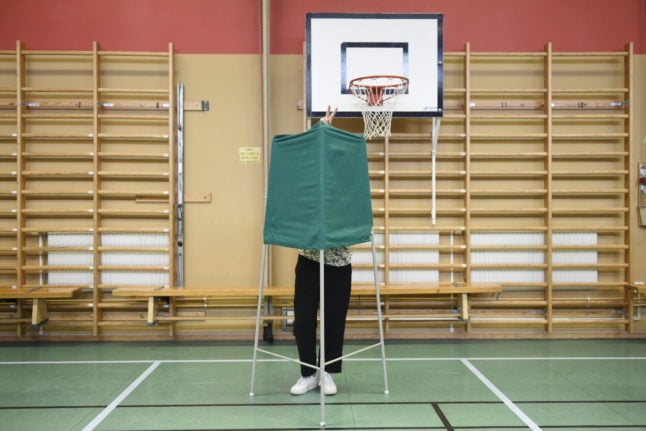 We’ll start with Sweden’s four largest parties: the left-wing Social Democrats and the conservative Moderates, the far-right Sweden Democrats and the Centre Party, who, as you probably guessed, are in the centre of the political spectrum.

The leader of one of Sweden’s two largest parties – Magdalena Andersson for the Social Democrats and Ulf Kristersson for the Moderates – is likely to become prime minister after September’s election, depending on how well each party does, as well as how many votes the other parties in their blocs receive. 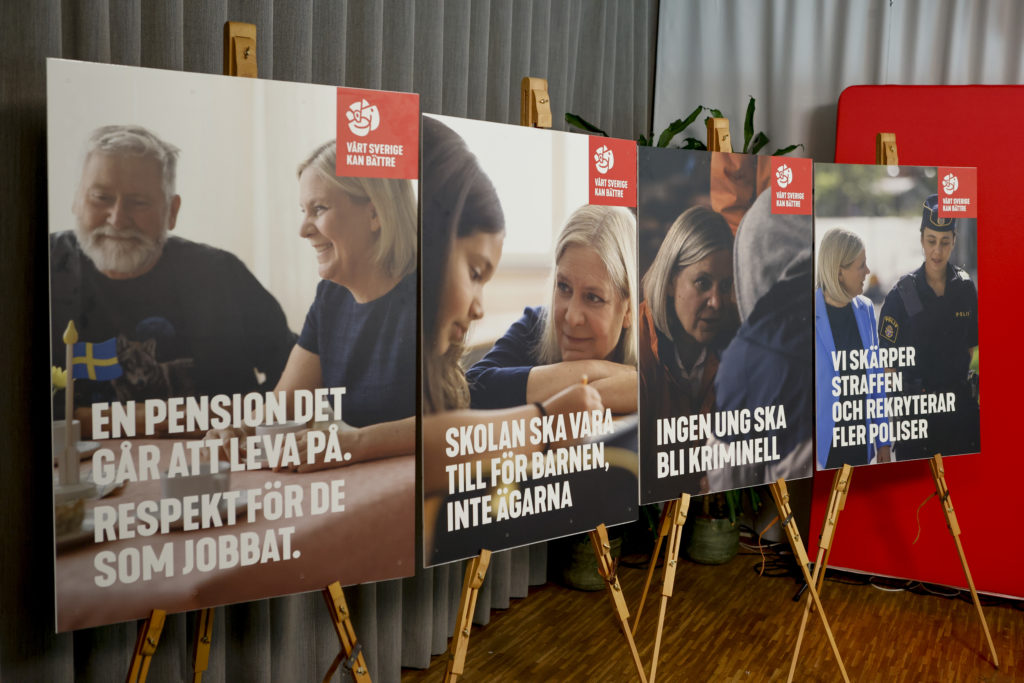 The Social Democrats focus on six different policy areas on their website, which, interestingly, don’t correspond entirely with their election campaign posters unveiled in early August.

On their website, however, the ruling Social Democrats highlight different issues: welfare, healthcare, elderly care, labour, the climate and law and order.

Some key issues highlighted in their campaign are more police officers, stricter punishments for criminals, better pensions and limiting profits for free schools. They also state that “everyone who can work, should work”, adding that those who work should be able to live off their salary and have good working conditions.

Some of their labour policies include creating more jobs across Sweden, including in the healthcare sector in order to shorten queues for accessing healthcare, providing better opportunities for the unemployed to retrain and introducing the family week policy they were previously unable to pass through parliament. 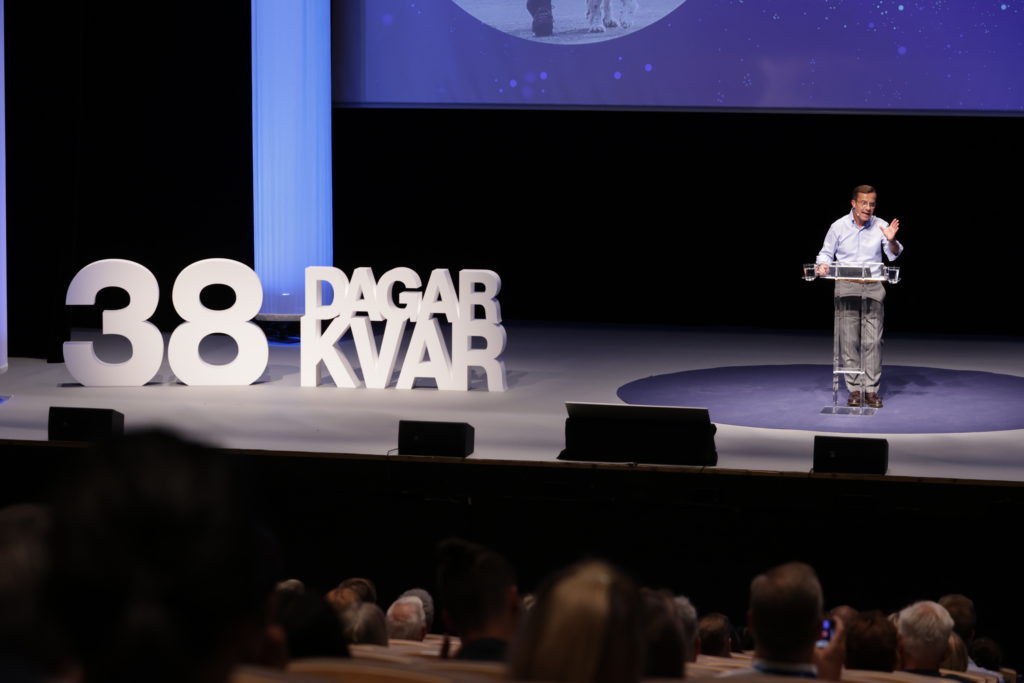 The Moderates’ main policy focus areas in their campaign, according to their website are crime, the economy and jobs, as well as energy and the climate.

The conservative opposition party’s policies criticise the reigning Social Democrats, pointing out issues it has identified as being important for voters. It does not, however, propose a set of policies to tackle these issues.

The Moderates mention the high level of shootings in Sweden (“one shooting a day, one fatal shooting a week”), mugging, fraud against the elderly and women’s “insecurity outdoors” as important election issues this year.

They also focus on the economy and “planboksfrågor”, or literally “wallet issues”, like cost of living and personal economy issues, stating that “after eight years with the Social Democrats in government, we have the EU’s lowest growth … and eighth-highest unemployment”, as well as stating that “700,000 people who have migrated to Sweden can’t support themselves financially, costing 132 billion kronor per year”.

On energy and climate, they state that energy prices have broken new records this summer, with the situation “expected to get even harder in autumn and winter”, as well as stating that “Sweden has burnt oil in the middle of summer”.

Their main argument as to why voters should vote for them is not a policy as such, rather the fact that they have “gathered four parties which agree on the political issues which are most important for voters”.

They list eleven points these four parties – the Moderates, the Christian Democrats, the Sweden Democrats and the Liberals – agree on.

Some of these points tackle specific law and order issues, such as introducing double sentences for gang criminals and imprisoning young people who carry out “humiliation robberies” – robberies where the perpetrator humiliates their victim.

Other points tackle money issues, like “work should pay” and less red tape for owners of small businesses, as well as energy and climate issues, such as lower fuel prices and more nuclear power to provide “cheaper and greener electricity”.

Finally, some points tackle integration and migration: “tightened immigration for integration to succeed”, and “no to forced bussing of students”, a policy which does not currently exist and has not been proposed, where students would be bussed from areas with a high immigrant population to areas with a lower level of immigrants, in order to aid integration. 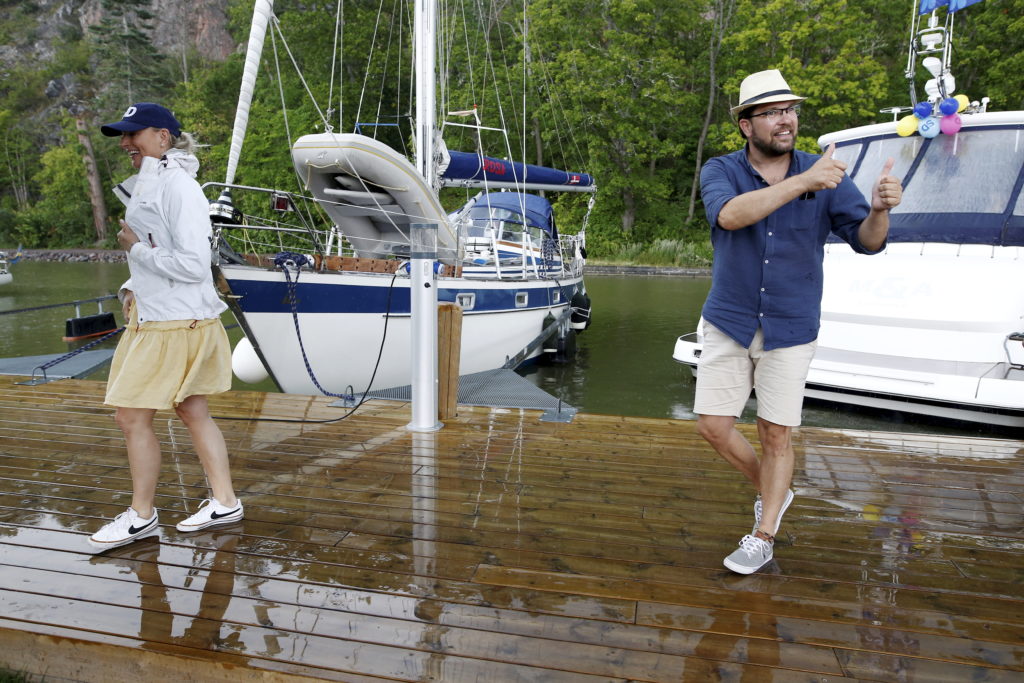 Their election campaign is also markedly negative, describing the country as “a divided Sweden where gangs have been allowed to grow, exclusion has taken root and the cost of living for people has drastically increased”.

They argue that “those who created this society”, which they state is a product of “decades of social liberal politics”, are incompetent when it comes to solving the problems it faces.

Their main argument for voting for them in September is to “create a cohesive Sweden where people can feel secure, a sense of community and have a good standard of living”, as well as stating that the Sweden Democrats are “the party which warned of these developments in society and saw it coming”.

On migration, they state that “mass migration to Sweden from illegal immigrants, economic migrants and asylum seekers has changed Sweden for the worse and has caused many societal problems that we now need to fix”.

To do this, the Sweden Democrats want to stop all refugees from countries which “are not close to us” and tighten migration policy to the “strictest possible level according to EU law”. They also want the number of migrants who do not have the right to be in Sweden leaving to be higher than the number of migrants arriving in Sweden.

On welfare, they accuse the Social Democrats of “letting Sweden’s welfare fall into ruin”, stating that they will solve the issue by “financing large-scale investments through lowering aid and a sustainable migration policy”. They further state that Sweden’s welfare “should not be available for the whole world’s population” and that it should only be fully available to Swedish citizens and those who contribute to the welfare state.

On security, they state that there needs to be more police with better working conditions. They also want to increase sentences for criminals.

On fuel, the Sweden Democrats are critical of higher fuel taxes, suggesting that they would lower tax on fuel if elected. 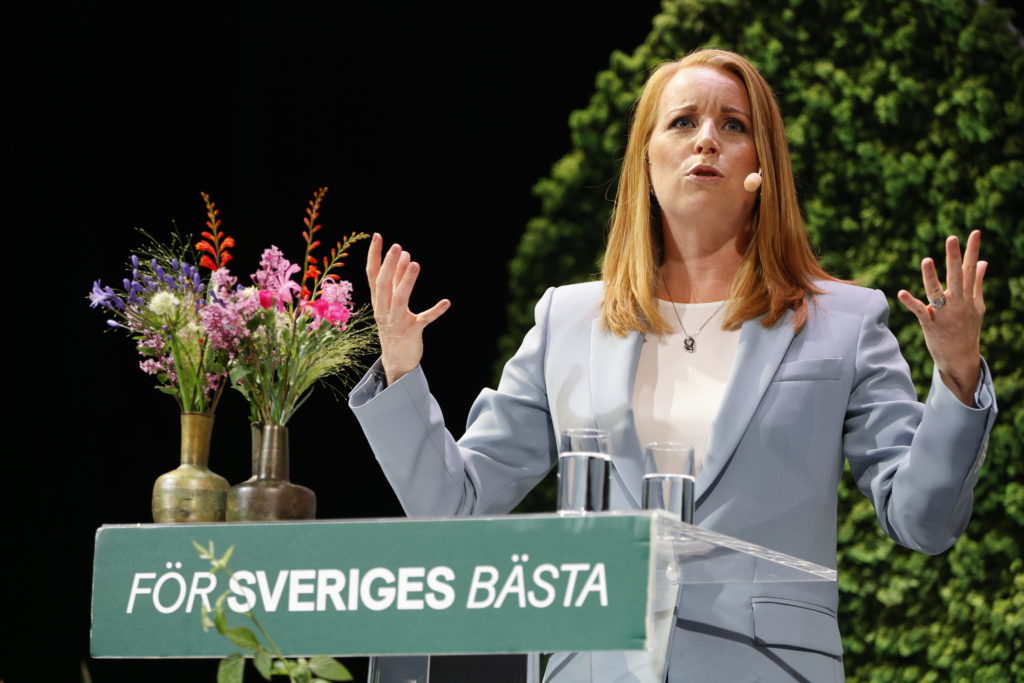 The Centre Party’s election manifesto focuses on a number of priorities: “how the whole country should live, how we can save the environment and the climate, create an equal Sweden, increase the potential of small businesses and strengthen the economy, improve healthcare, protect liberal democracy and strengthen the social contract”.

It also makes a point of the fact that it is Sweden’s only conservative or borgerlig party which refuses to work with the Sweden Democrats, describing them as a “xenophobic party with authoritarian leaders as its role models”.

In terms of climate, the Centre Party states that Sweden must “take advantage of the possibilities of technology and the innovative power of companies to overcome the climate threat”. The Centre Party also wants “increased freedom, security and accessibility” across Sweden, and it wants to “increase women’s security and independence” through preventative measures against male violence against women.

On the economy and small businesses, it wants lower tax and less red tape, and more stability in state finances.

On law and order, it calls for a better prepared totalförsvar or “total defence”, Sweden’s defence tactic in which the entire country must be prepared to defend in the case of an attack, as well as preventative measures to tackle crime.

Finally, the Centre Party calls for, unsurprisingly, central politics. Green, liberal politics and a fight against division and polarisation. “Sweden does not need xenophobic right-wing nationalism or socialist left-wing politics,” it says.

On Monday we will continue our appraisal of party election pledges, looking at the pledges of the Christian Democrats, Left Party, Liberal Party, and Green Party.