The number of asylum seekers and displaced people crossing into Austria has increased since earlier this year. (Photo by ALEX HALADA / AFP)

The bodies of the two men were discovered last October when Austrian authorities stopped and searched a van at the border with Hungary.

Thirty people in total were crammed in the vehicle, whose driver fled the scene but was later arrested in Latvia and extradited.

He said he would accept the verdict, but the prosecution can still appeal it, APA said.

A court spokeswoman could not immediately be reached by AFP.

Austria’s interior ministry announced in May that police had smashed a group believed to have smuggled tens of thousands of mostly Syrians, including the two found suffocated, from Hungary to Austria.

A total of 205 people suspected to be linked to the group have been arrested in central and eastern Europe, the ministry said.

Those smuggled, including children, were trying to reach western European countries, including Germany and France.

The October discovery of the dead men recalled a dire event in August 2015 when 71 people from Syria, Iraq and Afghanistan suffocated in the back of an air-tight van where they had been hidden by people smugglers.

The bodies, including those of three children and a baby, were discovered in Austria but they had died while still on the other side of the border.

The emotion aroused by that tragedy triggered a brief opening of the borders to hundreds of thousands of people wishing to reach Western Europe.

But Austria and other European countries have since fortified borders to stop people smuggling. 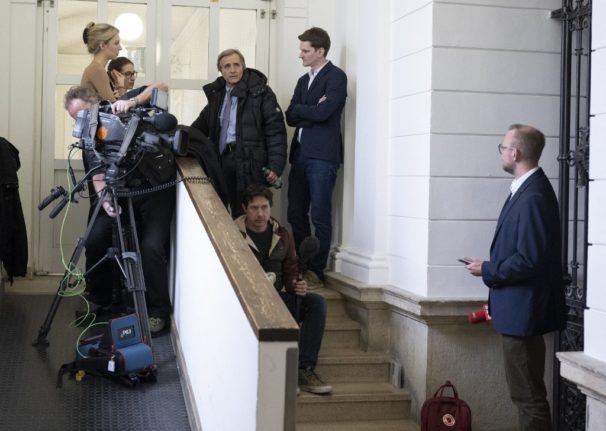 Two years later, six defendants — four Austrians, a Chechen and a Kosovar — stood trial for helping Fejzulai prepare for the shooting, even though they were not directly involved in the deadly attack.

After the jury deliberated for about a dozen hours, the verdicts were pronounced around midnight by the presiding judge.

One man was sentenced to life in prison for “contributing to murder” and another was given the same sentence for participating in terrorist crimes in connection with murder — the trial’s main charge.

Another two men facing the main charge were given prison terms of 19 and 20 years respectively, while the final two of the group were acquitted of it.

But they were found guilty of membership in a terrorist organisation and each was sentenced to a conditional prison term of two years.

To hear the verdicts, the men were led into the crowded courtroom, escorted by armed guards under tight security. Cameras were barred from the room. They remained unfazed upon hearing their sentences.

Throughout the trial their lawyers argued they had barely known Fejzulai and had been unaware of what he intended to do — portraying the evidence as circumstantial, inconclusive or lacking altogether.

The prosecution demanded the maximum penalties for all defendants, stating that evidence painted an unambiguous and very clear picture of the men’s involvement, adding that “such insidious attacks on our values and democracy” would warrant them.

With the help of some of the accused, the gunman — an Austrian citizen whose parents are from North Macedonia — was allegedly able to obtain the weapons and the ammunition needed for the attack, while others provided logistical aid or encouraged Fejzulai.

In 2019, Fejzulai had been convicted and sentenced to 22 months in prison for trying to join the Islamic State group in Syria, before being arrested in Turkey and extradited to Austria.

In the wake of the EU member’s deadliest shooting in decades, the Austrian government and its intelligence service were accused of failing to monitor the Islamist movement in the country.

As a result, Austria adopted a heavily criticised anti-terror law in 2021 that allows for increased surveillance.