A basket of groceries sits on the conveyor belt at a supermarket in Leipzig. Photo: picture alliance/dpa | Hendrik Schmidt

Speaking to Tagesschau on Friday, Özdemir said he believed that food prices hadn’t yet peaked in the wake of the Ukraine war and escalating energy crisis.

While inflation in Germany is currently at a record 7.9 percent, the cost of food products is going up at a much faster rate than many other consumer goods. In May, the price of food was on average 11.1 percent higher than it was in May last year.

As the cost of living becomes increasingly unmanageable for low-income households, Özdemir is calling for VAT on basic food items to be temporarily abolished.

“I think that would be good,” he told Tagesschau, adding that he thought the measure would also contribute to healthy eating.

The debate on cutting or abolishing VAT on food has been gaining ground in recent weeks, with an increasing number of organisations coming out in support of the move.

The German Social Welfare Association (VdK), the Federation of German Consumer Organisations (vzbv) and the German Diabetes Association have argued that VAT on general food items should be slashed or abolished during the crisis.

But the Green Party politician was sceptical about the chances of success, telling Tagesspiegel that he doubted he could find a majority in the coalition government in favour of the move.

One of the reasons for the disproportion hikes in food prices is the increasing cost burdens faced by farmers for things like energy and fertilisers.

To attempt to counteract this, the Bundestag has laid the groundwork for an €180 million aid package for agriculture business.

By the end of September, farmers and other agriculture businesses will each be able to claim €15,000 in state aid. One third of the money will be provided by the EU, the rest by the federal government

The other major issue is the supply of grain from the Ukraine.

Since Russia’s full-scale invasion began back in February, it has been impossible for ships to safely transport grain from the Black Sea ports to Europe and the rest of the world. This has had an impact on the price of products like pasta, bread and flour.

The question of how one of the world’s largest grain exporters can continue to trade is a major theme of the Global Food Security conference, which is taking place in Berlin on Friday.

Özdemir said that “lasting and efficient alternatives” were needed to ensure that grain exports could continue. 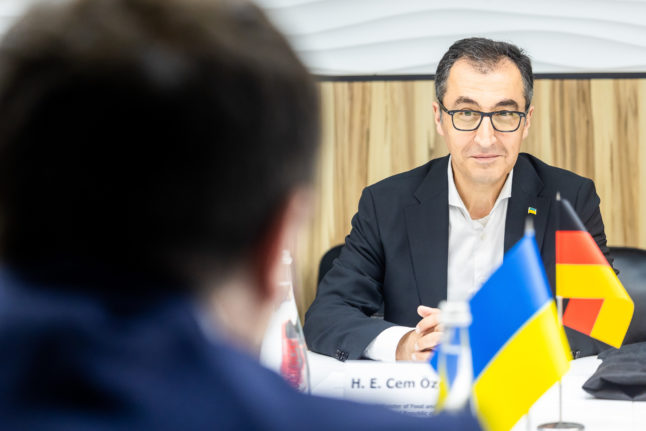 As long as Russia acts as a “permanent aggressor”, “Ukraine cannot rely on being able to transport its grain safely across the Black Sea, even in the event of peace”, the minister warned.

He suggested that a broad-gauge railway between the Ukraine and the Baltic Ports or trade routes along the Danube could be viable options.

For EU countries, Özdemir also suggested that rules around crop rotation could be waived this year, which would enable countries to repeatedly cultivate wheat.

According to calculations, this would allow “up to 3.4 million tonnes of additional wheat to be produced in Germany alone”, Özdemir said.

READ ALSO: When will Germany’s rising cost of living slow down?

The SPD’s Hanover branch said Schröder, whose party membership falls under its umbrella, was “not guilty of a violation of the party rules, as no violation can be proven against him”.

The branch had opened a hearing in July to discuss 17 motions from local and regional chapters against Schroeder’s ongoing membership of the party.

The decision can be appealed, but legal experts say there are high hurdles for expelling members.

Schröder, chancellor from 1998 to 2005, has refused to turn his back on Putin despite Russia’s invasion of Ukraine.

His stance has made him an embarrassment to the SPD, which is also the party of Chancellor Olaf Scholz.

He has also been widely criticised for holding a number of lucrative posts at Russian energy giants, and it was only after much public pressure that Schröder in May gave up his seat on the board of Russian energy group Rosneft.

He later also announced he would not be joining Gazprom’s supervisory board as initially planned.

Germany’s parliament in May removed some of the perks Schröder was entitled to as an elder statesman, stripping him of an office and staff.

Schröder, 78, who was Angela Merkel’s immediate predecessor, has remained defiant and met with Putin in Moscow in July.

In an interview after the visit, he claimed Russia wanted a “negotiated solution” to the war – comments branded as “disgusting” by Ukrainian
President Volodymyr Zelensky.

Schröder has also called on Berlin to reconsider its position on the Nord Stream 2 gas pipeline, which stands completed but was blocked by the German government in the run-up to the invasion of Ukraine.