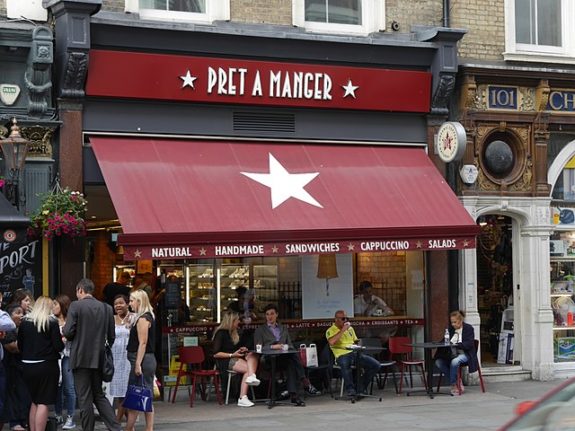 Pret A Manger is one of the UK’s most beloved café chains, with at least one located in almost every city – 373 of them to be exact.

It’s particularly known as the go-to lunch and coffee spot for office workers across the country, who simply refer to it as ‘Pret’ (pronouncing the ‘t’ at the end).

Now the sandwich and coffee shop will be arriving in Spain after closing an agreement with Grupo Ibersol.

The company plans to open 70 restaurants over the next 10 years, both in the main cities and large strategic commercial areas, as well as in transport hubs such as airports or train stations.

Pret A Manger specialises in healthy food such as filled baguettes, sandwiches, salads and soups, as well as pastries and coffees. They currently have branches in the UK, Belgium, France, Germany, Switzerland, Ireland, the US, Dubai, Hong Kong and Singapore, with more than 550 restaurants between them.

The arrival of Pret A Manager to Spain and Portugal will be the first adaptation of its model in southern Europe.

Grupo Ibersol has chosen Pret A Manger to take over from Burger King, which operates 159 restaurants in Spain and Portugal. Restaurant Brands Iberia confirmed the acquisition of these premises for a total of €250 million.

This shows a shift in Spain away from the traditional fast food of burgers and fries to healthier, equally quick alternatives.

For example Catalonia’s answer to Pret A Manger – Sandwichez – has opened six new branches in the last three years alone. And Honest Greens, a healthy bowl restaurant chain which has an almost entirely gluten-free menu with mostly vegan options, has opened up several branches across Madrid and Barcelona in the last few years.

“Pret A Manger is one of the great leaders in restaurants worldwide. Without a doubt, this new agreement is a great business opportunity for Grupo Ibersol, which will allow us to further strengthen our position in organised restaurants at a national level,” said the co-president of Ibersol, Alberto Teixeira.

“We are convinced that Pret A Manger will be very well received by Spanish and Portuguese consumers, as well as by the entire community of British tourists and those from other European countries who visit the Iberian Peninsula,” he continued.