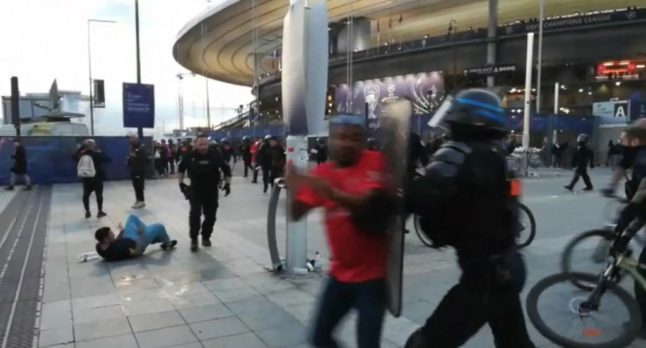 In 25 years in France, I’ve often found myself battling against the media tide to defend my adopted country from inaccurate criticism. What on earth can I say about events at the Stade de France in Saint-Denis during Saturday’s Champions League final?

Four days after the event the French government persists in blaming the principal victims – the supporters of Liverpool FC. Yes, there clearly were some fake tickets in circulation, maybe as many as 2,800, but nothing approaching the “mass, industrial fraud” alleged by the interior minister, Gérald Darmanin.

As a supporter of Manchester United for nearly 70 years, I’m programmed to regard Liverpool fans as the hereditary enemy. From what I can see, they behaved with exemplary patience and calm on Saturday, despite being penned into dangerously dense spaces by administrative incompetence; attacked by gangs of thugs from nearby estates; and casually tear-gassed by police who failed to guide or protect them.

Who is really to blame?

Darmanin says that it was the 30,000 to 40,000 extra Liverpool fans who turned up with false tickets or no ticket. French media investigations have proved in the last few days that there is a fantasy or a red-herring. In other words, a lie.

Darmanin also blames the fact that a rail strike closed one of the two RER stations that Liverpool fans could have used. He omits to mention that the police parked trucks under an autoroute underpass to narrow the already dangerously crowded remaining access to what is always a very awkward stadium for 80,000 people to reach.

I wasn’t in Saint-Denis for the European Champions League Final on Saturday. I have to rely on what may turn out to be partial or inaccurate accounts.

But the overwhelming weight of evidence suggests that the French police lost control of events; took decisions which made a dangerous situation worse; and then attacked some of innocent victims with tear gas, either accidentally or deliberately. Police leaders, in the shape of Interior Minister Darmanin and the Paris police prefect, Didier Lallement, then tried to cover up their failings by blaming the Liverpool fans.

The story of the Stade de France is many things but it is, at least partially, a story of deeply-ingrained police incompetence.

Sebastian Roché, of Science Po Grenoble, is one of the foremost academic experts on French policing.

He told Le Monde this week:  “French police are not expected to talk to the public. They are not trained to send information up the line to their superiors to change plans according to developments on the ground. They are poor at explaining to the public what they are doing and why.”

As a result, he said, French police tend to regard large crowds as single entities. If something goes wrong, if public order is threatened, the whole crowd is treated, or mistreated, in the same way. Hence the disturbing footage of French police officers casually resorting to pepper sprays and tear gas against peaceful Liverpool fans on Saturday night.

In other words, France’s police problem is a structural problem; it’s not just a question of occasional excesses or failings. This is the third time I have written about this issue in this column in the space of three years. Nothing much seems to change.

The former interior minister, Christophe Castaner, was forced out of that job in 2020 for several reasons. One of them was that he had lost the confidence of the police and gendarmerie. He was one of the few interior ministers in my time in France to dare to criticise the police publicly.

His successor, Gérald Darmanin, never makes that mistake. Hence in part, I believe, his unjustified criticism of Liverpool fans.

Unlike in Britain or Germany, the French police and gendarmeries are national forces under national, political control.

They regard themselves, and are regarded by others, as protectors of the state and the government in power, rather than as servants of the people. Sebastian Roché says that they are “wired to be insulated from society and to respond only to the executive”.

France does have a problem with public order. Politics goes rapidly to the street. Successive French presidents and governments know that they need the police to protect them. They have therefore tended to protect and flatter the police (but not always to fund or train them properly).

After a couple of serious police excesses in 2021,  President Macron instructed Darmanin to improve relations between police and public and to ensure that the French police were, in future, “irreproachable”.  A conference was called. Not much has been heard since.

On Saturday, France’s persistent policing problem was broadcast live to the world. The rugby world cup is in France next year and the Olympics are in Paris in 2024 – with the Stade de France in Saint-Denis as the main stadium.

It is time for the French government to stop protecting the police. It is, after all, the police who are supposed to protect us.

The Local subscribers in France are no doubt, responsible and law-abiding people – but, even so, it is very possible that they will find themselves in situations that involve contact with the police.

One reason for police to stop an ordinary civilian is for a contrôle d’identité (identity check). This is when a police officer stops to check your identity.

This can only happen under certain conditions:

If you’re driving, officers have the power to pull you over for an identity check – even if you were driving safely and within the speed limit – and a search of the vehicle and/or luggage may be carried out.

If you are not carrying any document that could prove your identity, the officer can take you to a police station to check your identity there. If this happens, the verification process must not last longer than four hours from the first request for ID – in Mayotte, this period is eight hours.

If you maintain your refusal to be identified, or if there is no other means of establishing your identity, the public prosecutor or the investigating judge may authorise the taking of fingerprints and photos.

Refusing to submit to fingerprinting or having a photograph taken is punishable by a fine of up to €3,750 and three months in prison.

Activists and NGOs argue that police practice racial profiling when they perform ID checks and it’s true that these ‘random’ checks seem to happen more frequently to people of colour.

READ ALSO What to do if you are arrested in France

READ ALSO EXPLAINED: What are your legal rights as a foreigner in France?

In France, it is strongly recommended that you carry some form of ID at all times, just in case you are stopped by officials. In fact, no text obliges you to have an identity card but if you are subject to an identity check, the procedure will take longer if you cannot present an appropriate document.

French citizens have ID cards, but if you’re not French then a passport or residency card such as a carte de séjour are the most usual ways to prove ID.

Equally, you may be required to prove your identity for any number of administrative reasons – which makes it easier to have some form of ID with you.

These include, for example, the following situations: