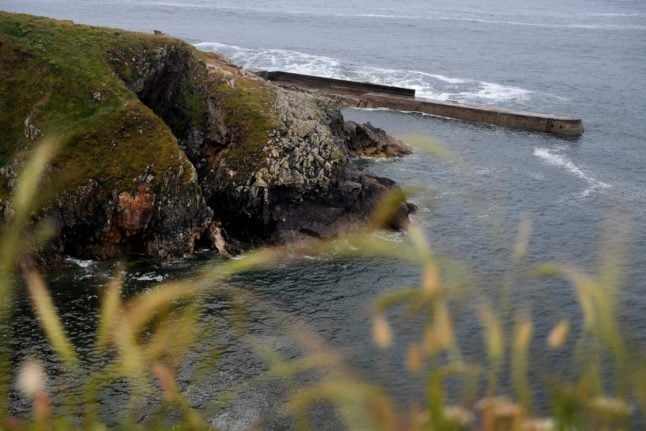 The family were fishing in the Plogoff area of Brittany, northern France. Photo by FRED TANNEAU / AFP

The 55-year-old father and 33-year-old mother were pulled out of the water early Thursday evening in the western town of Plogoff in cardiac arrest but rescuers were unable to resuscitate them.

The body of the 12-year-old child was found later in the evening.

Three other children of the family, aged 13 to 15, were not on the dyke and survived the surprise wave but were in shock and being treated by psychological services.

There were strong waves at the time but the weather conditions were not stormy, a spokesperson for maritime officials said.

Witnesses immediately called rescuers who dispatched paramedics and three helicopters to search for the victims, who lived in the nearby town of Audierne.

“There are circumstances that make the coast dangerous around here. I’m warning people, you have to be extremely careful,” Plogoff Mayor Joel Yvenou told the local Telegramme newspaper.

“It’s terrible, the season hasn’t begun yet and there are already victims,” he added.

The police préfecture in Paris has released an announcement warning tourists about a scam that might be used to target them especially.

The scam involves young boys and girls asking people to sign their petitions and requesting that they give a donation. In reality, many people – especially tourists or those unfamiliar with the local area – find themselves giving their money away to a false organisation.

In other cases, the petition acts as a distraction while pickpockets target the visitors.

Frequently, these scams involve the young people feigning deafness or the inability to speak, and pretending to collect funds on behalf of NGO for the hard of hearing.

The scam is just one of a number that criminals use to prey on tourists, and visitors return to Paris after a two-year break, police are warning people to be vigilant – especially in tourist hotspots such as Montmartre and the Eiffel Tower area or in transport interchanges such as Gare du Nord.

READ MORE: Warning: 6 of the most common scams in France to watch out for

For more advice on how to stay safe in Paris as a tourist, you can read the police “Guide for Staying Safe in Paris“