Italian rail services will be affected for a period of 24 hours, from 9pm on Thursday to 9pm on Friday. Photo by Geoffrey VAN DER HASSELT / AFP.

Had Audrey Hepburn and Gregory Peck hopped on an electric scooter rather than a Vespa in the classic film “Roman Holiday”, their spin around the Eternal City might have ended in tears.

The number of crashes and near-misses involving the two-wheelers has prompted Rome authorities to impose some order on a booming rental market that began two years ago.

The havoc came to a head earlier this month when two US tourists attempted a night-time drive down the Spanish Steps, causing over 25,000 euros ($26,300) worth of damage to the 18th century monument.

Caught on security footage, the couple in their late 20s were fined 400 euros each.

For now, it’s remarkably easy — requiring just a cell phone app — to hire one of the 14,500 scooters currently available in Rome, provided by seven licensed companies.

They’re cheap too, costing just one euro to unlock the scooters and between 15 to 25 cents a minute after that.

And in the city known for its traffic jams and limited public transport, they appeal to everyone from commuters to tourists and teenagers, who often squeeze two at a time onto the narrow deck. 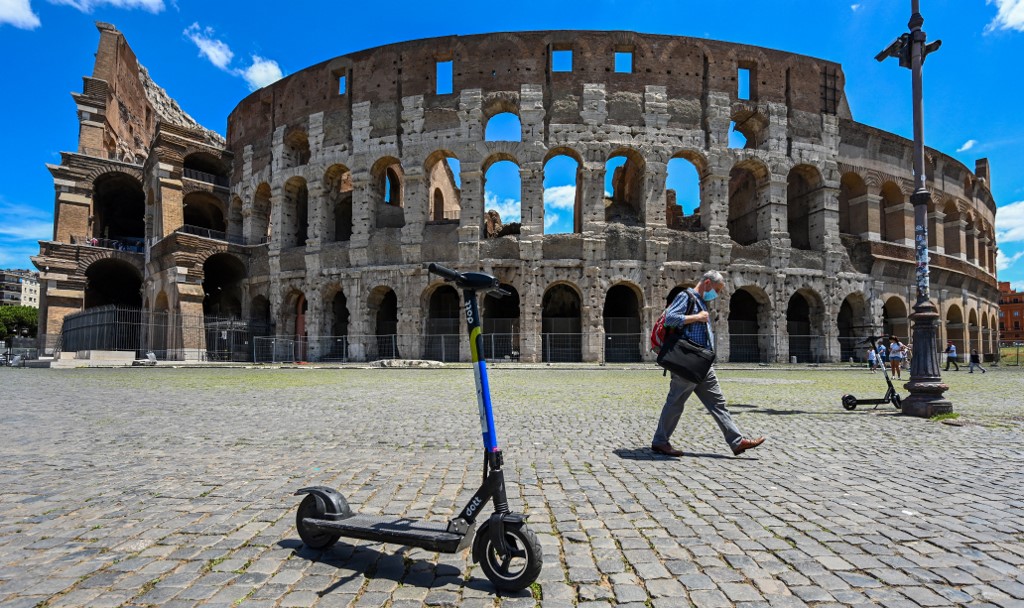 But there are challenges to navigating the cobbled streets of Rome’s cramped historic centre — where bike paths are virtually non-existent — leading some scooter drivers to weave dangerously around cars.

“They cut you off. They pass on the right, on the left, they get stuck in front of us and risk being crushed,” said Paolo Facioni, a 59-year-old bus driver.

Rented electric scooters have become a fixture in major cities around the world, from London to Paris and New York, part of a global move to diversify transport away from motor vehicles.

Tourists freewheeling around the bustling streets seem to “think they are in a video game!” he told AFP.

Figures on the number of scooter-related deaths and injuries show it is no such thing.

Seventeen people have been killed in Italy in the past two years in incidents involving electric scooters, according to consumer protection association Codacons.

Its chief Carlo Rienzi described Rome last month as “a Wild West, with scooters going where they shouldn’t, often with two people on board, breaking the speed limit”.

Rome police record an average of 15 accidents a month.

In light of the dangers, city hall is readying to tighten the rules, restricting use of the scooters to adults who must provide formal ID.

The number of operators will be limited to three and there will be restrictions on parking — a move anticipated by one US company, Bird, which recently announced its scooters in the city centre could only be left in designated areas.

Not all are happy with the proposed changes, however.

Twenty kilometres an hour “is too slow, we’ll be run over” by other vehicles, said 60-year old Mariano Giorgi, who uses a scooter every day to get to work — and is one of the few people to be spotted wearing a safety helmet while riding.

“I live in the centre and they are very useful, otherwise I would have to take the car which would pollute a lot more,” he said, as smog-belching traffic crawled around Piazza Venezia near the Colosseum.

“If it’s not practical, I won’t use it anymore.”