For the past two years, unvaccinated non-EU tourists have been unable to travel to Spain, with only exceptional reasons for travel allowed.  (Photo by JAIME REINA / AFP)

Spanish Tourism Minister Reyes Maroto on Thursday May 19th confirmed that it won’t be long before unvaccinated non-EU/Schengen nationals will be allowed to travel to Spain for non-essential reasons such as tourism, visiting friends or family or spending time in a second home in Spain.

“It’s a matter of days before we eliminate a restriction that could be discouraging tourists from outside the European Union from visiting us,” Reyes told Spanish radio station Onda Cero.

“And that is that we are going to stop requiring the vaccination certificate and allow them to enter with a negative test”.

Maroto then stated that this would have to be a PDIA test, which in Spain refers to both PCR and antigen tests. If it’s a negative PCR or similar test (NAAT-type test) it must have been issued less than 72 hours prior to arrival in Spain, or if it’s a negative antigen test, less than 24 hours before arriving in Spain.

Spain’s current Covid-19 travel restrictions only allow in third-country tourists such as Britons, Americans or Indians who have been fully vaccinated (including a booster shot if initial vaccination was more than nine months before travel) and those who have recovered from Covid-19 in the past six months.

But for practically the entirety of the pandemic, unvaccinated non-EU tourists have been unable to travel to Spain, with only exceptional reasons for travel allowed.

Reyes’ comments came about when asked by the Onda Cero interviewer when all of Spain’s Covid-19 travel restrictions will be lifted, as there are still other measures in places such as mask wearing on public transport (including planes) and proof of vaccination, testing or recovery.

“There’s a degree of safety with travel that we have to preserve. We’re still co-existing with the pandemic but that doesn’t mean that we haven’t been gradually lifting restrictions,” Maroto argued.

The minister spoke of allowing unvaccinated non-EU holidaymakers in soon as being another way of boosting the country’s recovering tourism industry, adding that her ministry was putting the finishing touches to the legislation, which will be approved in the coming days.

Other countries such as France and Italy, Spain’s competitors in the tourism stakes, have also already allowed unvaccinated third-country tourists in with proof of a negative Covid-19 test for more than a month now. 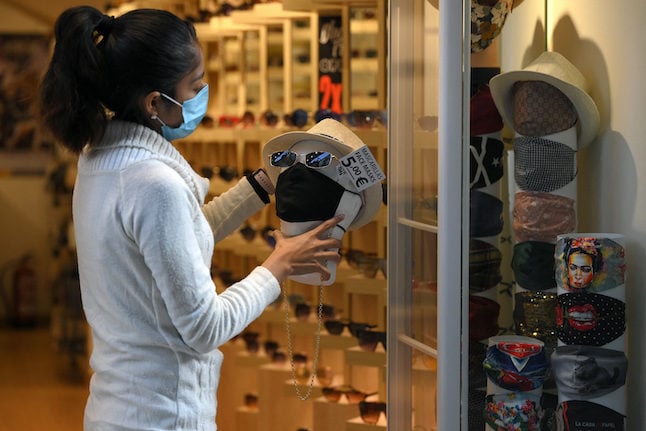 With Spain currently in the midst of an eighth Covid wave, face masks are currently only mandatory on public transport, in pharmacies, health centres and care homes, but could the Spanish government make them obligatory in all indoor public spaces once again?

For over two years, the use of face masks was required in indoor public spaces in Spain and for some of that time, they were required outdoors too.

Masks became an integral part of life in Spain, from serving to make political statements to becoming a fashion accessory. They changed the way Spaniards greeted each other and even caused psychological problems among young people who became scared of showing their faces in public.

For the past few months, aided by the government’s policy of treating Covid-19 like an endemic disease similar to the flu, and their decision to lift quarantine for mild and asymptomatic cases and ceasing to count all cases, many people have ended up assuming that the pandemic was over.

This was further fuelled by the return of mass events such as festivals and concerts. In Barcelona, the Primavera Sound music festival returned for the first time since the start of the pandemic but was marred by several high-profile bands having to cancel because of Covid-19 infections. Threads on social media also suggest that many festival-goers caught Covid-19 while at the event.

Spain is currently experiencing what the Spanish media have dubbed a new “silent Covid wave” as there are hardly any restrictions and no official figures on the true number of people who have become infected recently.

According to the latest data from Spain’s Ministry of Health, Covid-19 hospitalisations have increased by 21 percent in the last seven days (that’s among people aged 60 or older and serious cases) and the number in the ICU has shot up by 16 percent.

On Wednesday July 7th, ministry data showed that 11,586 were in hospital with Covid-19 in Spain and 502 were in the ICU.

As usual, each of Spain’s 17 regions has slightly differing opinions on the use of face masks, but the general consensus is that most of them are recommending wearing masks indoors once again, particularly for the vulnerable and the elderly.

Madrid’s Vice President Enrique Ossorio suggested that masks should be reintroduced in certain situations, due to the rise of cases seen in the region. Masks should be worn by “vulnerable people, those who are immunosuppressed and those who are pregnant,” he argued.

Ossorio also recommended that the use of face masks be extended to enclosed public spaces and large events.

Catalan Health Minister Josep Maria Argimon recommended that those recovering from Covid should continue to wear a mask due to the increase in Covid patients admitted to the ICU in the region, which has increased from 26 to 46 in the space of just three weeks.

The government of Valencia has issued an alert after Covid cases in the region more than doubled in the week leading up to July 4th and has also asked for the return of masks in indoor settings.

The president of the Valencia College of Nursing Laura Almudéver also recommended on Monday July 4th that people should return to wearing masks in indoor spaces, where a distance from others couldn’t be maintained.

The head of the Immunology Department of the Canary Island government Amós García Rojas on July 3rd explained that due to the rise in cases on the islands, it would be “necessary to maintain certain restrictions”.

However, he did not rule out the need to “take measures” again, to protect the elderly and the vulnerable. “Perhaps the obligation to wear a mask indoors may be reintroduced if the situation does not improve,” he continued.

The Andalusian government has not commented on the general use of masks indoors but has insisted that they will not become mandatory again in schools and has also stated that they will continue to be required on public transport.

The Health Minister of the Balearic Islands´ government Patricia Gómez Picard has said that it’s “advisable” for the vulnerable to wear masks in indoor public spaces but has ruled out mandatory measures.

As face mask rules fall under national legislation and not regional, it’s up to Spain’s national government to decide and not the individual regions.

As the situation stands, the national Health Ministry has ruled out making masks compulsory again.

“We’re calling for caution as we always do when there is a considerable increase in the infection rate,” Health Minister Carolina Darias told journalists in early July.

“But when it comes to face masks, it’s a recommendation, because we’ve got an extremely high vaccination rate with 95 million doses having been administered”.

So it seems highly unlikely that masks will become compulsory again in all outdoor or indoor settings in Spain in the near future, despite rising infections.

It could well be that the indoor places where it’s still mandatory to wear a mask – public transport, health centres and care homes – continue to have this rule throughout the summer, perhaps even longer.

But a return to the across-the-board rule won’t happen unless any new Covid-19 subvariants have different and severe symptoms that escape the effectiveness of current vaccines.

The new Omicron subvariants BA4 and BA5 are more transmissible and research shows they can evade vaccination immunity, but their symptoms are milder than previous variants.

Remember as well that the fact that masks are not mandatory in almost all situations currently in Spain does not mean you shouldn’t wear one in certain situations where you think you could be more at risk of catching the virus.

You don’t have to of course, nobody is forcing you to anymore in almost all daily situations, but it’s up to you if you’d rather wear a mask for a few minutes or feel unwell for several days, as well as potentially infect your loved ones who are vulnerable.