The vaccine mandate is set to automatically return in June - unless the government does something about it.

Austria’s Federal Government has a ticking time bomb on its hands: an ordinance that suspended its vaccine mandate law is set to expire by the end of May, which means that the controversial mandatory vaccination would be again in place as early as June 1st.

In order to keep that from happening, Austria’s Health Ministry needs to extend the current regulation or create a new one.

If it doesn’t, the Covid-19 mandatory vaccination law would automatically be back in June.

Since, by June, the vaccine mandate stated that non-vaccinated would start getting fines, the resumption of the law would mean that, from next month, those who are not vaccinated could be fined in routine checks, such as traffic checks.

The ins and outs of the vaccine mandate

The law was first introduced in February, even though the technical requirements for it to be enacted were not in place. The first stage of it was purely “informational”, and Austrian residents received letters explaining about vaccines and about the regulation.

A second stage, when people could have been fined if they were not vaccinated, was set to start in mid-March. Before a single person was fined, though, Health Minister Johannes Rauch (Greens) suspended the law with an ordinance.

The law was suspended for a variety of reasons, primarily due to the relatively high vaccination coverage the country had already received, along with the lower virulence of the Omicron variant.

To create a new regulation or extend the existing one stopping people from being fined, Rauch must await the report of the vaccination commission, which should be ready in May, according to the Ministry.

The coronavirus commission will assess whether the Vaccination Act is suitable and useful from a medical and legal point of view. A previous report said there were arguments for and against mandatory vaccination for those who were completely unvaccinated.

Der Standard reports there is little political support for compulsory vaccination and says there are still technical problems regarding automated fines. However, according to the Ministry of Health, the infrastructure should be completed in June. 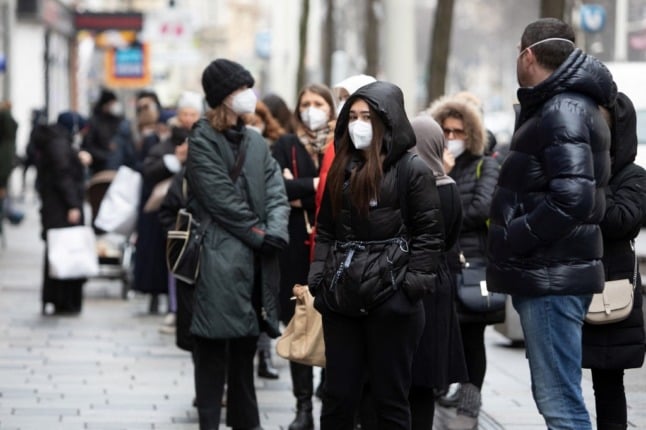 Austria will remove the mandatory self-isolation requirement for people who test positive for Covid-19 from August 1st, Health Minister Johannes Rauch (Greens) said in a press conference on Tuesday.

People who do not feel sick will be allowed to leave their homes even after a positive Covid-19 test but will have to follow specific requirements, the Austrian federal government said.

“We believe we have a good balance now”, Rauch said.

The so-called “traffic restrictions” mean that those who don’t feel sick will be allowed to leave their homes but must wear an FFP2 mask indoors and outdoors whenever social distancing is not possible.

The health minister said that people who feel sick should call their doctors and ask for a sick leave.

READ ALSO: What are the fines for not wearing masks on Vienna’s public transport?

However, employees of these areas will be allowed to go to work – with the mask mandate – even if they are infected. The only exceptions are professions that are made impossible to do with a mask on, such as speech therapists and musicians.

The restrictions are valid for a maximum of 10 days and as soon as there is a positive antigen test. But a negative PCR test (or PCR test with a CT value over 30 as shown in the laboratory results) allows people to leave the “traffic restrictions” after the fifth day.

In the case of restaurants and bars, people are allowed to go inside, sit and chat but must wear a mask at all times – meaning they cannot consume food and beverages.

“We cannot live this degree of pandemic-related crisis mood for years”, health minister Johannes Rauch said. However, he added that if the situation appears to be getting worse again, the government will impose stricter measures.

He reiterated that the pandemic situation has reached a new stage. “We have the vaccine, we have medication, people are getting milder courses of the disease than before”, Rauch stated.

Labour minister Martin Kocher (ÖVP) said risk groups should be protected, and a specific ordinance is being prepared for workplaces where there are people at risk.

Kocher said that companies will be able to work out measures such as work-from-home schemes for people at risk. Additionally, workers that belong to vulnerable groups could be exempted from work by presenting a “risk certificate”.

SPÖ health spokesperson Philip Kucher said that the government had abandoned the pandemic management, calling a lifting of isolation requirements “irresponsible and dangerous” and demanding a proper pandemic response plan for the autumn.

“A quarantine end for infected people would be dangerous and could bring the health care system back to its limits. An irresponsible and dangerous game”, he wrote in a statement.

READ ALSO: ‘At the limit: Huge spike in Covid hospitalisations and deaths in Austria

Austria’s federal government can set up the minimum requirements for the country, but individual states could impose stricter rules.

Vienna’s Mayor Michael Ludwig said he thought the relaxation was a “step in the wrong direction”, but if quarantine is abolished at a national level, the Austrian capital will not go a different way and keep quarantine, as it would be too difficult to implement with the city receiving 300,000 commuters every day.

Gabi Sprickler-Falschlunger, the Vorarlberg SPÖ state party leader, says it is undoubtedly the “wrong decision” and predicts a sharp rise in Covid-19 infections.

On Tuesday, Austria recorded 9,213 new coronavirus cases after 125,571 PCR tests, according to the Health Ministry.

There were 1,604 people in hospitals with Covid-19, 56 more than the day before, and 93 in intensive care units (five more than the previous day).

Currently, just 60.2 percent of the population has valid immunological protection – meaning a combination of vaccines and/or recovered status accepted by the federal government.