The low-cost provider, which is offering 10 franc (10 euro) tickets between Berlin and Basel, among other cheap fares, arrived for the first time at Basel-Bad train station on Thursday evening. The station is situated on Swiss soil, but is operated by the German railway company Deutsche Bahn.

Flixtrain’s maiden arrival sparked criticism from Switzerland’s Transport Staff Union (SEV), which said the train is operated by underpaid subcontractors and has announced it would “track down any attempt to underbid in terms of salary, training and working conditions”.

“We will never accept companies that run on rail in Switzerland without a collective labour agreement and with working conditions unworthy of the name”, said SEV’s president, Giorgio Tuti.

READ MORE: What is a Swiss collective bargaining agreement — and how could it benefit you?

The low-cost company, which has been establishing itself Deutsche Bahn’s major competitor Germany over the past few years, runs long distance bus and train services.

When will the services run?

The lines to and from Basel run from Thursday to Monday, with one connection per day in either direction.

It will take 8 hours and 45 minutes from Basel Badischer Bahnhof to Berlin Hauptbahnhof.

A trip with the German ICE will instead take just over 7 hours.

The new line is part of an expansion of services which is set to include around 70 destinations in Germany.

OK but will it really cost CHF10?

The price of the ticket grabbed headlines, with Flixtrain saying in its press conference that the almost-nine-hour trip would only cost CHF10 (10 euro).

Flixtrain spokesperson Sebastian Meyer told Swiss news outlet Watson that tickets would start at CHF10, but more expensive tickets would be available when the CHF10 offerings were sold out.

“If the cheapest ticket contingent is sold out, the next higher one takes effect. In this way, we can always offer our passengers cheap tickets. Affordable prices are still possible due to the corresponding utilisation of the individual trips.”

In order to get the cheapest possible fare, travellers are advised to book early.

REVEALED: How to find cheap train tickets in Switzerland

Tickets between Basel and Berlin can cost as high as CHF150 or 160 euros from Switzerland’s SBB or Germany’s Deutsche Bahn respectively, although booking in advance can bring the price down to as low as CHF30.

Where will the train to (and from) Berlin stop?

In either direction, the train will stop at: Karlsruhe, Baden-Baden, Offenburg, Freiburg, Wiesloch, Bad Hersfeld and Weil am Rhein.

What else is different about Flixtrain?

Other than being bright lime green, Flixtrains allow you to take your bicycle with you, which is not allowed on most ICE long-distance trains in Germany.

Are there any other destinations within Switzerland?

As yet, Basel will be the only Swiss destination. The other two new routes are Stuttgart to Hamburg and Berlin to Weisbaden.

In addition to the 10 franc (10 euro) ticket from Basel to Berlin, other journeys within Germany will start at 5 francs (5 euros).

More information is available from Flixtrain at the following link.

The expanded routes can be seen in the following image. 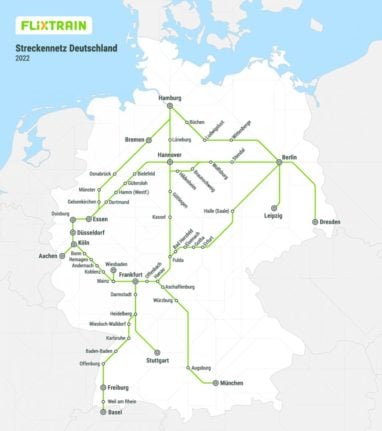 A look at Flixtrain’s route network in 2022. Map: Flixtrain

“The clear conjunction of a much quicker recovery with a very tight labour market is creating a lot of problems,” Olivier Jankovec, head of the Europe branch of the Airports Council International (ACI), told AFP.

He said there were issues from airports to airlines, ground handlers, police and border controls, but insisted: “The system still works”.

“It’s important for passengers that they communicate with the airlines in terms of when they should get to the airport, and prepare to come earlier than usual to make sure to have the time to go through, especially if they have to check luggage,” he said.

Strikes by low-cost pilots and cabin crew across Europe – including this weekend – are adding to the disruption.

Speaking at the ACI Europe annual congress in Rome, Jankovec said airports had taken measures to improve the situation, which would come into effect from mid-July.

“Additional staff will be coming in July, the reconfiguration of some of the facilities and infrastructure to facilitate the flows will also come into effect in July,” he said.

“But I think that in the vast majority of airports, the traffic will go, people will not miss their planes, and hopefully everybody will be able to reach their destination as planned.”

He also defended increases in airport charges, after criticism from the International Air Transport Association (IATA), which represents airlines.

Airports face “the same difficulties and inflationary pressures” as airlines, which he noted were putting their fares up, he said.

“Staff and energy is 45 percent of our operating costs, and of course inflation is also driving up the cost of materials,” he said.