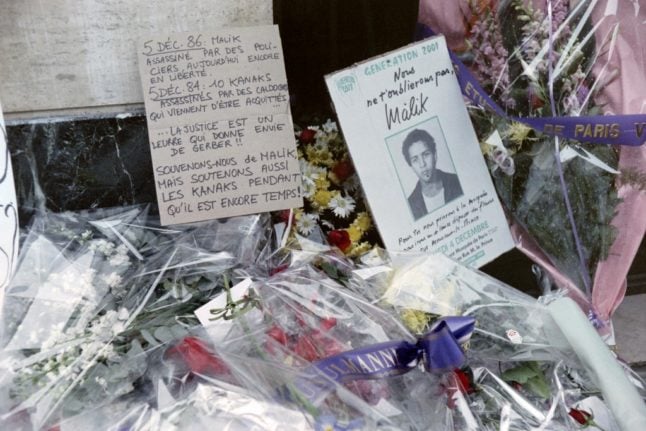 Flowers and letters on the spot in Paris where Malik Oussekine died at the hands of the police. Photo by Michel GANGNE / AFP

The latest French show to grab ahold of international audiences, “Oussekine” a Disney+ mini-series of four episodes, reinvestigates a dark part of France’s history. It became available for streaming worldwide on May 11th, and is available in English.

Long before Adama Traoré, whose death ignited Black Lives Matter protests across France, was the night of December 6th, 1986, when two police officers beat to death the 22-year-old French-Algerian on the sidelines of a student protest in Paris.

He had not been involved in the demonstration, and his killing became a turning point – triggering weeks of unrest and leading to the unprecedented conviction of the officers. 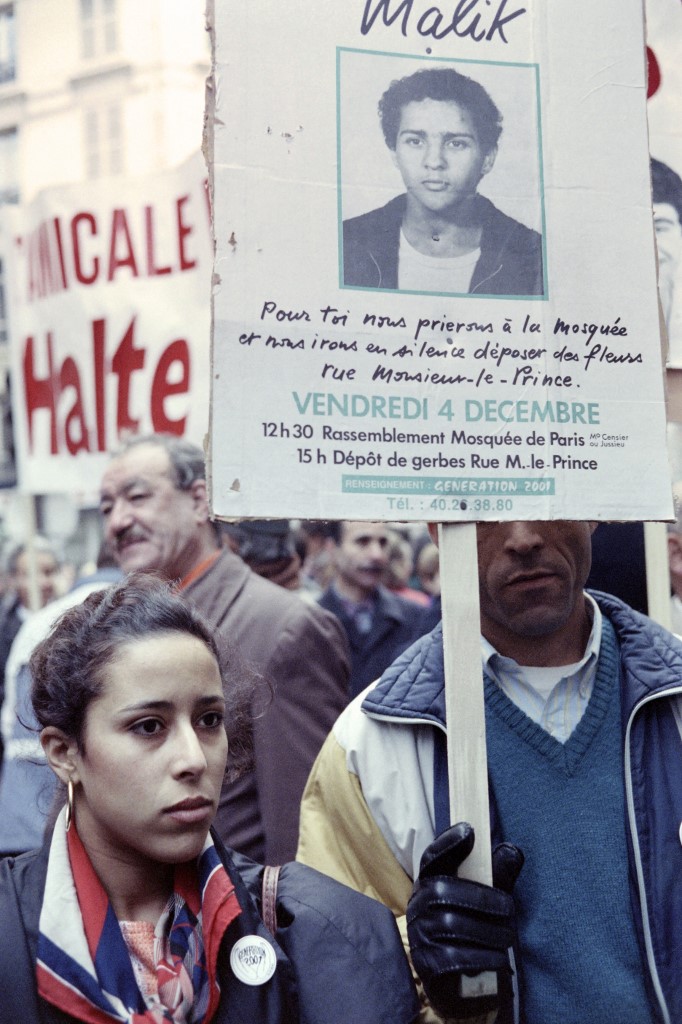 A march in memory of Malik Oussekine on December 4, 1987, a year after he was killed by the police (Photo by Jean-Loup GAUTREAU / AFP)

While Oussekine’s name has continued to reverberate among minorities, his story has never been adapted for the screen until now.

As if making up for lost time, two versions are being released this month: a film, “Our Brothers”, premieres at the Cannes Film Festival, and the Disney+ mini-series, “Oussekine.”

“He was attacked because of the colour of his skin. He is France’s Arab George Floyd,” historian Pascal Blanchard told AFP, referring to the African-American whose death at the hands of police in 2020 sparked massive international protests.

He said much of French society had allowed Oussekine’s story to be brushed under the carpet as with so much of its troubled history with immigrant populations.

“It’s not a question of whether Malik Oussekine has been forgotten, but by who?” said Blanchard.

France is still wrestling with the trauma of its colonial period, particularly the bloody war of independence in Algeria from 1954 to 1962.

Among its darkest moments was the massacre of up to 200 Algerian protesters by police in Paris on October 17th, 1961 — many of them shot dead and their bodies thrown into the Seine.

The events of that day went officially unacknowledged for decades until President Emmanuel Macron finally described them as “inexcusable crimes” at the 60th anniversary last year – though without apologising.

Oussekine’s death was crucial in marking the end of total police impunity – the first time that officers were convicted for this type of crime, according to the family’s lawyer, Georges Kiejman.

As the grandchildren of the original wave of North African immigrants come of age, there is increasing interest and willingness to address the past.

“For our generation, it is important to say that these individual stories form part of the French national story. They are not separate. These are French stories,” said Faiza Guene, 36 and born to Algerian parents, who helped write the screenplay for “Oussekine”.

Its director, Antoine Chevrollier, was part of the team behind hit spy series “The Bureau”, and the lauded political saga “Baron Noir”.

“The important thing is to make this name and this story resonate so that we never forget,” he told AFP.

Chevrollier, who grew up in a small village in the Loire Valley, says he only became fully aware of the power of Oussekine’s name when he moved to Paris and began to hang out with people from different backgrounds.

“I hope the series will help ease the tensions that are unsettling the country. It is time that we in France begin to treat these historical cancers.”

After the recent death of Queen Elizabeth II, France has turned its gaze toward the United Kingdom and its monarchy. As French television channels and news websites frequently update about British royalty, you might be wondering about the French kings and queens.

How much of a French monarchy expert are you?

Take this quiz to find out: