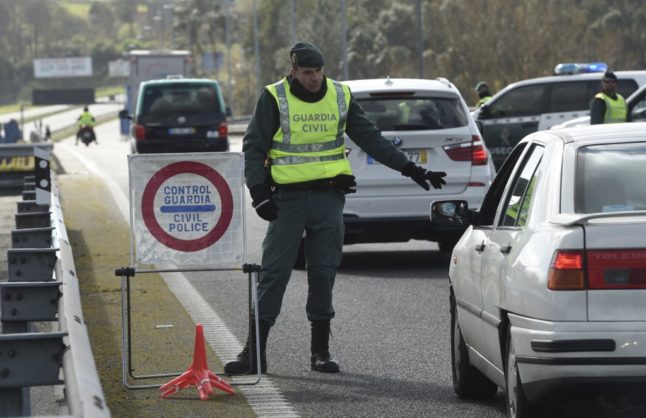 Residents in Spain who after 6 months have either not exchanged their licence for a Spanish one or passed their Spanish driving test can be fined €200 by Spanish police if caught behind the wheel. (Photo by MIGUEL RIOPA / AFP)

”If you have been resident in Spain for longer than six months, your UK-issued licence will no longer be valid to drive here from May 1st (2022),” Elliott said in a Facebook video.

“We’re not there just yet. And we will not have reached an agreement in time for the end of the current grace period (April 30th),” he added about the ongoing talks between Spanish and British authorities.

“The majority of UK licence holders in Spain registered their intent to exchange, as they were advised to, before December 31st 2020,” the UK Embassy in Madrid told The Local Spain.

“They are therefore unaffected.”

The UK Embassy told The Local that this will primarily affect three groups:

“This also applies to Gibraltar licence holders who are resident in Spain,” embassy sources point out.

It’s worth remembering also that this announcement does not affect visiting motorists from the UK or Gibraltar or UK licence holders who have just moved to Spain (first six months of residency), or British tourists visiting Spain.

What will UK licence holders living in Spain have to do now?

Negotiations are ongoing so there is a possibility that UK licence holders living in Spain will regain their driving rights without having to sit their driving exam again in Spain.

However, the advice from the Embassy for those most affected is to start preparations to get a Spanish driving licence.

“If you are affected by this change and need to drive, you should not wait for the outcome of the negotiations and should take immediate steps to apply for a Spanish licence – as we have been advising for some time now,” they stated on the Facebook group Brits in Spain.

“Driving a vehicle without a valid licence is illegal in Spain,” the UK Embassy has stressed.

So if residents whose UK licences ceased to be valid in Spain on May 1st 2022 were to still drive and be stopped by Spanish police, they face a €200 fine, according to Spanish road law CON 001 1 5B.

An international driving permit is not a way to get around this problem.

What will the Spanish driving test involve for UK licence holders?

There has been some confusion over whether UK licence holders who couldn’t exchange would have to do only the practical test, or the theory as well, in the increasingly likely event that they will have to sit their Spanish driving test.

The UK Embassy in Madrid has clarified that the Spanish driving exam includes taking both a theory and practical test, which would be applicable to UK licence holders getting their Spanish licences, as it is for other non-EU licence holders six months after they move to Spain.

“In addition to taking these tests, you will be required to provide a psychophysical aptitude report from an authorised Driver Centre and pay a fee,” the UK Embassy told The Local Spain.

“Most people choose to prepare for the theory and practical tests using the services of an official driving school. However, you are not obliged to do so.”

One of the main concerns for drivers who didn’t manage to exchange their licences, especially those who are not fluent in Spanish, is that the practical test is always carried out with a Spanish-speaking examiner. You may however find driving schools with English-speaking instructors.

The theory test can be done in English.

Why have negotiations taken so long?

The vast majority of EU nations have reached successful agreements with the UK over reciprocal driving licence recognition and mutual exchange of licences.

But after more than a year of negotiations and four grace periods, there is still no ‘Spanish deal’ and no more extensions to give UK licence holders.

“The UK Government asked the Spanish Government for an extension in early April but unfortunately this has not been possible,” the UK Embassy told The Local.

“We are continuing negotiations at pace and are asking for interim measures to be put in place by the Spanish, to minimise the disruption on UK licence holders.

Ambassador Hugh Elliott added that UK and Spanish authorities had agreed to “rapidly accelerate talks” during the week of May 2nd to May 8th.

So what’s the reason behind the hold-up?

“Every negotiation is different,” the UK Embassy told The Local.

“In this instance, Spain has asked for data provision to form part of the agreement.

“This was not requested by other EU Member States and is part of Spain’s nationwide ambition to improve road safety. As such, this has naturally taken more time than all the other agreements which the UK has been able to complete.