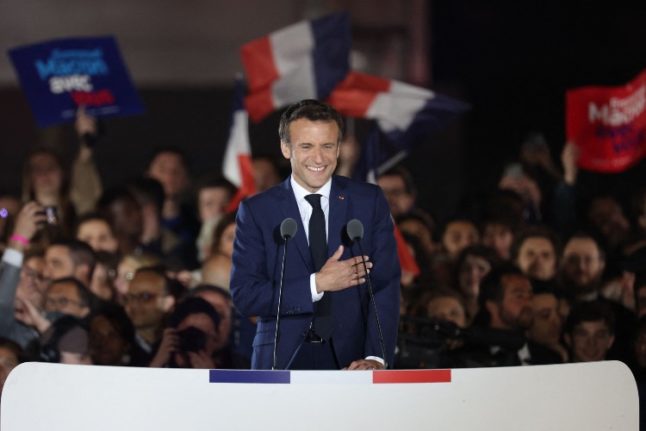 Emmanuel Macron, President of France, celebrates with his supporters on the Champ de Mars on Sunday. Photo: dpa/AFP | Thomas Coex

“Your voters have sent a strong vote of confidence in Europe today. I am happy that we will continue our good cooperation,” Scholz, of the Social Democrats (SPD), wrote on Twitter.

The final results were released shortly before 2am and had the centrist incumbent Macron on 58.55 percent of the vote, beating his far-right rival Marine Le Pen who took 41.45 percent.

Macron is the first French president to win a second term for two decades, but Le Pen’s result also marks the closest the far-right has ever come to taking power in France and has revealed a deeply divided nation.

Saskia Esken, chairwoman of the SPD, told Deutschlandfunk that she was delighted at the result but said that more needed to be done to oppose the extreme right.

“The whole of Europe has the task of also counteracting these tendencies, also to ensure that people feel more strongly connected to politics than is apparently the case in many places at the moment.”

German Finance Minister Christian Lindner described the French election as being “about fundamental questions of values.”

“The French have decided in favour of Macron. Thus, a united Europe is the biggest winner of this election,” said Lindner, who is leader of the liberal Free Democrats.

Green Party leader Omid Nouripour said that European should take the “normalisation of extremist discourse” in the French election campaign as a warning. “It is necessary to stand up with all our strength for democracy and freedom and defend our European values,” he said.

Opposition leader, Friedrich Merz of the CDU, welcomed the result and said that “now a new start for Franco-German cooperation is possible and necessary!”

Merz’ ally in Bavaria, CSU leader Markus Söder, described Macron’s victory as a “good signal for Europe” which showed that “unity and cohesion are particularly important at the present time.”

The far-right Alternative for Germany (AfD) party also expressed their satisfaction with the result after Le Pen improved on her performance in 2017, when she also faced Macron in the final round.

“Emmanuel Macron’s victory is an illusion,” AfD chairman and lead spokesman Tino Chrupalla. “The change of course in Europe is a reality and cannot be stopped in the long term.”