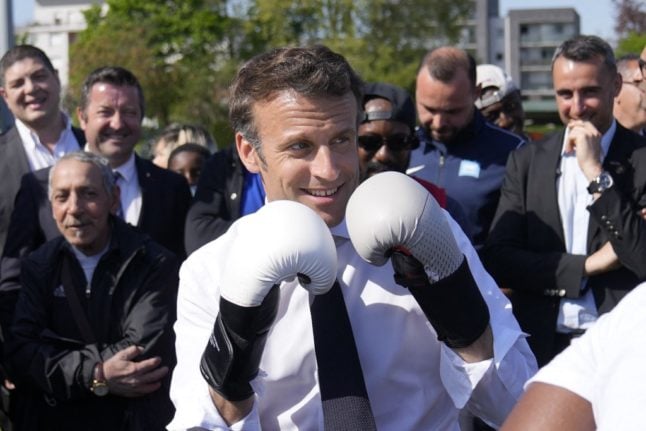 His polarising effect on voters has sparked myriad media articles, books and countless TV debates, none more so than during the violent “yellow vest” protests against him in 2018-19.

“There’s a sort of hatred that he concentrates that we’d never encountered before,” veteran journalist Nicolas Domenach, who has written a second book on the 44-year-old, told AFP.

“It’s something that has been present throughout his term in office and comes to the surface quite brutally,” added the co-author of “Macron: Why So Much Hatred?”

Only ex-president Charles de Gaulle inspired such visceral rejection by part of the population while in power, Domenach said, mainly because he granted independence to Algeria in 1962, which was viewed by critics as a betrayal.

Yet so far, an average of polls shows Macron him with a narrow lead of 55 percent versus 45 percent for Le Pen going into Sunday’s vote.

Some have theorised that Macron’s “top of the class” persona rubs some people up the wrong way, as does his uncompromising way of talking and intensely centralised style of governing.

His association with finance and business thanks to a stint at the Rothschild bank, coupled with his schooling in top universities, also make him elitist in the eyes of many.

This was reinforced by major gaffes early in his term such as when he told an unemployed gardener he could simply “cross the road” and find him a job.

“He crystallises a sort of class hatred that is very deeply rooted in French society,” said historian Jean Garrigues, who is researching the role of hatred in politics for a new book.

“He appears to some as an almost archetypical example of the privileged and elite classes, the French of the rich,” he told AFP.

Protests against Macron have regularly seen a return of the imagery of the ultimate class conflict: the 1789 French Revolution that saw the monarchy deposed and king Louis XVI beheaded.

Effigies of Macron have been guillotined in public, while pictures of his face were stuck atop spikes during some “yellow vest” marches.

“There was a revolutionary dimension to it, a spirit of insurrection,” Igor Maquet, a veteran of the “yellow vest” protests in Nantes, western France, told AFP.

Le Pen, despite coming from a far more privileged and Parisian background than her opponent, has sought to portray herself as a voice of the downtrodden.

But while Macron might be repellent for some, he scores much better than Le Pen in polls on other crucial measures such as perceptions of competency and having the stature of a president.

With her background in France’s xenophobic far right, Le Pen meanwhile is seen as “worrying” by as much as half the population, polls suggest.

Macron’s aides and friends have always been exasperated by his image, which they say contrasts with the charming and good-natured person they know in private.

“Macron loves people,” a senior MP told AFP recently, adding that the president and his wife Brigitte were bothered by the “gap” between his real personality and his political persona.

“He has huge ability to be empathetic but he still has this damned image of arrogance,” the MP added on condition of anonymity.

Macron himself theorised before being elected that the French were “regicidal monarchists” who loved electing a king-like president only to reject them.

“French political culture is extremely violent,” he told Le Point magazine last week. “I am very clear-eyed about that.”